Hull City paid the price for missed chances as Gillingham nicked a point at the KCOM Stadium. Tom Eaves put the home side in front early on, but Keane Lewis-Potter and Jacob Greaves both missed glorious chances as the home side will feel that it was a case of two points dropped. Oliver Lee scored the Gillingham goal after lax marking from a corner, and questions will be asked by Grant McCann about a possible foul on Alfie Jones at the back post who was unable to move towards the ball to defend the shot.

Gillingham got the game underway and could had had the lead after ten seconds. John Akinde struck an effort that just curled past Matt Ingram's far post. Soon after, great play from Greg Docherty and Lewie Coyle put in Eaves, but his effort went just wide in a frantic opening three minutes.

A goal mouth scramble saw Gillingham hit the post after the ball deflected off Vadaine Oliver in what was a let-off for the home side. Just before the ten minute mark, City were ahead. The ball was crossed in by Mallik Wilks following a throw in deep in the Gillingham half, and Eaves leapt highest to nod the ball down into the ground and see his effort kiss the post in go in.

It was clear that Gillingham's tactic was to fire it up to the front men as quickly as possible, with the forwards usually leaning into the home defenders to make it very difficult to head the ball. The referee clocked this on around 16 minutes, warning the away players of their treatment of Jones and Greaves.

After a driving run from George Honeyman on 18 minutes, Eaves nearly had his second. His effort was on the stretch, and it clipped the wrong side of the post and went out for a goal kick. Gillingham won a corner on 20 minutes, but it came to nothing. Both sides were playing a physical and fast-paced game, with the referee trying to let play flow as much as possible. Coyle's ball over the top almost saw Keane Lewis-Potter in, but couldn't quite reach it. Eaves then probably had too much time following an excellent run, and Greg Docherty was beaten to the ball on the six yard box after a pull back.

Gillingham started to test the home side with set pieces, long throws and long balls into the box with Steve Evans and Paul Raynor braying a the referee anytime they felt there was an infringement. A very clever corner kick routine from Honeyman saw the ball fizzed along the floor just before half time, with Docherty firing the effort over the bar.

Neither side changed things at half time and the second period started just like the first. Ryan Jackson's long throws continued to test the Hull City back line and Evans and Raynor were as vocal as ever. Honeyman's cross on 54 minutes may have touched the arm of a Gills defender, but the referee waved play on. Good play from Docherty and Lewis-Potter saw Wilks put in soon after, but Gills defended well. From the resulting corner, Greaves hit the bar from a yard out with a header and when he sees it back, he will be unsure how he didn't net his first Tigers goal.

Hull City won a free kick on 63 minutes after good work from Wilks, and after Gillingham cleared it Lewis-Potter crossed for Wilks once again. However, the forward couldn't get a clean strike and the ball drifted harmlessly wide for a goal kick. Gills drew level from a corner through substitute Lee - rather against the run of play. Alex MacDonald then committed perhaps the most cyncial tackle all season, chopping down Docherty at full speed to stop a counter-attack.

Wilks made a driving run with 15 minutes left and managed to win a corner, but poor delivery meant that it came to nothing. Coyle and Lewis-Potter linked up well and the former almost saw his cross drop into the far corner, but Jack Bonham managed to claw it away. Eaves was replaced by James Scott after a good shift against his former club. Honeyman's cross saw Lewis-Potter have a headed chance that flashed just wide. An effort just minutes later came even closer in what looked like two points dropped for the home side.

Lewis-Potter did well not to react to being dragged down on a counter attack by Tom O'Connor, and despite all their chances City nearly lost it at the death. Yet another long throw saw the ball hit the post before Ingram dived on it to protect the point.

Tigers punished for not taking chances

Despite taking an early lead, Hull City were profligate in front of goal. Tom Eaves scored, but could have had a second - but the biggest culprit was Jacob Greaves. He managed to hit the bar from two yards out, and his wait for his first goal in City colours continues. Keane Lewis-Potter came close with two efforts in what was not one of the home side's best performances. It could prove to be a costly game too, with Peterborough United winning 7-0 over Accrington Stanley as well as Alfie Jones limping off with an injury.

Right from the off, it was always going to be a tough game for the home side with Gills under Steve Evans. Fouls, elbows, and most of all shouting saw the away side profit from an endless barrage of claims from the touchline. They certainly kept the fourth official Bobby Madley very busy, constantly bemoaning any decision that didn't go their way.

Tom Eaves led the line very well in the absence of Josh Magennis, and he got his first goal since the 1st of December. He could have added to his total, but played well before being hooked for James Scott. It was a difficult day for the forward, with his physical presence actually being more of a hinderance than a help as the Gillingham defence went down at every opportunity to try win a free kick. It is clear that Gillingham's tactics are successful, as they have worked their way up the table - but they certainly don't play the most attractive football in the division.

Liverpool vs Newcastle United Preview: 6 cup finals to go for the reds to make the top 4 an hour ago

West Ham vs Everton Women's Super League preview: team news, predicted line-ups, ones to watch, previous meetings and how to watch 2 hours ago

Lincoln City vs Hull City preview: How to watch, kick-off time, team news, predicted lineups and ones to watch 17 minutes ago

Kyle Walker-Peters: The one that got away 21 hours ago

Arsenal vs Everton: Classic Encounters a day ago

Warm Down: Barnsley take huge victory in the race for the play-offs 15 hours ago

Arsenal vs Everton preview: Team news, ones to watch, predicted line ups and how to watch a day ago 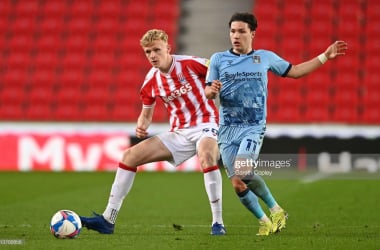