Undeterred by the absence of several key players amid a spate of illness within the squad, Notts County produced a resilient turnaround away at play-off rivals Dagenham & Redbridge through goals from Alex Lacey and one sliced into own net by home defender Will Wright.

It was a fiercely-contested clash befitting two sides separated by just a solitary place in the table prior to kick-off, with both knowing that three points at Victoria Road would be vital towards their ambitions, and Notts would ultimately claim them after withstanding a late barrage.

Dagenham, meanwhile, were left wondering how they'd thrown away a game in which they were initially so dominant. The opening 20 minutes signified a continuation of the brilliant standard they'd set across the preceding three games, all of which were won 3-0, with the attacking players employing a systematic high press to suffocate the visitors early on.

This yielded reward after only five minutes when Junior Morias broke the offside trap, calmly shook off the advances of a covering defender and assertively fired beyond Vítězslav Jaroš. The Jamaican frontman then missed another one-on-one before whipping an almost spectacular effort against the bar from distance. 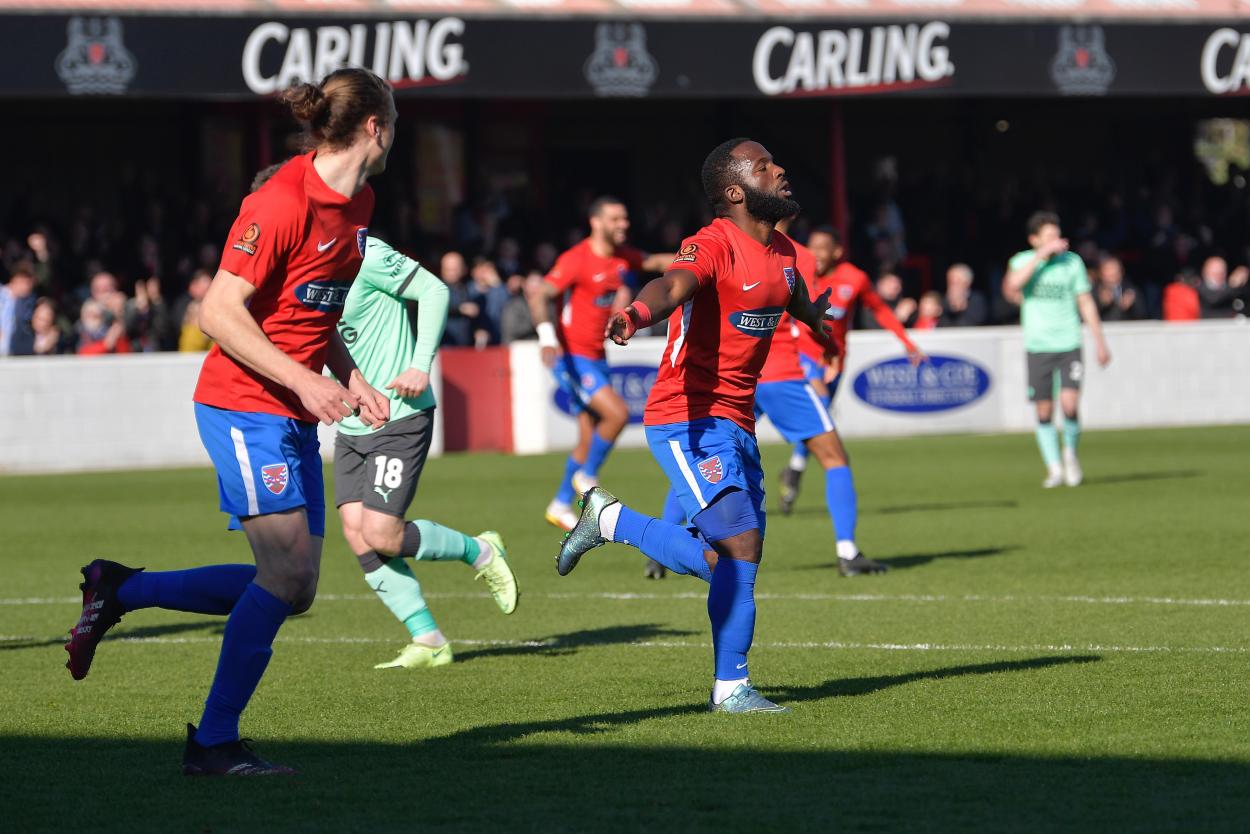 Junior Morias celebrates giving the Daggers a lead they would go on to relinquish. (Image: Dagenham & Redbridge FC)

However, with Harry Arter beginning to artfully control the tempo in a manner that belies the level he inexplicably finds himself at, Ian Burchnall's side began to dictate play more. There was something of an inevitability about the eventual leveller, which came via a powerful Alex Lacey header from Arter's quality corner-kick delivery on the cusp of the half-hour mark.

The Daggers had an opportunity to regain the lead in stoppage time when Paul McCallum nodded wide at the far post; while admittedly off-balance, it was one of several wasteful misses his side would be made to rue, as the half ended level.

Despite being forced into substituting influential defenders Lacey and Richard Brindley at the beginning of the second period, necessitating Adam Chicksen moving inside to centre half, County continued to be the livelier side in East London.

Their continued industriousness going forwards paid dividends when Jayden Richardson skipped beyond a feeble Myles Weston challenge, wrapping a deadly cross towards the back stick where WIll Wright could only clumsily poke into his own net under pressure from Kyle Wootton.

Jolted back into gear by this setback, the hosts launched a series of attacks that really should have resulted in an equalising goal. McCallum headed over from a central position around the middle of the box and they only ramped up the pressure from that moment onwards.

With time running out, his strike partner Morias saw a half-volley seemingly squirm beneath Jaroš before falling for McCallum, who could only scrape the post despite having an unmarked net gaping infront of him.

The introductions of Ángelo Balanta and Mauro Vilhete gave Dagenham a further dimension, the latter being put through on goal within moments of his introduction but somehow pulling wide as it increasingly seemed like it was going to be one of those days for them.

To compound matters, they struck the woodwork again deep into stoppage time, moments before the referee's whistle confirmed a backs-to-the-wall victory for the visitors, whose brilliance between roughly the 30th and 60th minutes proved the difference.

Jayden Richardson (Notts County) | A source of constant menace out wide, stretching Daggers' defence and providing an outstanding cross from which the decisive moment came.

A first victory this month sees Notts County climb into the play-off spaces, stealing crucial ground on a chasing pack that includes Dagenham. Burchnall's team face another stern challenge in midweek with the visit of Boreham Wood, while the Daggers go to Eastleigh in search of redemption.

Jurgen Klopp backs Sadio Mane to shine next season, even if his future is away from Anfield an hour ago

Tottenham boosted by &pound;150m ENIC investment as they look to back Antonio Conte 3 days ago

Seagulls soar to top half in spirited season 2 days ago