The Bundesliga is chock full of intrguing rivalries, but the Nordderby between Werder Bremen and Hamburger SV is surely one of the most well-known and long-standing, with the Weserstadion playing host to the 103rd Bundesliga battle between these two Northern rivals.

It could have just as well been the first, because there was absolutely nothing that felt stale or old about a wonderful match which saw the visitors grab a deserved 3-1 win thanks to Ivo Ilicevic, Michael Gregoritsch and Nicolai Müller, with Anthony Ujah netting the eventual consolation.

Both sides came into the game riding on vastly differing results, with the Rothosen from Hamburg defying the bookies with a superb 3-1 win over Borussia Dortmund. To put it into perspective, HSV are the only side other than Bayern Munich to beat Thomas Tuchel’s men in domestic football this season. No mean feat at all. Bremen, on the other hand, were hammered 6-0 by VfL Wolfsburg in a game that will surely be erased from the memory banks of fans as quickly and quietly as possible.

However, if one considers the fact that the Werderaner have won six of the last eight games between these two sides, and the nature of these adrenaline-filled derbies, it truly seemed to be anyone’s game before kickoff. However, come the first whistle, that balance immediately disappeared and saw one team take the clash by the scruff of the neck.

Come the first whistle, balance immediately disappeared and saw one team take the clash by the scruff of the neck

It was the visitors who flew out of the blocks catching the Werder defence cold with Ilicevic scoring after a swift breakaway, assisted by Pierre-Michel Lasogga, in the second minute. Claudio Pizarro, who has scored 19 career goals against HSV in his storied career, forced Rene Adler into making a save a few minutes later as Bremen tried to get themselves level, but the lack of power in his volley ensured that the Rothosen stopper did not have his abilities tested all too much. HSV continued to threaten the Bremen goal on a more regular basis than their rivals, with Gideon Jung and Gregoritsch having shots on goal, the former with a header from a tough angle and the latter seeing his effort from outside the box saved by Felix Wiedwald.

In the 24th minute Hamburg manager Bruno Labbadia was forced into a premature change in personnel as the provider of the game’s first goal, Lasogga, was forced off with an injury, Sven Schipplock being called upon as replacement. HSV extended their lead three minutes later through Gregoritsch’s free-kick, placed exquisitely into the top left corner of the goal after Florian Grillitsch conceeded the foul.

In the true spirit of a derby game, the fouls came in thick and fast as the two sets of players jostled for possession – Seeing Bremen’s Fin Bartels joining the previously booked Gotoku Sakai on a yellow. Bremen desperately looked for an opening to get themselves within a goal of HSV before the break, but Ujah could only head wide a good cross from Zlatko Junuzovic after half-an-hour had been played. Thus Hamburg held a two-goal cushion going into the second half in an intense and hugely entertaining opening 45 minutes.

The second half started at a furious tempo, with the home side looking to appease their fans and turn around their fortunes against their rivals. Santiago Garcia had an opportunity from near the six-yard box after 50 minutes, but failed to keep his shot low enough to trouble the keeper, before Bartels on two occasions and Grillitsch failed to trouble Adler with their shots during a particularly active two minutes of action.  However, after Assani Lukimya’s 54th minute yellow card the momentum shifted back to HSV, with Sakai, Müller and Ilicevic causing problems for the Bremen defence. But the Werderaner were handed a glimmer of hope after 62 minutes, as Ujah finished tidily after a Philipp Bargfrede corner. Were we in for an epic fightback from the home side, or did Hamburg have another goal or two in them? The answer was an emphatic yes to the latter question, as Müller restored the two-goal buffer for the Rothosen only six minutes after Ujah’s strike, to prove the old saying right that you are at your most vulnerable having just scored.

As the game opened up even more with Werder starting to run out of time, there was a blocked attempt for the home side, while both Ilicevic and Schipplock missing opportunities at the other end. Predictably, HSV were quite content to slow down the game and see out their lead, while Bremen desperately tried to win the ball back at every conceivable opportunity and create something in attack, while also throwing on youngsters Levin Öztunali and Maximilian Eggestein to inject some freshness into the forward line.

With desperation now beginning to set in, the final few minutes disintegrated into something of a disorganised and stop-start affair, as the inevitability of the result started to set in for both teams. Ahmet Arslan’s 90th minute appearance at the expense of the consistently threatening Ilicevic was a symbolic move from Labbadia confirming that the game was over, and that the Rothosen had made the absolute most of the confidence boost gained from the Dortmund win to triumph over their rivals in a Nordderby that certainly lived up to the billing. 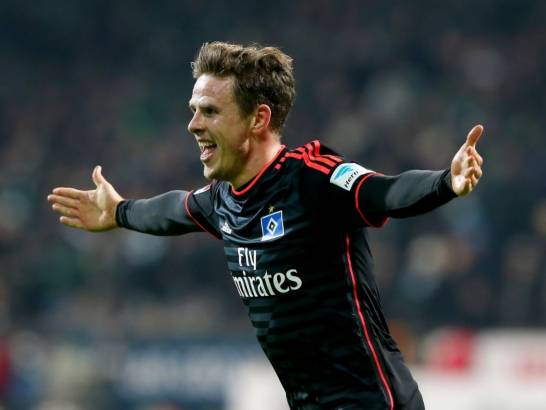 After this result, Viktor Skripnik can look forward to a trip to struggling VfB Stuttgart, but the past two losses will not have done his job-security any good. Bremen face a struggle now to get out of the rut of a humiliating defeat and derby loss all within the last two weeks and try and get some momentum going before the Hinrunde comes to a close. Hamburg, on the other hand, know the word 'momentum' quite well for a change, heading into a home game with Mainz next week full of confidence. Considering their poor recent derby form, expect the HSV faithful to enjoy this win for some while yet after a performance which suggests that something more enjoyable than the now-cusotmary promotion-relegation battle at the end of the season looming on the horizon.

Borussia Monchengladbach vs Bayer Leverkusen preview: How to watch, kick-off time, team news, predicted lineups, and ones to watch a day ago

Bundesliga Matchday 24: Three things to look out for 2 days ago

Jahn Regensburg vs Werder Bremen: How to watch, kick off time, team news, predicted lineups, and ones to watch 5 days ago

RB Leipzig vs Borussia Monchengladbach match preview: How to watch, kick-off time, team news, predicted lineups and ones to watch 8 days ago

Bundesliga Matchday 23: Three things to look out for&nbsp; 9 days ago

Werder Bremen vs Eintracht Frankfurt: How to watch, kick off time, team news, predicted lineups, and ones to watch 9 days ago

Who will replace Marco Rose at Borussia Monchengladbach? 12 days ago
//