The Chicago Fire bottled it on Wednesday night, as they blew a 2-0 lead to ultimately tie D.C. United 2-2 at Soldier Field.

As mentioned earlier, Chicago scored the first two goals of the contest via a header from Gastón Giménez and a deflected cross from Miguel Navarro. They couldn’t hold on to their advantage, though, as Kevin Paredes pulled one back for D.C. before Ola Kamara completed the comeback from the penalty spot.

It was two points dropped for the Fire, but considering how poorly they played on the night, a draw is probably the most fair result.

The first chance fell to the away side after Nigel Robertha broke free on the counter. He could not convert, though, as he was denied by Bobby Shuttleworth.

After a pretty boring opening to the contest, Chicago took the lead just past the half hour mark. A cross whipped towards the edge of the area picked out Gastón Giménez, and he somehow managed to score from there, powering a header past Bill Hamid and into the back of the net.

D.C. really should have equalized before the end of the half. Yamil Asad was left unmarked in the penalty area, and a lay off pass got him the ball. He made a mess of the finish, though, hitting a first-time shot well wide of the target.

United once again came close following the break, but they would be turned away twice in the matter of moments. The first opportunity fell to Yordy Reyna, who got on the end of a cut back pass just a few yards out from goal. His shot was saved by Shuttleworth, though, and the rebound was then blocked by a defender.

They were made to rue those missed chances, as Chicago doubled their advantage in the 60th minute. It came via a stroke of luck, to be fair, as a cross from Miguel Navarro deflected off of a D.C. defender before flying into the back of the net past a helpless goalkeeper.

It was nearly 3-0 a bit later. Robert Berić received the ball on the edge of the area and turned brilliantly, creating space which allowed him to unleash a shot. It may have been heading for the side netting, but Hamid was able to get a hand on the attempt to force it away.

The away side finally grabbed a goal with about 10 minutes to go, setting up an intriguing end to the game. A low pass found Kevin Paredes in space, and his first-time attempt bounced off of the post and in to pull one back for United.

Their comeback would be completed just moments later. D.C. were awarded a penalty after Jonathan Bornstein took out Andy Najar in the area, and Ola Kamara stepped up to slot home the resulting spot-kick with confidence and composure.

That proved to be the final highlight of the contest, as neither side was able to find a late winner.

Ugly
This contest was tough to watch.

Chicago just never got going despite taking a two-goal lead. They looked disjointed going forward, and they didn’t create much as a result. Their opener came via a super header out of nowhere, and the other goal was due to a major deflection. Just when it seemed like they were set to secure the win and all three points, the Fire decided to shoot themselves in the foot, conceding twice late on to snatch a draw from the jaws of victory.

D.C. weren’t much better. They did have more goalscoring opportunities, but they failed to capitalize on them for most of the match. It was a disasterclass in finishing up until the 82nd minute, and it seemed like their wastefulness in front of goal was going to cost them. United didn’t do much defensively either, and Bill Hamid in particular seemed off of the pace for some reason.

In the end, neither really deserved to win, so at least the result was a fair one.

Man of the match - Bobby Shuttleworth

In a more fair world, Bobby Shuttleworth would have had a clean sheet.

He saved Chicago on several occasions, stepping up to make big save after big save. The goalkeeper kept the opposition at bay for so long, and it looked like all of his hard work was going to be worth it.

However, the Fire let him down. Shuttleworth couldn’t really do anything about either of the two goals he did give up, as woeful marking and careless mistakes were what led to D.C. scoring.

He still deserves praise for what he did earlier, though. Shuttleworth may have come to the club as just a backup, but he’s now become one of the team’s most important players.

Houston Dynamo 2-0 Chicago Fire: Getting what you deserve an hour ago

Philadelphia Union vs FC Cincinnati preview: How to watch, team news, predicted lineups, kickoff time and ones to watch 7 days ago

New York Red Bulls vs Toronto FC preview: How to watch, team news, predicted lineups, kickoff time and ones to watch 7 days ago

Seattle Sounders vs LAFC preview: How to watch, team news, predicted lineups, kickoff time and ones to watch 8 days ago 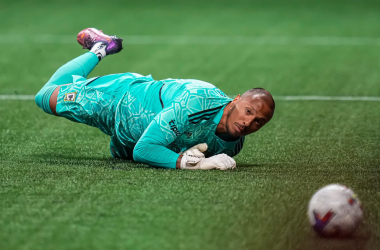 The Crew look to ride momentum 8 days ago
//