In 2012, Rafael Nadal crashed out of Wimbledon in the second round to world number 100 Lukas Rosol. It was one of the biggest upsets in tennis history. From that moment on, the Spaniard didn’t pick up his racket for over seven months. For the entirety of Nadal’s stellar career, he’s struggled with injury, and we’re used to seeing various body parts largely held together by sports tape. However, no injury threatened his career quite like tendonitis in his left knee did back in 2012 and early 2013. To fix a problem in his foot a decade ago in 2005, Rafa had special soles made for his shoes, and although that fixed the foot problem, it caused a whole spectrum of issues for his knees.

Nadal remained hopeful during his seven month lay-off, but one by one, withdrew from all tournaments until February 2013. The Spaniard missed major opportunities, including the London 2012 Olympics, the US Open and the Australian Open. The future for Rafa Nadal was uncertain, and when he finally stepped back on court in Chile, nobody knew what to expect, not even himself. However, the events over the next 11 months shocked the tennis world, as one of the greatest players of all time achieved one of the greatest seasons in the history of our sport.

Nadal had a win/loss of 75-7 and a 91.46% winning percentage by the end of the year, which makes 2013 statistically the best year of his career (so far). He won 10 titles, just one short of his best title-winning year, 2005. Out of those 10 titles, 5 were at a Masters 1000 level and 2 were Grand Slams, Roland Garros and the US Open. Nadal began his season at number four in the world, but throughout the year he battled back up to the summit of men’s tennis, ending 2013 as number one in the world for the third time in his career.

Rafa won the third BNP Paribas Open title of his career at Indian Wells in 2013, which was also his first Masters crown of the year. Previously in 2013, the Spaniard had won two tournaments on the clay at 250 and 500 level, but he had yet to succeed at the highest level, and out of his comfort zone of clay. At Indian Wells, Nadal defeated Roger Federer, Tomas Berdych and Juan Martin Del Potro back-to-back to pick up the title, his biggest for months. It was an emotional win for Nadal as he was once again considered one of the big names in tennis after being doubted at the beginning of his comeback. Dropping just two sets in the tournament, the title at Indian Wells was the first of many top level titles he would win that year. 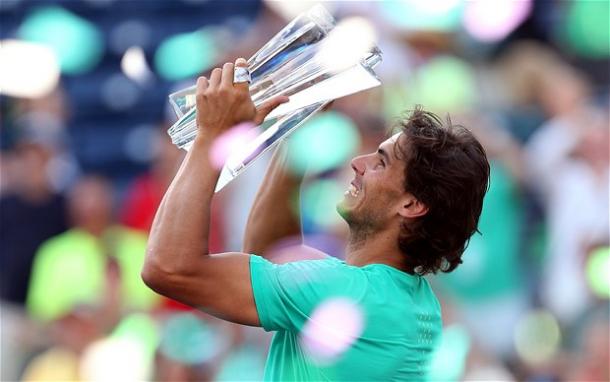 The spring clay season is typically the best segment of the season for the King of Clay, and 2013 was no exception. Nadal kicked off on the dirt in Monte Carlo, but fell short of a title in the final against Novak Djokovic. Despite this loss putting an end to his eight year winning streak at the Monte Carlo Masters, he would not lose another match on the clay that year. He bounced back at the Barcelona Open, winning his eighth title without dropping a set. In Madrid, Rafa defeated Stan Wawrinka in straight sets in the final to pick up his second Masters crown of the year. Then, at the Rome Masters, the Spaniard put together one of his best runs of the year, defeating compatriot David Ferrer, Tomas Berdych and Roger Federer back to back for another title, his seventh in the Italian capital.

Next up was Roland Garros, the home of Nadal’s clay court prowess. It was a gruelling two weeks, but by the end, the Spaniard was biting his eighth Coupe des Mousquetaires on the podium. Nearly all of his matches during the tournament were tough and lengthy, but his semifinal against Novak Djokovic was one of the most thrilling he’d ever played in his career. The showdown, which was over four and a half hours long, was labelled as one of the greatest matches in history, and the best ever on clay. Nadal came through the five set battle, 9-7 in the fifth, to book himself a place in the final once more. Two days later, Rafa walked on court looking as fresh as ever, and wrapped up a 6-3, 6-2, 6-3 victory over David Ferrer, claiming his eighth French Open trophy. "I never like to compare years, but it's true that this year means something very special for me,” explained Nadal after his victory.

"When you have a period of time like I had," he added, "You realize that you don't know if you will have the chance to be back here with this trophy another time."

It was one of his most emotional victories ever at Roland Garros, and rightly so. 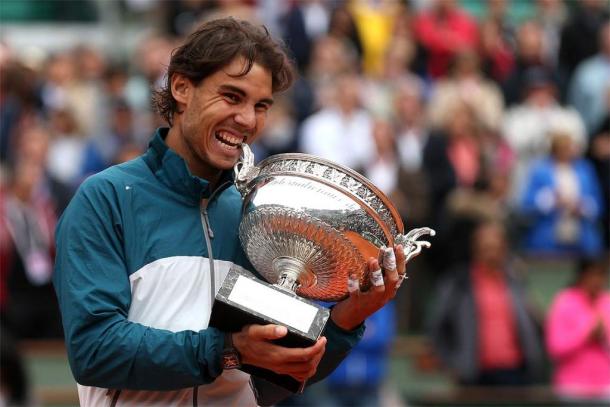 Rafael Nadal bounced back from a first round Wimbledon exit to Steve Darcis, winning every tournament he entered in North America, both Masters and the US Open. In Montreal, Nadal defeated top players including Djokovic and Milos Raonic to clinch the Rogers Cup, his best result in Canada since 2010. The following week, the Spaniard defeated Dimitrov, Berdych, Federer and John Isner consecutively to win the Cincinnati Masters in the United States, his 26th Masters title. The victory put him in a perfect position coming into the final Grand Slam of the year, the US Open.

Nadal cruised through his first three matches in New York City. He came through a four-setter against Kohlschreiber, then cruised once more against fellow Spaniard Tommy Robredo. In the semifinal, Rafa defeated Richard Gasquet, setting up another edition of the Nadal-Djokovic rivalry in the final. After four gruelling sets, Nadal fell to the floor having captured his 13th Grand Slam title, capping off his comeback. His aggressiveness on the hard courts was a key reason why he succeeded in the way that he did, as he broke from his usual method of staying very much on the defensive. His new approach on the hard courts proved to be perfect, as his performance, one that nobody expected, helped cement his season as one of the greatest ever. 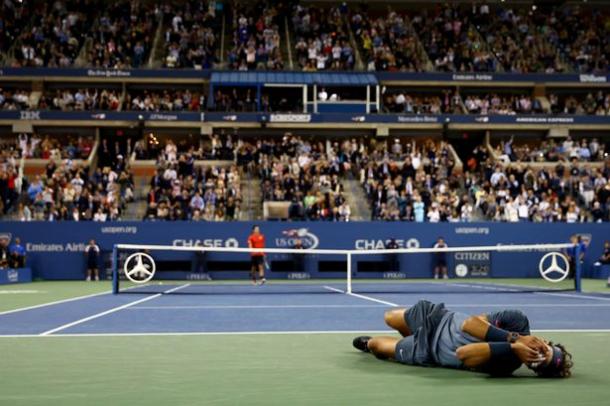 Rafael Nadal qualified for the ATP World Tour Finals once again, where he had another opportunity to compete for the one title that eluded him (and still does). He wasn’t able to pick up the final trophy of the year, but instead, winning his first two Round Robin matches gave him enough ranking points to finish 2013 as world number one. Not only was Nadal back to his best, but he was the best in men’s tennis once more. It was a perfect finish to an even more perfect season for Nadal.

Why Is It So Great?

The most astounding thing about Rafael Nadal’s 2013 season is that his jaw dropping results were totally unexpected. When a player comes back from a major injury, they normally take a considerable time to get back to their best - if they are able to. It almost took no settling in time for the Spaniard, he was able to compete against (and beat) the best almost instantaneously. The untouchable mentality that fueled his comeback in 2013 also made Nadal one of the strongest - if the not the strongest - players of all time. Nadal’s greatest season was his comeback year, unlike every other greatest season in tennis. 2013 proved that Rafael Nadal was not finished yet, and that once again, he was the man to beat.