Liverpool hosted Chelsea in the opening fixture of the Premier League weekend, in what was hyped up to be an interesting game between two of the top three sides from last season.

The last time these two met, the headlines were heavily fixed on Reds midfielder Steven Gerrard, whose unfortunate slip on the ball caused then-Chelsea striker Demba Ba to slot past Mignolet and break the deadlock before half-time to give the visitors a lead. They went onto win the game, and it has always been said that Gerrard's slip was the root of Liverpool's problems in terms of not winning the league.

The Reds narrowly missed out on league glory, whilst Chelsea suffered some disappointing form towards the end of the season in their road to silverware. Oh how it has changed significantly since May. Liverpool have sold many players, including talisman striker Luis Suárez, in a new-look side with the likes of Markovic, Moreno, Manquillo, Can, Lallana and Balotelli all joining the club.

And, they have struggled in truth this campaign so far. They somehow find themselves in 7th place in the table, despite having lost 4 games already this season which is higher than 12 teams in the division. Unpredictable form in both the league and the UEFA Champions League, sees Rodgers' side hoping for a surprise win against an in-form Chelsea team who have been billed as unstoppable.

Chelsea manager Jose Mourinho is a perfectionist, and he himself knows that his team is not perfect. A team can never be fully perfect, and there are still areas of side that need work in order to secure league title glory this season. City have faltered, Arsenal are there or thereabouts, United are struggling under new management and Liverpool are not in with a shout.

8 wins from a possible 10 with the likes of new summer signings Diego Costa and Cesc Fabregas both shining, and no losses suggests that the Portuguese man has done something right. Liverpool have sprung surprises before in the past, could they do it again today?

As the game kicked off, it would be interesting to see which side came out on top in the early battles for the ball in midfield, as well as aerial battles and who had the most chances. Chelsea, with all their attacking strength and depth, were forced to chase the ball as Liverpool did their best to pass around from the back and get forward when they wanted to.

German midfielder Emre Can came close with a deflected effort which swerved towards goal and had Courtois worried, but the ball eventually bounced out for a corner which was well defended by Chelsea's defence. Balotelli started the game well, making some encouraging runs towards the area to frustrate the Blues back-line, but was not found by his team-mates.

In the 9th minute, Can broke the deadlock with a power strike which took a lucky flick off defender Gary Cahill before swerving the opposite way in which Courtois had dived, to give The Reds an early lead at home. The young German could not believe his fortune, given the fact that he was selected to start and prove himself, AND scored within 10 minutes of the game. Chelsea felt aggrieved, and went suddenly on the attack. 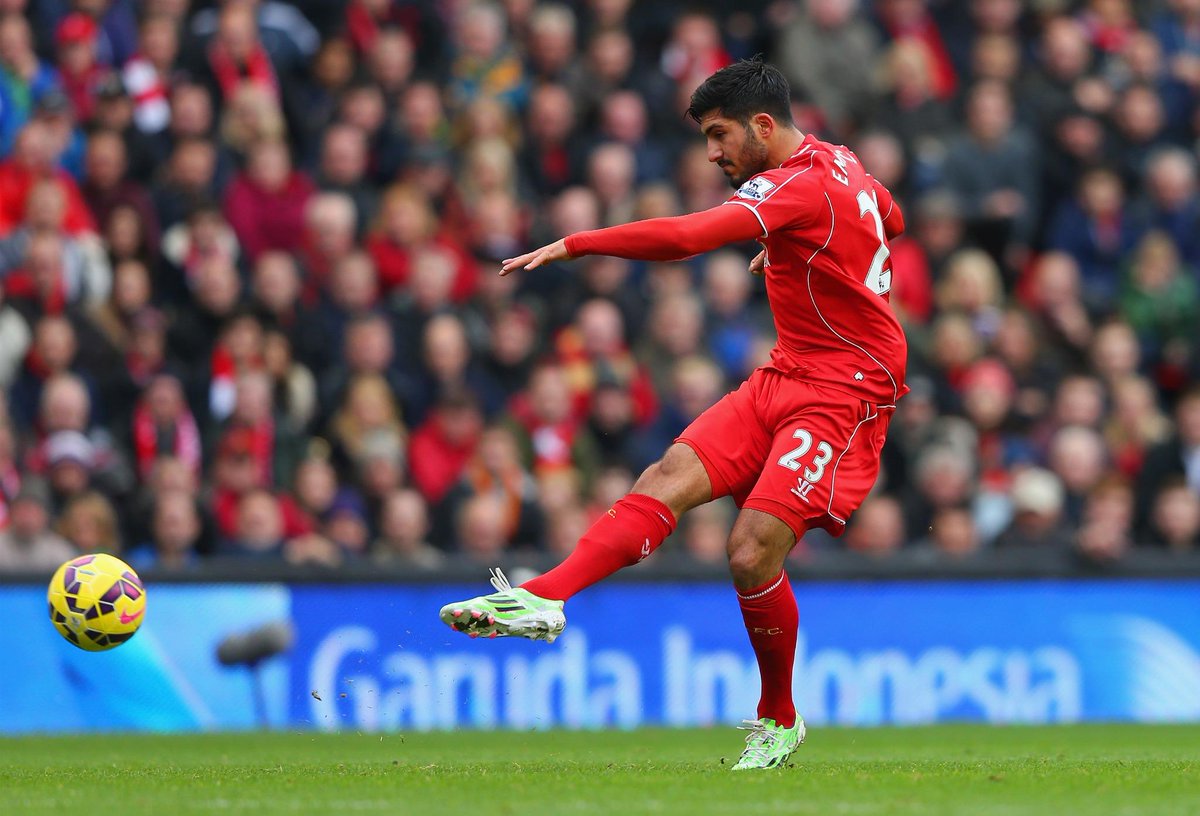 A great double save from Mignolet, from two close range efforts was in vain, as the goal-line technology notified the referee that the ball was over the line, after Gary Cahill's follow-up shot from the Belgian 'keeper's initial stop from fellow defender Terry was parried into the English centre-back's path. 1-1, and Chelsea equalised within 5 minutes of Can's opener! 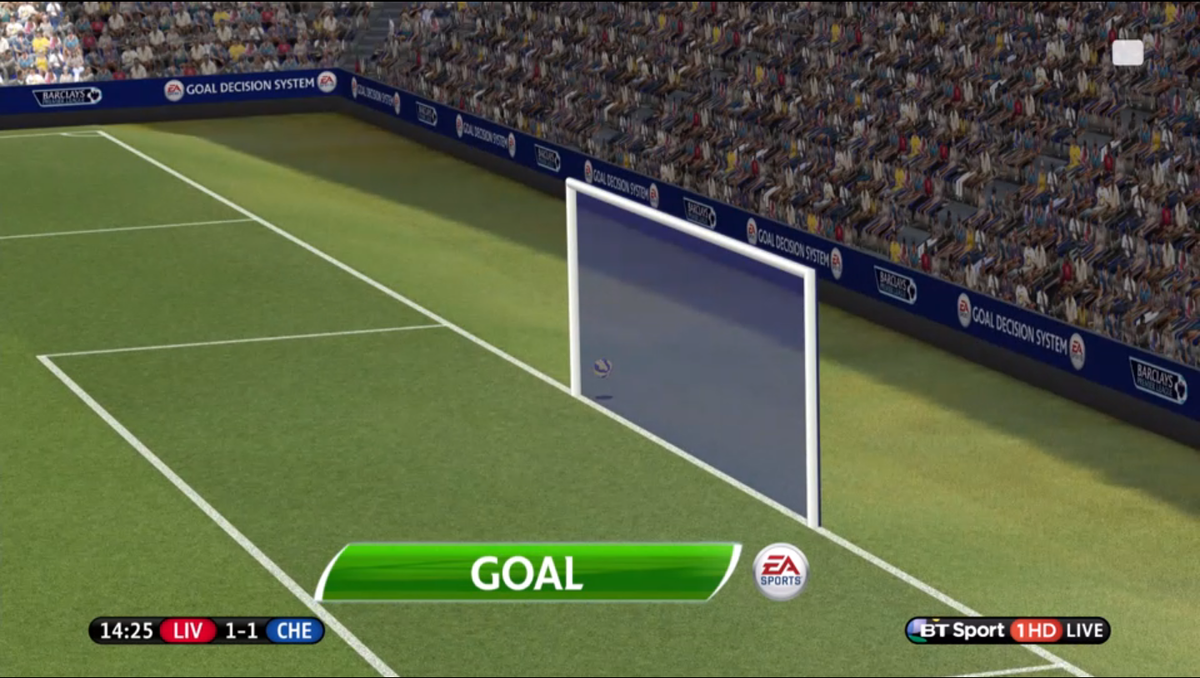 A dramatic start to the game in truth, with both teams looking desperate to take all 3 points. Balotelli put the ball in the back of the net soon after Cahill's finish, although the linesman had flagged for offside and it was ruled out. A goalmouth scramble just minutes later saw numerous penalty shouts from the Liverpool faithful, as young forward Raheem Sterling's power shot in the area was blocked by the hand of Cahill in the box. A corner was given, as the game started to hot up.

Two potential bust-ups in quick succession, as Balotelli and Terry locked horns at one end of the pitch whilst Costa and Skrtel were involved in a heated exchange of words, after the Spanish striker clearly barged into the back of Liverpool defender Skrtel.

The game burst into life, as both sides looked dangerous on the counter attack. Coutinho went on a jinking run, leaving Chelsea defenders trailing in his wake before having a low drive towards goal parried away by the diving stop from Courtois.

Vital blocks in quick succession from full-back Glen Johnson, was important to halt the attempted efforts from Hazard as he was bearing down on goal, looking ruthless in his search for a goal. The intense duo of Costa and Skrtel continued with their battle for supremacy in the Liverpool area, with the referee reacting quickly to avoid any potential conflict as he kept his cards in his pocket. 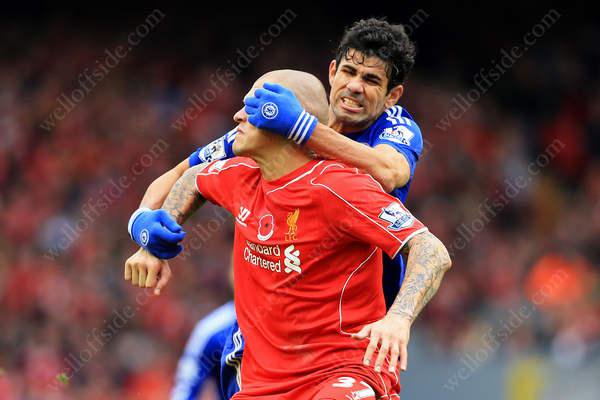 Hazard was denied by a low catch from Mignolet, as Costa and Sterling both probed the opposition defences with attemped ball-splitting passes but to no avail. Balotelli was lively, as he linked up well with the young English forward but was unable to get his name on the scoresheet before the interval.

Sterling was surprisingly given the first yellow card of the game, after he purposely blocked the attempted run by Ramires who caught him with his arm to try and push past him. The referee booked him, with that being Sterling's 3rd yellow card of the season so far. A costless-kick in a dangerous position, was not taken advantage of by the Chelsea players who did not make good use of the set-piece.

At the half-time whistle, the scoreline was still 1-1 with both sides having positives and negatives to take into the second period.

As the second-half begun, neither side had made any substitutions. Ivanovic was the second player to be written into the referee's book just minutes after the restart, for a blatant shirt-pull on Sterling in and around the Liverpool area.

A chipped through ball into the path of Costa from Hazard resulted in an acrobatic effort swerve over the bar, out of the reach from Mignolet. Cameras showed that Brazillian forward Willian was preparing to come on off the sub bench. He replaced Ramires soon afterwards in the 55th minute, as both teams came narrowly close to scoring again. First, Sterling weaved past Ivanovic in the area before seeing his low effort parried away by Courtois, before Hazard ran on the ball and sprinted into the area, only for his shot to be blocked with a last-ditch challenge from Gerrard.

The game started to get heated again, after Chelsea were adjudged to put the ball out of play following a knock suffered to Ivanovic in the centre of the pitch - however, Liverpool won the ball with the Serbian still down, and put the ball out themselves. Then, Balotelli was booked for a shove in the back of Oscar, before he argued his case to the referee with Liverpool players surrounding the referee suggesting that they were hard done by given the challenges in the first-half that were not given bookings to.

Chelsea pushed themselves ahead for the first time in the match in the 66th minute, after a darting run into the area by full-back Cesar Azpilicueta gave the Liverpool defence all sort of problems as he saw his inviting ball into the box fall into the path of Diego Costa, who made no mistake to make it 2-1 with a thumping effort as Mignolet was in "no man's land" to save the shot. 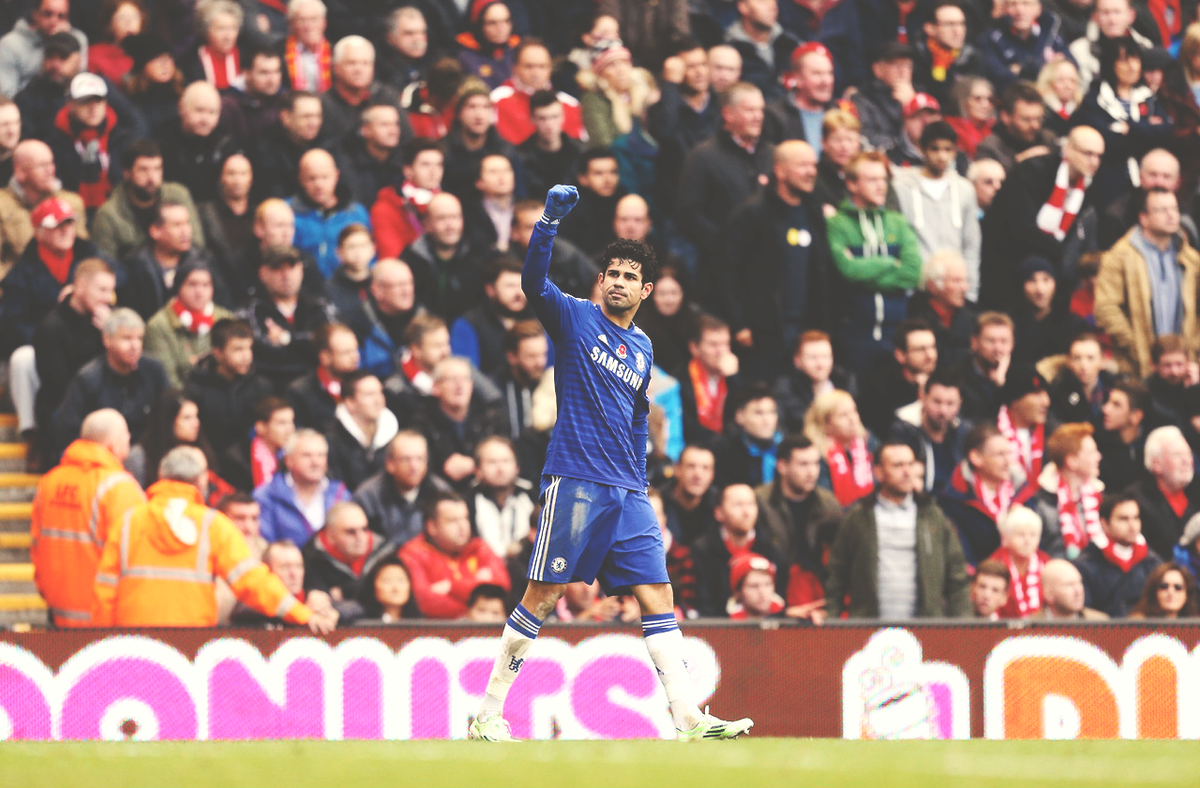 A double sub from the hosts, as Borini and Allen came on with 20 minutes to play, to replace Coutinho and Can. Arguably two of the team's best performers on the day, being subbed off as Rodgers was desperate for his side to get back into the game.

Henderson was unluckily denied, as a smashing drive towards goal was deflected out for a corner by Matic as Chelsea looked to hold on for another victory under their belt. Balotelli was replaced with just over 10 minutes to go, in a fresh legs change for experienced striker Rickie Lambert, who looked to score his first Premier League goal for The Reds.

Oscar was booked, for a blatant shove on Johnson as the game intensified with less than 10 minutes to go. Costa was also into the referee's book for a clumsy challenge with just a few minutes to go, as Liverpool looked dangerous as they upped the pressure to try and get the equaliser. Gerrard came close with a half-volley on the edge of the area, but his shot was blocked by Cahill's hand and somehow despite penalty appeals, the referee waved play on.

The replays showed it was in-fact a handball, and the hosts were rightly aggrieved at the penalty decision as it signal the end of their game. With 5 minutes to play of stoppage time, Chelsea began their typical parking the bus tactics as goalscorer Costa was subbed off by Drogba and Hazard was replaced by Felipe Luis and they looked to time waste.

And eventually, the referee blew the whistle for full-time. Liverpool will feel hard done by, but they probably should have taken their chances, as Mourinho's men did. A good performance overall, an end-to-end match in full but the hosts will feel they should have grabbed something. Unlucky?

Here is the table currently, after that result. Chelsea move even further ahead of the pack at the top of the table, 7 points ahead of Southampton who host Leicester later on this afternoon. Player ratings below. 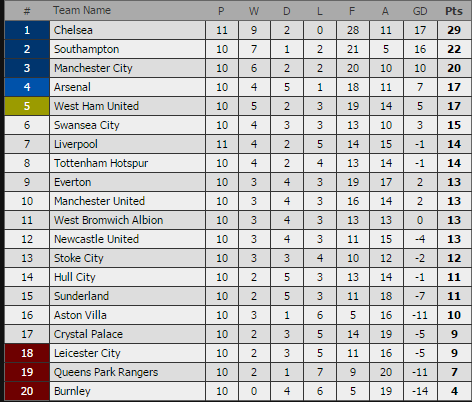 The Warm Down: Reds progress to fourth round of Carabao Cup 2 days ago

The Warmdown: Liverpool go top of the Premier League with a hard-earned win against Crystal Palace 5 days ago

The Warmdown: Liverpool open their Champions League campaign with a win against AC Milan 8 days ago

Liverpool vs AC Milan preview: How to watch, kick-off time, predicted lineups, team news, officiating and ones to watch 9 days ago

Leeds United vs Liverpool preview: How to watch, kick-off time, team news, predicted lineups and ones to watch 13 days ago

Who will Liverpool face in the group stages of the Champions League? a month ago