Liverpool and European trophies have become synonymous with each other; with the Reds lifting a total of eight titles on their travels across Europe.

Jurgen Klopp's side will be hoping to extend their tally when they meet La Liga outfit Sevilla in the final of the Europa League this Wednesday in Basel.

If they succeed in their quest of lifting the silverware, they will have secured another memorable night that has resulted from an unforgettable European journey that will remain firmly etched in Anfield folklore.

Seeing your child for the first time, gazing into its eyes and realising that nothing else matters in the world is probably the same feeling that the winners of the European Cup must have felt in 1977.

Liverpool lifted the trophy after defeating German side Borrussia Möchengladbach by three goals to one in the Stadio Olimpico Stadium in Rome, clinching their first major European Cup.

Legends were established on this day with players like Ian Callaghan, Phil Neal, Emlyn Hughes and Kevin Keegan sealing their iconic status among the fields of Anfield Road.

This first trophy was just the beginning of what was to become a prosperous time for fans of the Merseyside boys in red.

What is better than one European Cup? Two. The Reds felt the same, as they picked up their second trophy in Europe in as many seasons, sending a message to the powerhouses of football that they were a force to be reckoned with.

In front of a Wembley crowd of 92,000, the holders defeated Club Brugge thanks to a solitary goal from Kenny Daglish as they become the first English side to retain the trophy.

Bob Paisley was already an Anfield hero as he continued the legacy founded by Bill Shankly but his achievements were set to continue and his status was also about to rise.

Although Liverpool were now a team known across the land, they were never on the same level of notoriety as Spanish giants Real Madrid who at this point in 1981 were looking to secure their sixth European Cup.

Boasting a team full of stars such as Laurie Cunningham, Vincente Del Bosque and Santillana the odds of the reds leaving with a third trophy in five years looked very slim.

The power of Paisley however, once more prevailed and Liverpool, took home the silverware thanks to a single Alan Kennedy goal as the Parc De Princes in Paris was engulfed in a sea of red.

This was however to be the iconic manager's last European final but his record of three trophies with one club is yet to be equaled.

The reds 'Rome' on 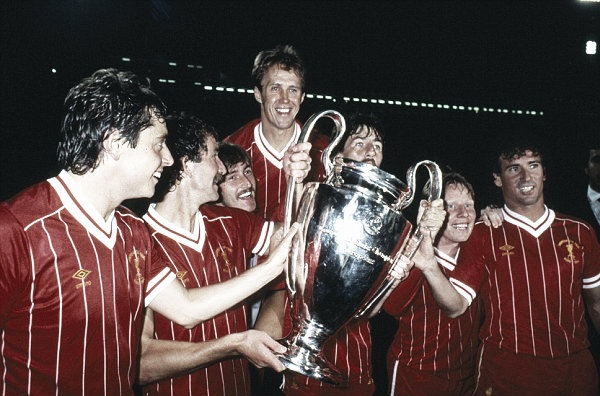 Over a period of eight years, the reds were the single most dominant team in Europe, and their final taste of success in this period came in 1984 against Roma in the Italian's own back yard, in what is widely regarded as one of the most memorable finals in history.

With the two sides level (1-1) after extra time, the final was to be decided by penalty shoot-out, where one man wobbled his way to victory.

Bruce Grobbelaar, Liverpool's goalkeeper, attempted to play on the nerves of the opposition players by wobbling his legs as if he were terrified.

It worked; although it was Kennedy's penalty that secured the win for the reds thus silencing the Italian dominated crowd, the antics of the South African shot stopper was the highlight of the night swaying the victory towards his side.

Charismatic manager Bill Shankly did not pave the path for the club's European dominance without wining some trophies along the way; he established his side in Europe four years before Paisley took the club to even greater heights but his contributions are still as important as the rest.

In 1973, the reds defeated Borrussia Mönchengladbach to cement their footing in the door of Europe as they picked up the UEFA Cup, defeating Hennes Weisweiler's men 3-2 on aggregate.

The opening leg saw Anfield witness a Merseyside mauling as the redmen ran away 3-0 winners with goals from Keegan (2) and Larry Lloyd handing the advantage to the English side.

The Bundesliga giants refused to accept defeat and almost clawed their way back into the tie in the second leg as they ran out 2-0 winners with the legendary Jupp Heynckes scoring twice but alas is was all in vain as the Reds hung on to claim the victory.

Fast forward three seasons later to 1976 and the reds were in the UEFA cup final once more, this time squaring off against Club Brugge again in a two leg stipulation.

Paisley managed to urge his side over the line in the first leg at Anfield, winning 3-2 with goals from Kennedy, Jimmy Case and Keegan securing the advantage.

The Belgian outfit were not able to overturn the deficit as all they could muster was a 1-1 draw, handing the English visitors the trophy for a second time in their history.

This win was seen as the catalyst for Liverpool, who went on to achieve great success later in their history as just one year later their domination on the grand stage would occur.

The 1990's were not a great era for fans of the redmen, with just a First Division Title and a Charity Shield their evidence of success, both occurring in 1990.

This was about to change; Gerard Houllier was now at the helm, and brought an new essence of flair and attack to Anfield so much so that they picked up a Community Shield, Worthington Cup, FA Cup and were on the brink of success in Europe with the prospect of a third UEFA Cup.

Spanish side Alaves, stood firmly in their way and despite taking a 2-0 lead with goals from Steven Gerrard and Marcus Babbel after 30 minutes, the reds failed to hold on to their lead as the fixture went on to Golden Goal.

With the score tied at 4-4 in a truly exhilarating and thrilling final, a dead ball situation presented cunning veteran Gary McAllister with an opportune moment to hand his side the victory, and thanks to a great stroke of look his looping cross deflected off the head of defender Delfí Geli and into his own net, handing the reds the trophy which capped off a silverware dominated season.

The road to Istanbul

It is next to impossible to mention Liverpool and Europe without including the greatest final in the history of the competition, as in 2005 the reds overcame a 3-0 deficit from AC Milan to take the tie to penalties.

A captain's goal from Gerrard, a speculative long-range effort from Vladimir Smicer and a rebound strike following a penalty miss from Xabi Alonso consumed the three comeback goals but Jerzy Dudek also played a huge part; denying Milan several times and eventually won the game for his teammates with a Andriy Shevchenko penalty save.

There was complete ecstasy on the faces of every Liverpool player as they had completed the unthinkable against one of the best teams in the world, and etched their contributions in the club's already iconic history.

The world had already witnessed the reds save themselves from the bring of defeat in the 2004-05 competition with that monumental Gerrard strike against Olympiakos in the group stages, saving the Merseyside club from early elimination.

After defeating Bayern Leverkusen, next the reds were tasked with defeating Serie A giants Juventus, but they managed to shrug off The Old Lady with a Luis Garcia volley the memorable strike of the occasions.

Soon came fellow English side Chelsea, where Anfield became a warzone, the fans were constantly in voice and the stadium was rocking. After a goal-less draw at Stamford Bridge in the opening leg, Jose Mourinho's side were seething when a Garcia goal was controversially awarded in the early stages.

Despite Petr Cech fouling Milan Baros which would have resulted in the goalkeeper being sent off and the reds awarded a penalty, the Portugese coach continued to protest but his rant went unheard and the reds eventually met Carlo Ancelloti's Milan side at the Attaturk Stadium in Istanbul.

The prospect of yet another European Cup is looming with the red's opponents looking to claim yet another UEFA cup as they have won the competition two seasons in a row.

Liverpool should not be intimidated in Europe as their iconic history is matched by few and with Klopp's side fully rested they will head to Switzerland with victory their only focus, in what would cap off a brilliant debut season for the eccentric German.

The Warm Down: Reds progress to fourth round of Carabao Cup 5 days ago

The Warmdown: Liverpool go top of the Premier League with a hard-earned win against Crystal Palace 8 days ago

The Warmdown: Liverpool open their Champions League campaign with a win against AC Milan 11 days ago

Liverpool vs AC Milan preview: How to watch, kick-off time, predicted lineups, team news, officiating and ones to watch 12 days ago

Leeds United vs Liverpool preview: How to watch, kick-off time, team news, predicted lineups and ones to watch 16 days ago

Who will Liverpool face in the group stages of the Champions League? a month ago