Both Manchester United and Tottenham Hotspur played their last game in this campaigns Asia Tour, with the Reds coming away 2-1 winners.

United certainly had the better of the first half, although Spurs were the stronger out of the two in the second period. 18-year-old Angel Gomes' winner carried on his side's good run of form this pre-season.

The first chance of the game came after four minutes as Daniel James intercepted a poor pass from Moussa Sissoko. The Welshman found Anthony Martial who struck the ball across the goal, only for it to hit the post.

Just before the 10-minute mark Troy Parrott found Dele Alli with space on the right-hand side of the box. His outside-of-the-boot effort was saved well by David De Gea.

United had the better start to the game and took the lead after 20 minutes. Andreas Pereira found Martial, who had made a good run behind the Spurs defence. The shot should have been a comfortable one for Paulo Gazzaniga to save but he let the ball sneak in at his near post.

Mauricio Pochettino’s side struggled to create many clear-cut opportunities in the first half, with United having a 1-0 lead.

Both sides made many changes for the second half. Five minutes into the second half, Toby Alderweireld found Son Heung-min in behind the defence with a fantastic ball. The South Korean looked to chip the keeper but he put too much on it.

Spurs equalised with 25 minutes to play after having the better of the second half. Lucas Moura took a great touch on the edge of the box to set himself up, his tame effort deflected off a United defender and rolled past the helpless Sergio Romero.

United regained their lead with 10 minutes to go. Angel Gomes played a great one-two with Juan Mata before sliding the ball across the goal into the back of the net.

Lucas came close to equalising with a header right at the end but it went just wide of the post, meaning United came away with the win. 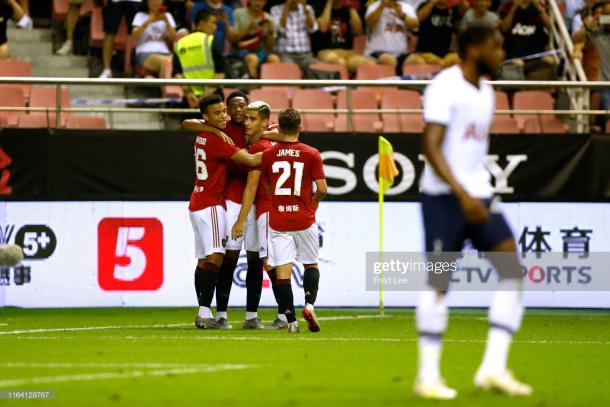 Martial was a threat to the Spurs defence for the first 45 minutes, using his pace to get in behind and created many chances, hitting the woodwork and scoring the first goal of the game from a central position.

Dan James was another stand out performer from United, using his pace down the left-hand side and cutting in on his right to create opportunities for his side, his hard work off the ball to win the ball back also didn’t go unnoticed.

Tanguy Ndombele made his first start for the North London side, adding more physicality to the Spurs midfield whilst his ability to pick out a pass helped move his side further up the pitch.

Ole Gunnar Solskjaer would have been very pleased to see his team working hard to press and win the ball back aggressively, which they have been working on throughout pre-season. This allowed them to create many chances from catching Spurs out, whilst the pace of their attacking players was dangerous all game.

Spurs struggled to create many clear cut chances in the first half, even when they were able to bring the ball forward through their midfield, they struggled to get in behind the defence whilst both Kyle Walker-Peters and Michael Georgiou failed to deliver any quality from the flanks.

Despite being just 17-years-old, Parrott showed the quality that he possesses with his hold up play and hard work to get on the ball, whilst he started to create a partnership with Harry Kane as the first half went on, although it wasn’t easy for either of them playing up front together for the first time.

Spurs played the same way in the second half, but the introduction of Son and Moura playing up front made a big difference as they had the pace to get behind which helped them considering the central formation that they used.

Eric Bailly was stretchered off early on in the second half for United with what appeared to be a knee injury, that could be a big worry for Solskjaer if it is a serious problem considering he is already looking at the possibility of adding a central defender this summer with that a weak point for his side.

Despite stating at the start of the summer that he would like a new challenge, attacking midfielder Christian Eriksen played the final 30 minutes for Spurs, with many fans now wondering whether he could be set to stay in North London with just two weeks left until transfer deadline day.

Both sides have two pre-season games left before they start their 2019/20 Premier League campaigns.

Why has Troy Parrott not been given a proper opportunity at Spurs yet?a month ago