Leicester City got off to the ideal start of theseason with an opening day win against Wolves thanks to a wonderful volley from Foxes talisman, Jamie Vardy.

A 4-0 win over Aston Villa in March 2020 was the last time a full capacity were allowed into the King Power Stadium and the Blue army were rewarded with a clever volley by Vardy from a wonderful cross from Ricardo Pereira.

Football fans around the country would of recognised Wolves for their all Portuguese alliance and would of sympathised with them when Nuno Espírito Santo decided to embark on a new challenge at Tottenham Hotspur.

However, new boss Bruno Lage still had the fire power of Raul Jimanez, Francisco Trincão and Adama Traore leading the line and it was the latter who should of gave the West-Midland side the lead.

Stand-in defender Daniel Amartey was caught in possession by Portuguese star, João Moutinho who then fed through Traore with only the keeper to beat but failed the hit the target.

Wolves were then left to rue that miss with Ricardo picking up the ball down the right-wing, expertly skipping past two players and then whipping in a dangerous ball to be expertly met by Vardy to send the home crowd wild with his 119th Premier League goal.

The 34-year-old former England striker could of had his second of the day had Harvey Barnes found him in a two-on-one situation but the academy product couldn't quite dig out the correct pass in what was his first League game back after his nasty knee injury.

Amartey's defensive display against Manchester City in the Community Shield had reassured many Foxes fans about the season ahead without Wesley Fofana.

However, following some sloppy play he was robbed fairly by Moutinho who then sent Traore through on goal with the Spaniard out-pacing and out-powering Amartey before sending his shot wide.

Amartey was also caught in possession towards the end of the first -half resulting in a Wolves Counter-attack had it not been for Luke Thomas's recovering run to block Moutinho's shot.

A problem which was spotted by Rodgers who wanted to seal up the defensive wall slightly more with the introduction of Jannick Vestergaard and Boubakary Soumaré. Both of whom were making their League debuts.

Danish international, Vestergaard was greeted by a roaring Blue army but was finding Traore hard to manage with the Spaniard outmuscling Vestergaard only to shoot too close to Schmeichel late in the second-half.

Jonny Evans, James Justin are out while Timothy Castagne is still not ready to play competitively and with Fofana out until 2022, Leicester can't really afford any more star men to be injured with a smaller squad than others as well as Europa League football ahead of them this term.

With Ryan Bertrand testing positive for Covid-19, Luke Thomas was brought in at Left-back and will arguably be one of the first on the team sheet for the trip to West Ham as we he was solid defensively and going forward with a brilliant block for Moutinho's goal-bound effort.

A sight Foxes fans didn't want to see would of been James Maddison on the deck holding his hip which kept him out for parts of last season.

Rodgers did withdraw him soon after but later stated the Coventry-born man did take a whack on his back but will be assessed. 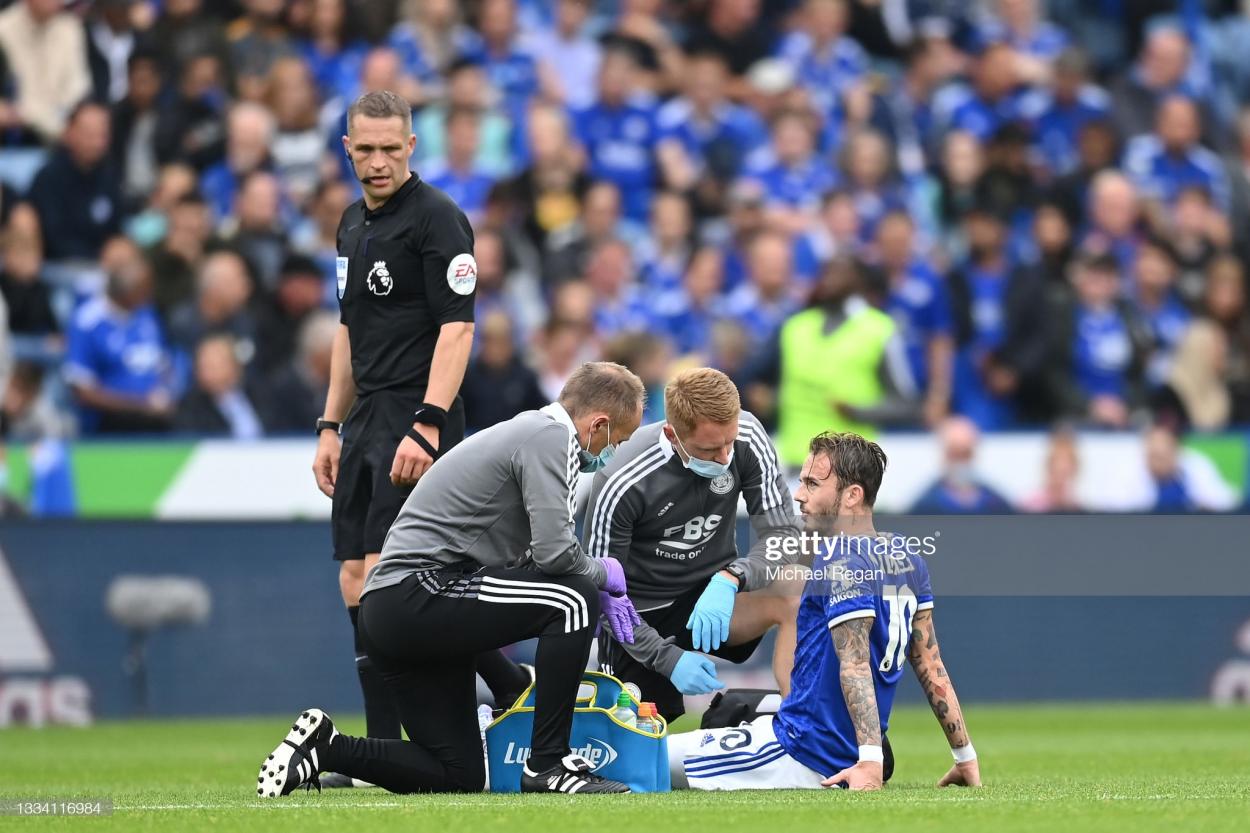 Brendan Rodgers' men travel to the London Stadium on Monday 23rd of August, to face a strong West Ham side who picked up their first three points of the season.

The Hammers dazzled in the second half as they came back from 2-1 down to win 4-2 in a thriller at St James's Park against Newcastle United.

Leicester City vs Arsenal: Predicted Line-ups a month ago

The Warmdown: Maddison winner seals three points for Foxes in West London a month ago

Brentford vs Leicester City: Predicted Line-ups a month ago

The Warmdown: Foxes back to their best in six goal thriller a month ago
//