West Ham United beat Aston Villa 4-1 at the Villa Park thanks to two impressive goals from academy duo Declan Rice and Ben Johnson as well as strikes from Jarrod Bowen and Pablo Fornals.

The win keeps the Hammers in fourth position but sees them move level on points with third-placed Manchester City, who had been knocked out of the League cup by the East Londoners just four days previous.

David Moyes made eight chances to the side that knocked the Cityzens out of the cup on penalties, with the likes of Michail Antonio, Rice, Kurt Zouma, Angelo Ogbonna, Said Benrahma and Lukasz Fabianski all coming back into Premier League action.

Only Aaron Cresswell, Tomas Soucek and Johnson kept their places in the starting eleven.

Dean Smith’s men weren’t in cup action midweek after being dumped out in the third round by Chelsea in a penalty shootout following a 1-1 draw in normal time. The former Brentford manager made four changes to the side that lost 3-1 away to Arsenal, with Leon Bailey, Jacob Ramsey, Marvelous Nakamba and Kortney Hause all making the cut.

West Ham got off to the perfect start just six minutes into the game when Declan Rice strolled through Villa’s midfield and lofted an inviting ball over to Ben Johnson who had made an overlapping run from Right Back.

The youngster pushed forward, cut in on his left foot and fired a fierce curling shot into the bottom left corner to score his second Premier League goal and to give his side the lead.

After being shocked so early on, Villa struggled to create any attacking threat at first but eventually managed to do so through Bailey in the 15th minute. The Jamaican international was found open in the box and tried to curl his effort past Fabianski but sent it straight at the keeper.

Following Villa’s chance West Ham took control of the game and while they hardly gave Villa a sniff at goal, the Hammers failed to make the most of their control and couldn’t manage to grab a second.

As a result, the Londoners were punished in the 33rd minute when Ollie Watkins popped up in space to bring Villa back into the game. The goal was made by Villa’s record signing Emi Buendia who beat Cresswell on the touchline and cut a good ball back to Watkins on the edge of the six yard box and the England international slotted home to make it 1-1.

West Ham nearly responded almost immediately through Michail Antonio who came close to restoring their lead after being played through by Benrahma down the left hand side. The 31-year-old stormed into the box and tried to find the bottom right corner but his shot was blocked by Matty Cash and it deflected just over the crossbar.

The increased pressure from West Ham paid off in the 38th minute when Benrahma played Rice into space on the edge of the box giving the 22-year-old time to pick his spot and rifle a low driven effort past Martinez into the bottom corner to restore their lead going into the break.

Moyes’ men carried their intensity into the second half and forced Villa into a mistake in the 47th minute when Konsa brought down Bowen on the edge of the box. The defender was originally shown a yellow by referee Chris Kavanagh but changed his decision to red after VAR decided it was a denial of a clear goal scoring opportunity.

Despite being reduced to 10 men, Villa came inches away from clawing level in the 56th minute following one of Cash’s long throws. The newly claimed Pole hurled a Rory Delap-like throw into the box when was headed into the path of Mcginn by Ogbonna on the right hand side of the box.

The Scottish international clipped a good cross back into a dangerous area which was met by Watkins who had found space again in the box. The former Brentford talisman sent a cracking header goalward and forced Fabianski into a brilliant fingertip save to push the ball onto the crossbar. 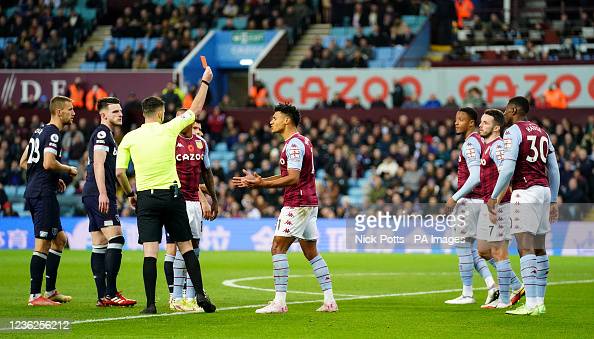 After nearly being pegged back, West Ham came close their third in the 68th minute after Rice’s low and powerful freekick forced Martinez into a good save.

The Hammers kept knocking on the door and came close again in the 70th min when Fornals chipped through ball found Bowen open in the box. The winger took his effort first time on his weaker foot but sent his strike straight at the keeper who parried the ball straight back to Bowen, whose follow up shot trickled straight into Martinez’s hands.

All the pressure from West Ham finally paid off in the 80th minute when Fornals tapped home from two yards after Martinez pushed Bowen’s low driven effort straight into the Spaniard’s path. The Spanish international couldn’t miss from there and made it 3-1 to the away side, ending any hope of a Villa revival.

The Hammers then added insult to injury four minutes later when Antonio found Manuel Lanzini free on the right hand side of the box and the Argentine passed the ball across the six yard box to Bowen for a tap in to make it 4-1 to West Ham.

Another MAGIC performance from this team ✨🤩

Five wins in a row in all competitions. We 𝗷𝘂𝘀𝘁 keep going! ✊ #AVLWHU pic.twitter.com/hxiC1rzyeP

The win sees West Ham continue their unbeaten away streak this season and piles pressure on Aston Villa and Dean Smith. Moyes will be hoping his side can continue their good away record to Genk on Thursday in the Europa League, where victory could all but ensure West Ham qualify for the knockout stages.

Exclusive: 'What a journey we've been on' - Jamie Segal on West Ham's European tour 11 days ago

The Warm Down: 10-man West Ham stand firm to hold out for a draw against Lyon 2 months ago

"The players have been monumental": Key quotes from David Moyes' post-Tottenham press conference 2 months ago

The Warm Down: West Ham United advance to the Europa League Quarter Finals on a famous European night 2 months ago

'Pick of the round': Reaction to West Ham's Europa League draw 3 months ago

The Warm Down: West Ham United held to a draw by Newcastle United 3 months ago

The Warmdown: Youthful Hammers bested by Croatian Champions 5 months ago