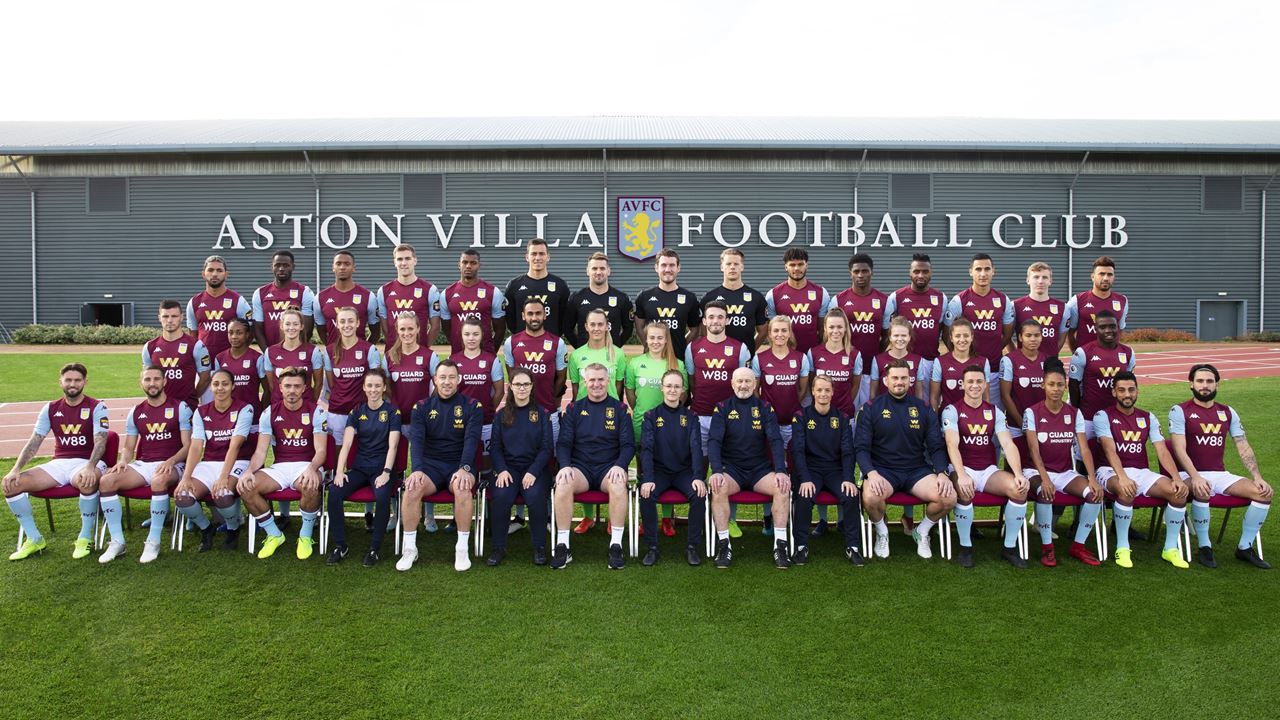 Aston Villa Football Club are a team who play their fixtures at Villa Park and have done since 1897. They currently compete in the English Premier League, the highest level of men's football in England.

Aston Villa, known as the Villans, were founded in 1874 by members of the Villa Cross Wesleyan Chapel in order to give members of a local cricket team a sport to play in the winter. Famously, the decision to form the club was made under a gas lamp. A replica of the lamp was unveiled on the 140th anniversary of the club's formation in November 2014.

The first match was played shortly after formation against Aston Brook St Mary's Rugby Club. The fixture was played with the first half being under rugby rules and the second under football rules. The club moved to their first permanent home in 1876, known as Wellington Road. Shortly afterwards, a local shop owner was made a committee member and began officiating matches. The shop owner, William McGregor would play a huge role in the future of the game later on.

In 1880, Villa won their first ever trophy. This was the Birmingham Senior Cup, beating Saltley College 3-1 in the final. Villa would come to dominate the competition up to 1912. Captaining Villa in the 1880 final was Scotsman George Ramsay, who would become manager in 1882.

Under Ramsay's stewardship, Villa became the dominant force in English football. Bringing in a large contingent of Scottish players, including legendary striker Archie Hunter from Ayr, Ramsay led the club to its first FA Cup in 1887. Beating West Bromwich Albion in the final, Villa became the first Midlands team to win the competition.

A year after the cup win, Villa chairman William McGregor wrote to eleven other clubs from the Midlands and the North to form the English Football League, the first of its kind in the world. Villa would eventually finish second in the first season of the league behind Preston North End. Villa would win the league for the first time in 1893.

Villa would have five league titles by the turn of the century, with only Sunderland and Sheffield United winning league titles in that time. In 1897, Villa won their third league title and their third FA Cup and became only the second team to complete the double after Preston in 1888. In the same year, Villa moved from Wellington Road to Aston Lower Grounds. The supporters affectionately named it Villa Park and the name has stuck to this day.

By 1920, Villa would have six league titles and six FA Cups and were renowned as England's first 'superclub'. However, George Ramsay's departure in 1926 after 44 years in charge signalled a slow decline. As early as 1931, Villa's defence was haunting them. That season they broke the record for amount of goals scored in a top flight season with 128, a record which stands to this day. However, they failed to win the league as they conceded 76 goals in the same season. Once the goals started to dry up, Villa were thrust into relegation trouble. Exactly ten years later in 1936, Villa were relegated to the second division for the first time in their history. The 1935-36 season saw Villa have yet another cataclysmic defensive record, conceding 110 goals in just 46 games.

Once football resumed after the Second World War, Villa began a slow rebuild under Alex Massie and later Eric Houghton. The latter led the club to a famous victory over Manchester United's 'Busby Babes' in the 1957 FA Cup final. However, the club has not won the competition since. Two years later in 1959, the club was relegated again but would bounce straight back under new manager Joe Mercer.

A year after promotion in 1961, Villa won the inaugural EFL Cup. The final was played over two legs and despite losing the first leg 2-0 away to Rotherham United, the Villans bounced back to win 3-2 on aggregate. However, this would not signal a turnaround in fortunes for the club.

Villa were relegated again in 1964 and went through financial hell. The entire board resigned after intense pressure from the fans in 1965, sparking further financial turmoil and the club being bought out by Pat Matthews in 1968. Significantly, Matthews appointed local tourism mogul Doug Ellis as chairman. However, it did little to save Villa from their first relegation to the third tier in 1969.

FA Cup winning captain Vic Crowe was appointed as manager in 1970 and Villa began to recover. They were eventually promoted to the second tier as champions in 1972. However, the good times would truly return with the appointment of Ron Saunders in 1974. In his first season in charge, Villa were promoted back to the top tier after over a decade away as well as winning the League Cup. This ensured that Villa would be competing in the First Division and in Europe in the 1975/76 season.

Despite early struggles in the league, Saunders delivered further success in the League Cup. In 1977, Villa beat Everton after two replays of the League Cup final with a goal from Brian Little in the last minute of extra time. However, Saunders kept his sights set on the league. He would get his reward in 1981. Despite a career-ending injury to star man Brian Little at the start of the season, Saunders led Villa to their first league title in 71 years. Famously, Villa won the league with just 14 players. This remains the record for the least amount of players used to win a league title and will likely never be broken.

Saunders had a frosty relationship with the Villa board, especially Doug Ellis. Once Ellis left in 1975, he was replaced as chairman by Ron Bendall. The new chairman left Saunders alone until 1982 where he replaced the manager's one year rolling contract with a flat six year deal without his consent. Despite Saunders' intention to retire at Villa and the club being in the quarter finals of the European Cup, the manager chose to resign. He was replaced by his assistant Tony Barton.

Within months, Barton had written himself into the history books as he delivered a 1-0 win over Bayern Munich in the European Cup final. Villa also beat Barcelona in the UEFA Super Cup and a new era of dominance seemed to be on the horizon. However, this papered over the cracks of mediocre league performances. The Villans finished 11th in 1981-82 and sixth the following season. However, Barton was sacked in 1984 following a tenth placed finish in the league.

Barton was replaced by Shrewsbury boss Graham Turner. Another tenth placed finish came in 1985, before an awful 1985-86 season saw the club survive by just three points. The former European champions were relegated again in 1987 under Billy McNeill.

Hope arrived in the form of Graham Taylor's appointment after McNeill's departure. Villa were promoted at the first time of asking before surviving by a single point in 1988/89. Villa finished second behind Liverpool in 1989/90, but Taylor quickly left to manage England.

The start of the Premier League era saw another popular appointment in Ron Atkinson. Villa again finished second after a torrid end to the season gifted Manchester United the crown. Silverware would come when Atkinson and Villa prevented United from winning the treble in 1994, beating them 3-1 in the League Cup final. After a run of six losses in a row, Atkinson was dismissed and replaced with former hero Brian Little. Another League Cup would come in 1996, but Villa haven't won any major trophies since.

John Gregory delivered mixed results as manager, including a loss in the 2000 FA Cup final to Chelsea, but Villa were quickly growing stale. Success wouldn't return until the appointment of Martin O'Neill in 2006, coinciding with Doug Ellis finally selling the club to American businessman Randy Lerner.

O'Neill delivered an 11th placed finish in 2006/07, but there were clear signs that something exciting was being built. The arrivals of John Carew, Stiliyan Petrov and Ashley Young as well as the emergence of Gabriel Agbonlahor throughout that season proved to be the backbone of a team that delivered three consecutive sixth placed finishes between 2008 and 2010. Villa were within touching distance of Champions League football in 2009 and 2010 and also lost the League Cup final to Manchester United in 2010.

O'Neill left in controversial circumstances just before the start of the 2010/11 campaign. He was replaced by Gerard Houllier, who immediately set about tearing down O'Neill's system. Main striker John Carew left, Gabriel Agbonlahor was sidelined and Ashley Young would leave at the end of the season. It would take the arrival of record signing Darren Bent in January 2011 to steer the club away from relegation and into a 9th placed finish.

Alex MacLeish and Paul Lambert delivered underwhelming results and poor football between 2012 and 2015. Tim Sherwood replaced Lambert in February 2015 and delivered survival and an FA Cup final, but it was not a sign of things to come. Sherwood was sacked in October with Villa rock bottom of the Premier League. The appointment of Remi Garde did nothing to help Villa who were sent to the second tier with just 17 points in 2016.

Randy Lerner sold the club to Chinese businessman Dr Tony Xia who appointed Roberto Di Matteo as manager, before changing his mind and sacking him 11 games into the Championship season. Steve Bruce came in and launched an unsuccessful promotion campaign in 2017/18. The following summer was one of turmoil, with the club being on the brink of bankruptcy after Xia's backers pulled out. The club was eventually saved by Wes Edens and Nasif Sawiris. Bruce was dismissed in October 2018 and replaced by Brentford boss Dean Smith. Villa finished fifth in 2018/19 following a record-breaking ten game winning run before beating Derby County in the play-off final.

Villa had a £140 million transfer splurge in the summer, but it did little to help. The Villans sat in 19th in the Premier League table before the season was postponed, having lost the League Cup final to Manchester City in March 2020.

Villa began playing at Aston Park before moving to Wellington Road in 1876. The club improved the facilities, building a famous grandstand and two pavilions. It was eventually used for FA Cup semi finals and as a venue for the England national team. Villa sold the site in 1897 due to an uneven pitch and it was incorporated into the Birmingham infrastructure. The old site has been used for housing, a pub, a car park and more.

Aston Lower Ground, better known as Villa Park has been the home of the club ever since. It has been redeveloped several times and there are plans to extend the capacity up to 51,000 by redeveloping the North Stand. A full rebuild was planned under Tony Xia's ownership, with a 60,000 capacity mooted, but this was scrapped following the club's failure to win promotion in 2018.