As transformative season-defining moments come, Josh Walker's missed one-on-one in stoppage time could end up haunting Dagenham & Redbridge as they agonisingly spurned the opportunity to capitalise upon defeat for Chesterfield by earning a priceless victory that would have taken them to within a point of the play-offs.

Put through on goal for the moment his side had been seeking all game, the striker's nerve-induced hesitation allowed visiting defender Ali Omar to produce a brilliant goalline clearance that ensured the game ended in a stalemate, following a fairly dull 90 minutes beforehand.

The Gulls also had openings in the latter stages as their hosts understandably committed more men forwards at the expense of their shape, notably when Stephen Duke-McKenna fired wide, but overall struggled to match the quality they demonstrated at the other end.

A favourable series of results for Dagenham 48 hours earlier, including their victory at Wealdstone, altered the categorisation of this game from realistically a dead rubber to one of their biggest in years.

Another three points for them here, coupled with the likely scenario of Chesterfield losing to league leaders Stockport County, would take them a single point beneath the highly-sought top seven.

However, from the outset it became evident that Torquay would not prove easy opponents as they immediately underlined their quality with a move that resulted in veteran centre forward Danny Wright nodding into the side netting from Duke-McKenna's inswinging delivery.

The home team responded immediately, as Will Wright sent a raking diagonal into the channel occupied by Mauro Vilhete, whose first touch ultimately won a corner. The resulting delivery sailed straight into the arms of Shaun McDonald, setting the tone for a game in which Dagenham would struggle to convert territory into proper chances.

Their best moment all half came when Paul McCallum beat the keeper to an incisive throughball and composed himself to intelligently pull it back across for the arriving Junior Morias, but a defender just got there first to hurriedly clear.

Looking to continue his marvellous goalscoring form, Morias constantly darted between the channels to make an option. He was released on the left just a minute later but lacked his usual precision, dispossessed as he took too heavy a touch while attempting to engineer a shooting angle inside.

After that frantic opening, the contest settled down as chances arrived at far lower regularity. Armani Little's piledriver from distance was the only moment of real note before the half-hour mark, after which the Daggers enjoyed a strong spell.

However, all it tangibly consisted of was a free-flowing move that resulted in MacDonald nipping in ahead of Vilhete, before Will Wright curled a tame free-kick into the keeper's arms and Matt Robinson whipped wildly over in the last real attack before the interval.

Both sides made quickly made alterations in personnel, with Joe Felix coming on for Torquay for the second half while Dagenham brought on Myles Weston just a couple of minutes later in an attempt to inject more power and directness to their play.

However, it failed to yield significant improvement as they continued to be let down by the final ball. The time wore on at similarly quick rate to the tension inside Victoria Road, where the home supporters knew a winner was desperately required. 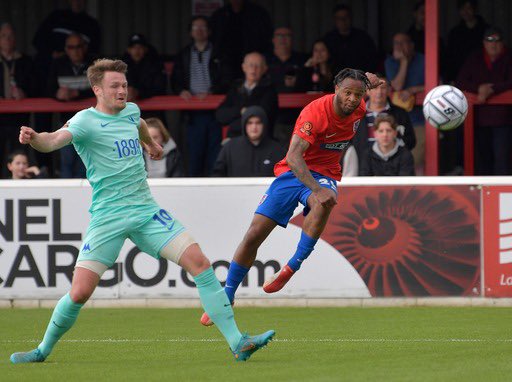 They had an enormous chance when McCallum was played through on the left side of the penalty area but, in the time it took him to shift onto his stronger foot, it had diminished and the keeper collected the resulting effort easily.

Then came two openings for Vilhete, the first spooned waywardly over the target before he embarked on a jinking run from the byline that eventually culminated in him shooting from close range albeit at a tight angle. Crossing would probably have been the better option, somewhat epitomising Dagenham's poor decision-making.

This trend continued until the latter stages, although there weren't many shots fired off by the Daggers inbetween. It was the introduction of Josh Walker that finally catalysed a late rally, especially his exceptional link-up play with McCallum.

It nearly delivered immediate reward as Walker wrapped wide from a marginal angle, but an even bigger opportunity in store with the clock reading 90+1, at which point McCallum's flick-on put his teammate through on goal.

With bated breath, the home fans waited for the net to bulge but were left infuriated as Walker stalled by twice attempting to round the keeper. When he finally succeeded, Ali Omar was on hand to clear brilliantly off the line.

Thus began a chaotic stoppage time period. Torquay bombed forwards and were themselves denied by a last-ditch clearance, with Wright preventing a back-post tap-in before Connor Lemonheigh-Evans blasted over shortly afterwards.

After his heroics, Omar could have gone from hero to zero as he appeared to handball Vilhete's effort in the last attack of the game but the referee was unmoved. In the end, both teams had to settle for a point.

Torquay's very faint play-off hopes are now officially over; barring a near-perfect final fortnight featuring two wins for themselves against promotion-contending duo Solihull Moors and Wrexham, the Daggers will ultimately experience the same fate too.

The Gulls could do them an enormous favour next weekend by beating Chesterfield at home in a game that will be broadcast live on BT Sport from half past midday. Gary Johnson's team then end with two away games, heading to Stockport County then Southend United in the last week.

Ali Omar (Torquay United) | Omar's exceptional defensive performance was an integral reason behind Torquay suppressing one of the division's most potent attacks. When the Daggers finally got in behind late on, he was on hand to single-handedly deny them with a superb last-ditch block on the line.

Biancone is a Red 2 days ago

The Spanish Women's National Team Euro Squad: The Desire for Success but a Managerial Failure 5 days ago