An incredibly chaotic afternoon at Victoria Road brought the kind of logic-defying game that only occurs once every few years but is forever immortalised into the minds of those present.

Ultimately, Dagenham & Redbridge triumphed by a crazy 7-3 margin that only begins to tell the full story. Despite being five goals ahead at half time, a semi-capitulation thrust them into genuine danger of throwing the points away until the latter stages.

The latter of those finally quashed a mini Barnet revival whereby they found the net three times at the beginning of the second half to spark legitimate belief towards a potentially historic comeback.

Victoria Road was aptly basked in sunshine for an afternoon that would prove just as scintillating on the pitch; against a backdrop of just over 2000 supporters, none of whom would have anticipated what they were going to witness.

Dagenham, though, set the tempo with a series of early opportunities. Mauro Vilhete issued the first warning signs, dancing beyond his marker Jordan Thomas countless times in the early stages, invariably drawing fouls. One such occasion led to a free-kick from which Callum Reynolds stabbed agonisingly wide at the far post.

They wouldn't have to wait too long for the opener, swiftly arriving through Junior Morias. Collecting the ball in midfield, the Jamaican frontman surged at a retreating defence and accepted the glaring invitation to shoot by arrowing brilliantly into the far corner.

Barnet's response was prompt, as they curled a free-kick into the arms of Justham before constructing another move which resulted in Ryan De Havilland going through one-on-one. His effort was brilliantly tipped away, a moment that proved retrospectively crucial.

Especially as the hosts doubled their advantage shortly afterwards with a near carbon copy of their first. Once again the Bees' defence backed off Morias, and once again they had to watch his low piledriver rifle into the very same pocket of netting.

Yet his, and Dagenham's best moment was yet to come. Just a minute later, a sensational team move encompassing several intricate, one-touch passes culminated in Paul McCallum clipping a delightful ball for Morias - who else? - to fire beautifully into the bottom right this time.

An unmarked McCallum then missed a massive headed opportunity as it seemed as if Barnet were going to reach the interval without incurring further damage. However, two goals in as many stoppage time minutes duly dispelled that possibility.

Daggers' number nine finally got on the scoresheet, calmly nodding home a brilliant centre from Myles Weston after the winger had effortlessly breezed beyond his man.

After playing provider on that occasion, Weston then opted to go alone when an enormous gap opened up in the middle of the pitch immediately after Barnet kicked off from the centre circle, and a great decision it proved too as he blasted past Jake Askew.

Thus rounded off a ludicrous half, after which Dagenham held a seemingly unassailable five-goal advantage, but even more unbelievable than that spectacle was the fact that it actually wasn't game over. 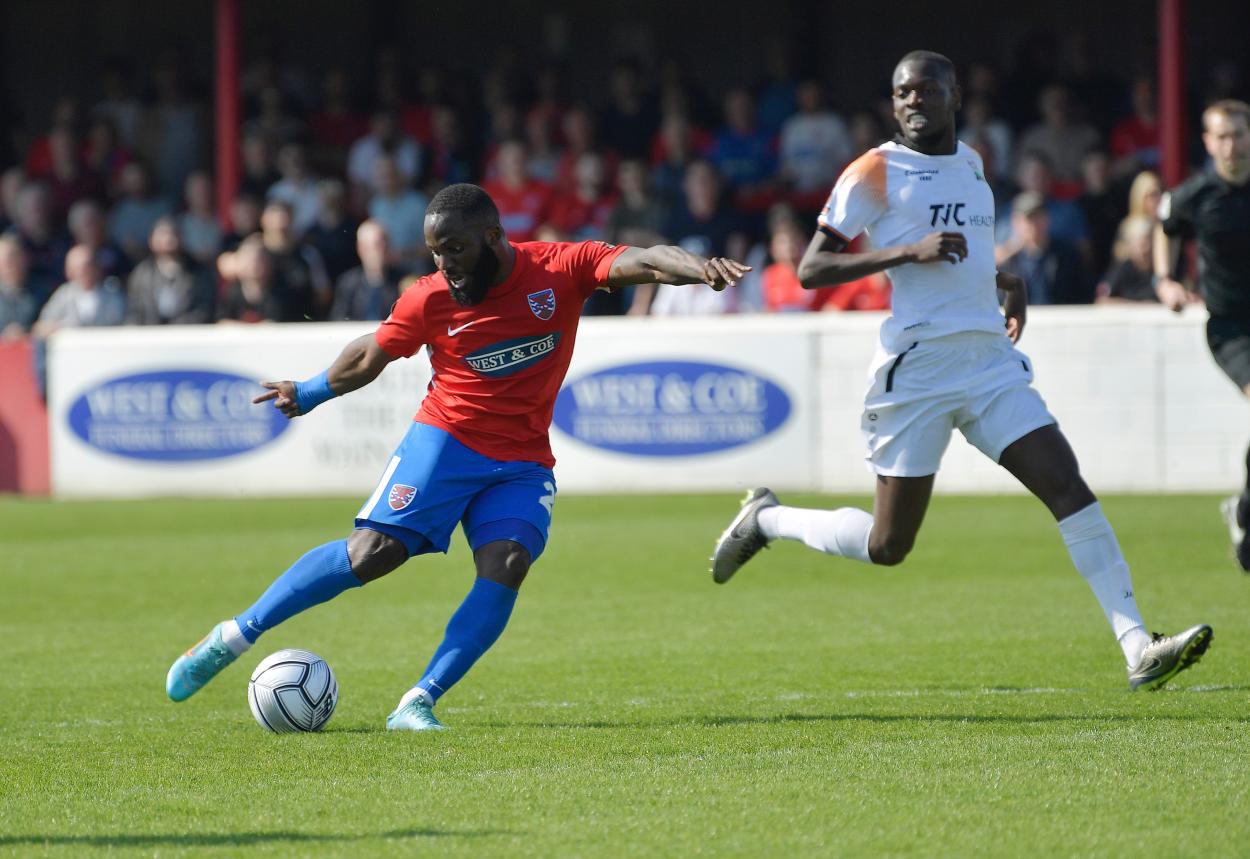 Ten minutes into the second half, it began to go downhill for the home side when they conceded a sloppy goal after being undone by a chipped pass over the top. From a Barnet perspective, it was a move of rare quality capped by Daniel Powell's superb finish.

The long-suffering away contingent began to ironically sing about winning 6-5, but as two more followed in the next ten minutes, it suddenly didn't seem as incomprehensible an outcome especially as the Daggers were now all over the place.

Powell doubled his tally almost instantly, arriving at the back post to meet Wes Fonguck's fierce cross, before further defensive ineptitude saw Callum Reynolds divert into his own net as severe panic and utter disbelief, in equal measure, gripped most of Victoria Road.

This persisted for nearly half an hour, but reached optimum levels when Fonguck bore down on goal and seemed destined to make it 5-4 but for a magnificent save from Justham. There were twenty minutes left for a now-dominant Bees to convert two more of the chances that were arriving with free-flowing regularity.

Dagenham eventually brought on fresh legs, namely Sam Ling and Josh Walker, as they sought to turn the tide back in their favour. So it proved, with Barnet's rally running out of steam partially due to them not making a substitution of their own until the 85th minute.

By then, it was too late because Dagenham had just bagged their sixth through Matt Robinson, who fired home Walker's pullback with the aid of a deflection enroute.

Back in the goalscoring rhythm, they went close again immediately afterwards as McCallum flicked against the post from Wright's free-kick, but he made amends from the very same scenario - another set-piece powered home from point-blank range this time to seal a scarcely-believable rout.

Supporters of both teams were left thoroughly drained for different reasons, but objectively it was a tremendously entertaining spectacle that epitomised the sheer unpredictability of the National League.

Grimsby Town's unlikely victory over Stockport County slightly tainted the afternoon for the Daggers, who consequently cannot gain any ground on the play-offs, yet they can only control their individual tasks and their next one arrives on Monday with a trip to Aldershot Town.

Meanwhile, as this performance demonstrated, Barnet are well and truly on the beach. They host Southend United in their second Easter game, seeking to restore pride after this disparaging afternoon in East London.

Junior Morias (Dagenham & Redbridge) | There were several impressive performers on the pitch but Morias reached a whole new level altogether, striking one of the most impressive hat-tricks across the entire division this season inside a small window spanning just twelve first half minutes. Each goal was immaculately dispatched into the far corner and Barnet defenders will be having nightmares for weeks.

"Giving their all": Eddie Howe's post-Burnley quotes 3 hours ago

'We will use disappointment as motivation for European final,' says Klopp 2 hours ago

"It stays with you": Mike Jackson's post-Newcastle quotes 4 hours ago

Crystal Palace vs Manchester United preview: How to watch, kick-off time, team news, predicted line-ups and ones to watch. a day ago

York City 2-0 Boston United: City Promoted Back To The National League a day ago
//