Grimsby Town soared into the highly-sought after play-off places at the expense of a woefully below-par Dagenham & Redbridge outfit, the deceptively tight 2-1 margin alluding to a much closer contest than actually ensued at Blundell Park.

The reality is that the vastly superior Mariners could and should have won by at least three clear goals, though that won't dilute the jubilation of their playing staff or supporters.

Jordan Maguire-Drew put them ahead on thirty minutes by capitalising upon shambolic defending from long throw and the winger then turned provider to deliver a free-kick which was scruffily diverted past Justham by a combination of Callum Reynolds and Luke Waterfall, both of whom seemed to make simultaneous contact.

Daggers' only shot on target was a consolation from the same man Reynolds in the game's final stages, which proved a minor blot on a nonetheless brilliant afternoon for the hosts as they ironically moved into the play-offs for the first time since the reverse meeting back in December.

From the first whistle Grimsby exerted a level of superiority that defied the marginal difference between the sides beforehand, although were restricted to minor half chances for the first twenty minutes.

Harry Clifton won an early corner while John McAtee saw a shot deflected into Justham's arms before then being denied just as he was poised to shoot from an intelligent cutback.

Ex-Dagger Jordan Maguire-Drew quickly established himself as the dangerman, with his silky trickery proving a problematic asset along the byline. However, he didn't have to do anything special to net the game's opening goal after being left scandalously unmarked from a recycled long throw.

Elliot Justham denied his first shot but only succeeded in setting the winger up for a straightforwardly dispatched tap-in rebound, and the afternoon would only get worse for Dagenham from that moment onwards. 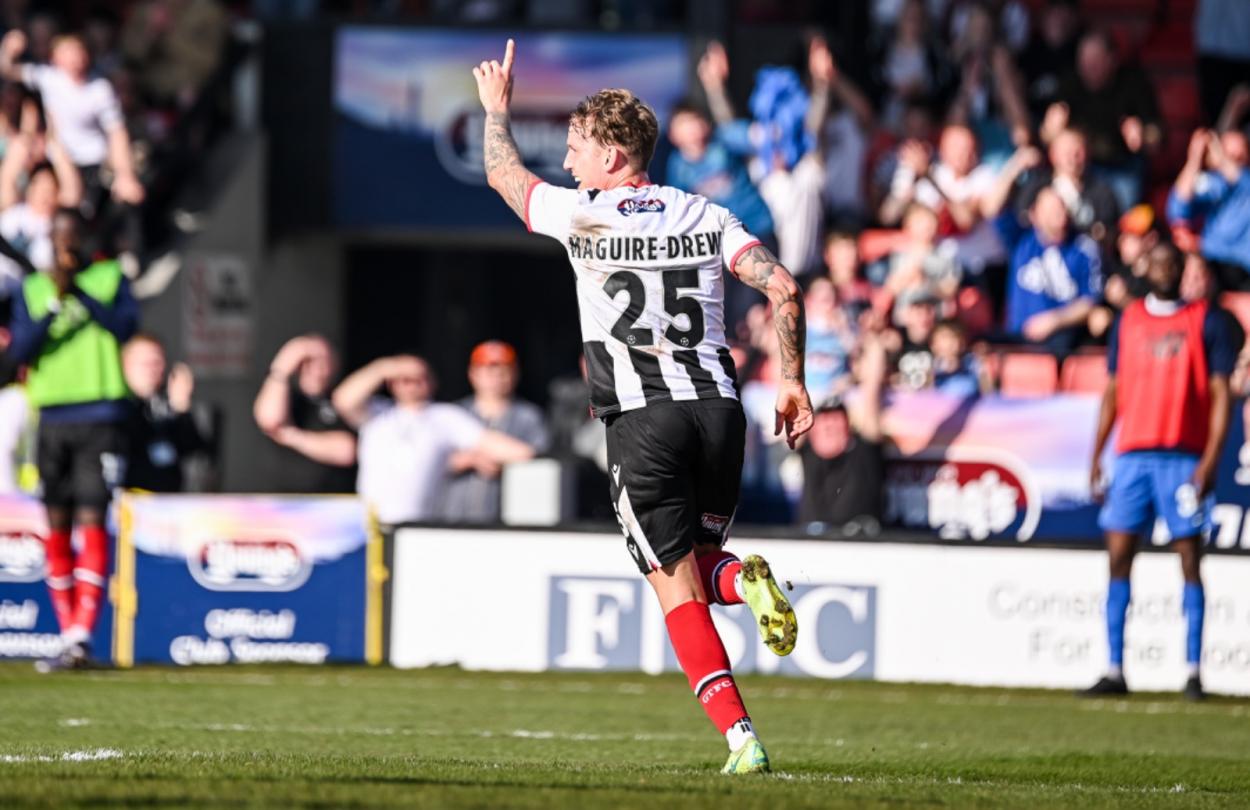 They did have a brief rally immediately after conceding, with Will Wright firing a free-kick over the bar and Myles Weston poking wide, but their hopes of finding a way back were dealt a serious blow just as the half-time whistle loomed.

A free-kick into the area proved their undoing again as Maguire-Drew delivered to the far post, where a combination of Luke Waterfall and Callum Reynolds prodded it beneath Justham, whose poor handling made him was equally culpable.

Dagenham manager Daryl McMahon's discontent was epitomised by the double substitution he made during the interval, as Ángelo Balanta replaced Brandon Comley and Weston made way for Mauro Vilhete, yet it didn't have the desired effect whatsoever as the Mariners' domination persisted.

John McAtee should have made it three after robbing possession off Elliott Johnson enroute to racing through on goal and rounding Justham, but he was denied on the line by covering defender Wright amid strong handball claims.

Around the 70 minute mark, Dagenham began to encroach into opposition territory more, particularly through Vilhete whose probing cross was parried away before he supplied Dean Rance to fire waywardly over the target from outside the area.

They did eventually find the net courtesy of Reynolds heading home a corner completely out of the blue, but to say it was too little, too late qualifies as a monumental understatement. That they couldn't even raise the intensity during stoppage time was further symbolic of their shortcomings throughout.

Dagenham's play-off hopes seem all but over; while they remain a retrievable distance away, their inability to beat teams around them has been fatal. Grimsby, meanwhile, have revived theirs and now head to Chesterfield then Weymouth in successive weekends.

Jordan Maguire-Drew (Grimsby Town) | The winger substantiated a brilliant display by registering a goal and assist against the team he once starred for as a loanee.

The Spanish Women's National Team Euro Squad: The Desire for Success but a Managerial Failure 6 days ago