Newcomers IK Uppsala shocked the current title defenders from Malmö, FC Rosengård, when they took the lead in the 6th minute.

After that, it was all about Rosengård when Serbian international Jelena Čanković equalled the scoring 24 minutes into the game. The Serbian also made it 2-1 on a free-kick four minutes later. Three minutes later, Danish international Sofie Svava took a shot from distance to make it 3-1 and not even 60 seconds later Swedish striker Anna Anvegård's header also found the net behind Emma Holmgren, Uppsala's goalkeeper. Before going into the break, Swedish striker Mimmi Larsson made it both 5-1 and then added a sixth.

The uphill climb for Uppsala continued in the second half.  Before the referee put an end to the newcomers' misery, Rosengård had scored three more goals through Anvegård, Hanna Bennison and Čanković, who got her hat-trick.

Göteborg's winning streak continues. The current table leaders are the only team that are still undefeated after nine rounds played. Göteborg collected another victory in this round when they comfortably beat Piteå 5-1 when they visited the champions from 2018 in the North of Sweden.

Pauline Hammarlund scored two goals for Göteborg, her sixth and seventh goals of the season, which means that she now tops the Damallsvenskan's top-scoring table. Other goal scorers for Göteborg were Rebecka Blomqvist and Stina Blackstenius.

Piteå reduced the deficit in stoppage time through Julia Karlernäs.

On Saturday, Djurgården hosted KIF Örebro at home in Stockholm. Both teams went into the meeting with eight points each.

After 17 minutes of play, the visitors were able to make it 1-0 through Finnish international Heidi Kollanen. The 23-year-old took a shot inside the box that ended up in the back of the net.

Kollanen's goal was also the only one scored in this game, even though Djurgården thought they should have had a penalty on two seperate occasions.

Until the 22nd minute, this game was goalless. Then Swedish striker Loreta Kullashi's show started. She made it 1-0 for the hosts, and eleven minutes later Felicia Rogic made it 2-0 - before Kullashi scored her third of the game six minutes later..

Växjö could not recover from being three down and Eskilstuna picked up all three points.

On Saturday, Vittsjö faced a heavy 3-0 loss when they visited newcomers Umeå.

That means that Vittsjö, after nine rounds now played, sit at the foot of the table with only seven points collected so far. Goalscorers for Umeå were Therese Simonsson, Emma Åberg-Zingmark and Monica Jusu Bah, with all of the goals coming in the second half.

Third-placed Linköping welcomed fourth-placed Kristianstad to the Linköping arena on Saturday.  The visitors were without three defenders in their back line, and it was not long before the first goal would come. Norweigan international Therese Åsland opened the scoring after four minutes of play.

Amanda Edgren then extended Kristianstad's lead to 2-0 before 15 minutes of the first half had been played.  Kristianstad's Mia Carlsson then had to be stretchered off after a nasty collision which saw her break her ankle.

However, the visitors then continued to press Linköping and were able to make it 3-0 in stoppage time in the first half through Icelandic Svava Rós Guðmundsdóttir.

The two teams retain their positions in the table after this round - however, the difference is now only one point. 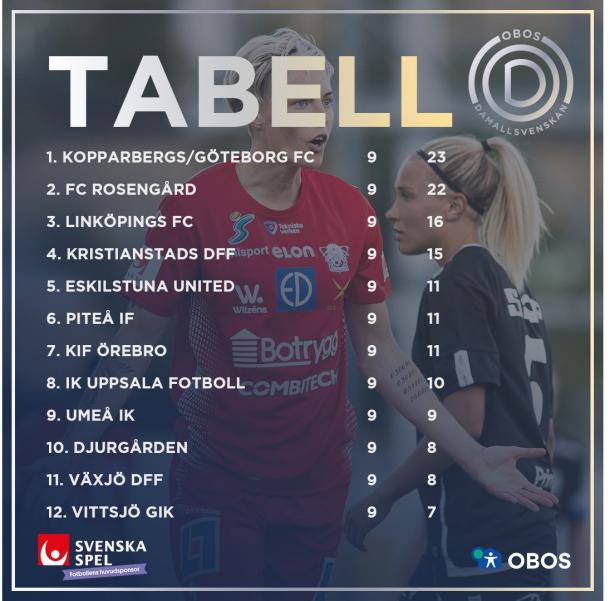