Växjö managed to get another three points in this round after defeating Djurgården 1-0. The game seemed like it would be a goalless fight, but with 15 minutes left, the hosts got a penalty. Signe Holt Andersen stepped up from the spot and secured the win against the team from Stockholm.

After sharing the points with table leaders Göteborg FC in the last round, when the two top teams played, Rosengård bounced back and won when they welcomed Piteå to Malmö IP in this round.

Rosengård players Johanna Kaneryd and Mimmi Larsson each scored within the first 20 minutes of the game. In the second half, Piteå pushed hard to get back into the game and managed to reduce the deficit through Josefin Johansson but the game ended 2-1 in favour of the hosts.

This round's biggest surprise was newcomer Uppsala's win against Eskilstuna United. After winning against Rosengård, Eskilstuna struggled to keep up their winning ways when they welcomed Uppsala to Tunavallen on Saturday.

The newcomers showed no fear and found themselves 3-0 up before halftime when Uppsala's Sara Olai, Cassandra Korhonen and Cornelia Kapocs all managed to find the net. The hosts might have felt a little consolation when United's Julia Tunturi opened the second half with a goal but after that, United didn't manage to find the energy that was needed to chase the win.

At half time, Kristianstad led the game at home against Umeå 1-0, after a goal by Amanda Edgren. However, in the second half, Umeå worked their way into the game and equalised through Elin Nilsson and the game ended 1-1. This draw meant that Kristianstad went undefeated for the sixth game in a row.

One week ago Vittsjö seemed to be a team in total crisis. In this round, they secured their second victory in a row when they visited Örebro.

After the first half, it looked like a tough task for Vittsjö to bounce back. Örebro's top scorer Karin Lundin had put the hosts a goal up just minutes before the break.

In the second half, Vittsjö put pressure on Örebro and it eventually paid off when Clara Markstedt equalised in the 74th minute and Nellie Persson then secured the win in the 90th minute.

This round's most exciting game took place at Valhalla IP in Göteborg on Monday night when the table leaders hosted third placed Linköping.

The hosts showed no mercy and the tempo and pressure was high from the beginning. The battles were hard and physical from each team and it showed the day after with bruises on more than one player in each team, a black eye for Göteborg's captain Emma Berglund who had to be subbed off in the first half and a badly sprained ankle for Linköping's Finnish international player Olga Adela Athinen who had to be carried off the pitch just before the break.

The goals from Göteborg came after Athinen's departure when former Linköping player Stina Blackstenius headed in the first and put the hosts in the lead. in the 7th minute of added time in the first half, Pauline Hammarlund added another the goalscoring when she made it 2-0.

The second half was not eventless, although goalless. With this win, Göteborg keep their 1st place in the table, one point ahead of Rosengård and four points ahead of Linköping. 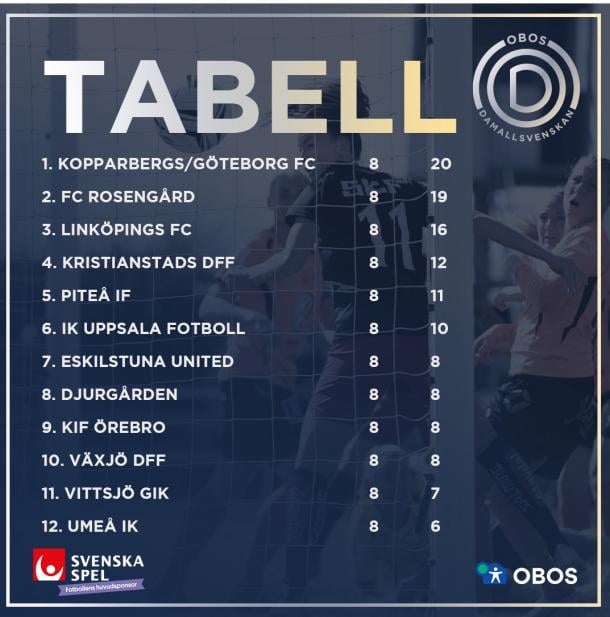