Brianne Folds is a 22-year-old midfielder from Lakeland in Florida who recently signed a two-year-contract with top Swedish side  Göteborg FC.

Brianne Folds has played for Auburn University in Alabama and was drafted by the North Carolina Courage, the team that won the NWSL in both 2018 and 2019. On top of that, the young talent has played in all the youth national teams for the US, up to the U23s. Folds had been in training with the North Carolina Courage for a week when the US shut down due to the COVID19-pandemic and when the opportunity to go to Sweden showed up she didn't hesitate to take it.

"This is a great opportunity for me. The coach and the players have all made me feel so welcome, and I'm excited to start my journey as a professional football player here in Sweden with this amazing team." Fold says.

The American seems to have used her time wisely in Sweden so far, by trying to adjust to her new home country. She has already made appearances out on the pitch for her new team, although just as a substitute. However, Folds seems to be satisfied and happy about her situation:

"I'm here to learn and to develop myself, both as a player and as a person. So far, it's been really good. It's everything I ever wanted. I'm sure this will be a great experience for me." 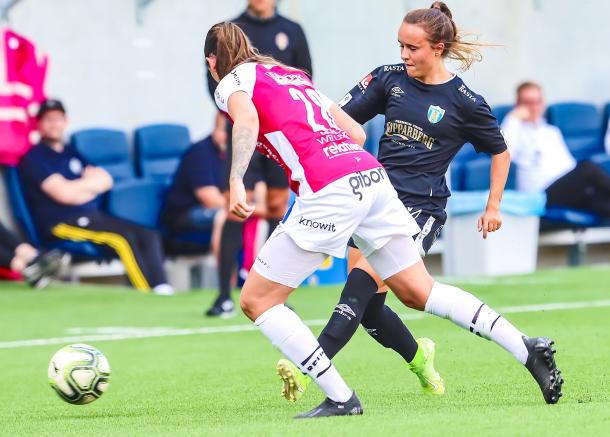 "The way of playing football here in Sweden is a little different from the US playing style. Here it's more about possession and defending, back home it's more physical and going straight for goal."

Like most players from abroad, Folds thinks that Sweden has a very competitive league that has a lot to offer a young player like herself:

"Football here in Sweden and this league is unpredictable, and you have to really show up for every game. I'm still learning, and I'm here to live my dream, which includes being a professional full-time football player. Of course, I also dream about the US national team; I'm sure that I'm not alone with having the dream that I am one day going to be called up to be a part of the best national team in the world."

During the negotiations and transfer to Göteborg FC, Folds' agent Ashley Brown likened her to Barcelona star Lionel Messi. Swedish football fans, who still aren't allowed into the Stadiums, might have something extraordinary to looking forward to when they can take place into the stands at Göteborg's Valhalla IP again:

"The fans and supporters are being missed. I can't wait to play in front of a crowd here in Göteborg." Folds finishes.