Växjö at the bottom of the table, before this round's battle with Umeå was pressured to gain points. Ahead of the second half, the situation was looking tough, when they were down 0-2 against the newcomer from the northern parts of Sweden who came to Växjö with confidence after last round's victory vs Linköpings FC. Kayla Braffet and Lova Lundin scored Umeå's goals.

Although Växjö refused to give up. Signe Holt Andersen's penalty in the 67th minute gave them hope and the strength they needed to push for an equaliser.  With just ten minutes left, it became a reality when Holt Andersen scored again.

Piteå travelled down to the Swedish south to face Kristianstad in Skåne. Piteå was eager to bounce back from their surprising loss vs Växjö in the last round.

They got the start they wanted when Brazilian player Fernanda da Silva put Piteå in the lead with a spectacular goal when she scored directly from a corner-kick.

But that was it for Piteå. Just two minutes later Kristianstad scored the equaliser through a header from Alice Nilsson. Ten minutes into the second half it was time again and just like that Piteå lost their lead when Kristianstad's Amanda Edgren hit the beck of the net behind the Norweigan goalkeeper Guro Pettersen.

Jutta Rantala then scored a delicious goal, when she with a spectacular solo number fooled every single one of Piteå's defenders before she put the ball behind Pettersen into the goal, making it 3-1.

After that, Piteå didn't recover. Piteå's Nina Jakobsson then was shown off the pitch in the 60th minute with a red card, and the win was a done deal for the hosts.

Djurgårdens IF's start of the season might have been a bit slow and worryingly much alike last season. But in this round, the Stockholm team showed strength when they just before half time took the lead vs Eskilstuna. Frida Boriero found midfielder Sheila Van den Bulk with a corner kick making it 1-0 for Djurgården.

With 20 minutes left to play, Van den Bulk was taken down roughly by the defence in Eskilstuna which resulted in a penalty for Djurgården. She stepped up to the spot herself and scored her second goal for the evening.

Eskilstuna managed to make it 2-1 in the 78th minute through Finnish international Kajsa Collin, who was assisted by another international, Swedish striker Loreta Kullashi - but it was not enough.

Djurgården got their second win of the season and thus climbs up to seventh place in the table. Eskilstuna, on the other hand, remains in sixth place having the same points as Djurgården but with a better goal difference.

Vittsjö was expected to be one of the top teams in the Damallsvenskan ahead of the season.  They have had a rough start with ACL injuries and has not managed to meet the expectations. When the team faced newcomer Uppsala on Wednesday, they had not won a single one game ahead of round 7. However, hosting Uppsala the other day they managed to take their first victory of the season.

With a hattrick from Clara Markstedt and one goal from Ebba Wieder, Vittsjö won the game with 4-2. Goalscorers for Uppsala were Nicole Odelberg-Modin and Cassandra Korhonen.

Both Linköping and Örebro came from losing their games in round 6, and it showed straight away when the referee blew her whistle for the game to start at Linköping arena on Wednesday evening.

It was a tight and physical battle from the beginning to end, with no lack of chances to score for both teams.

However, Linköping's Ronja Aronsson forced the ball into the back of the net behind Örebro's goalkeeper Moa Öhman, after an assist from Norweigan international Frida Leonhardsen Maanum just before halftime.

Örebro forced hard into the end, but the ball never reached the net behind Linköping's keeper Matilda Haglund. Linköping is still within the top three of the table, with five points ahead of Piteå who is fourth.

This round's top game was between Sweden's two current giants within women's football when Göteborg FC welcomed FC Rosengård to Valhalla IP in the centre of Sweden's second-biggest city.

Both team's starting formations were full of world-class players although it showed early in that Göteborg FC, really missed Norweigan international Vilde Boe Risa who was out due to an injury,

It was an eventful start, and the first goal chance was created after 13 minutes of play. FC Rosengård's striker Anna Anvegård got a finish towards goal after a corner, but it was cleared at the last minute.

Shortly afterwards, a fight between the coaches' out by the sideline appeared. The guests' assistant coach Patrick Winqvist received a warning from the referee, who had to run out to the sideline to calm the situation down.

Both teams had massive chances to score in the first half, but it wasn't until eight minutes into the second half the ball found the net.

A cross from Julia Roddar found Emma Koivisto in the box. The Finnish international forced the ball into the goal and Rosengård's keeper Zecira Musovic had to see the ball go past her for the third time this season. After an hour, Pauline Hammarlund was close to making it 2-0, but the striker's header went just outside the post.

In the 64th minute, FC Rosengård managed to get the equaliser. Mimmi Larsson got the ball from Jelena Cankovic and scored it behind Göteborg's keeper Jennifer Falk.

With fifteen minutes left, Göteborg's midfielder Julia Zigiotti Olme fired a distance shot that ended up becoming dangerous. But Zecira Musovic was able to fingertip the ball to the corner.

In the final minutes, the game wavered back and forth as both teams rushed to try to score a winning goal. However, the battle of the giant's ended up with them sharing the points

Göteborg continues to top the table with 17 points after seven rounds. Rosengård is second with 16 points. 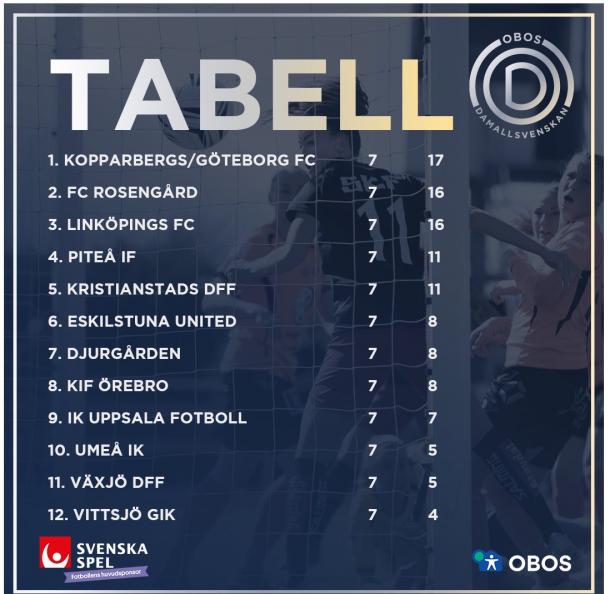