One player who led her team to a massive victory was Sweden international striker Mimmi Larsson, who put Rosengård in the lead after ten minutes of play.

Four minutes later, Linköping prevented a counterattack from the hosts only to manage a turn-over in the play giving them the opportunity to attack themselves. Nigerian international Uchenna Grace Kanu put the ball nicely beyond Zécira Músovic in Rosengård's goal. 1-1 after 14 minutes of play and the game looked like it could be an exciting battle.

But Rosengård had no intention of losing this one and made it clear from that moment. A corner kick hit by Serbian Jelena Cankovic hit Sweden international captain Caroline Seger's head and the ball went straight into the net beyond Matilda Haglund, the goalkeeper in Linköping.

The rest of the half remained goalless, although both teams created a few chances.

The second half started just like the first, a bit tentative. But when former Linköping player Mimmi Larsson found an extra gear, her former teammates didn’t manage to keep up.

In the 63rd minute, striker colleague Anna Anvegård took the ball after a sloppy pass from the Linköping defence and took a shot immediately. Although Haglund managed to save the first shot when she boxed it away, Larsson was there to take care of the ball for the second chance. Larsson wasn’t done with scoring this evening.

The hat-trick was complete barely nine minutes later when she made it 4-1 and just five minutes before the end, Larsson scored another goal; 5-1. Linköping’s defence was completely demolished in these last minutes. Denmark international Katrine Veje scored a fantastic goal for 6-1 and it wasn’t over yet. Mimmi Larsson scored her fifth goal of the game, just before the final whistle was heard at Malmö IP.

Göteborg FC remain unbeaten in this campaign of the Damallsvenskan so far. On Wednesday evening they brought home another three points to Göteborg when they won over Vittsjö away. Sweden international striker Rebecka Blomqvist and Finnish international defender Natalia Kuikka scored a goal each in the first half which keeps them in the top of the table, one point ahead of Rosengård.

Piteå did not take the opportunity to take important points when they hosted Djurgården on Wednesday evening. American midfielder Rachel Bloznalis put the guests from Stockholm in the lead after half an hour through a corner-kick.

Piteå's equaliser came after an hour of play, but the hosts did not manage to turn things around enough to win. Djurgården got a goal by Hanna Ekengren ruled out for offside. Piteå are currently in seventh place, and with this draw, Djurgården are now just above the relegation line in the table.

Kristianstad won at home against Växjö. Jutta Rantala and Therese Ivarsson's goals ensure that they now find themselves in third place with 18 points, two points ahead of fourth-placed Linköping.

After a rather dramatic afternoon ahead of newcomer Umeå IK's game at home vs Eskilstuna United, the hosts continued their climb up the table.

A couple of hours before the game it was confirmed that one player in Umeå's squad had been tested positive for COVID-19. It is the first confirmed case of the virus in the Damallsvenskan. Still, Umeå managed a 1-0 win which takes them up to the sixth place in the table.

Finally, Örebro defeated newcomer IK Uppsala at home with 2-1. A late winning goal by Frida Skogman in the 88th minute ensured that Örebro end up in the fifth place in the table. 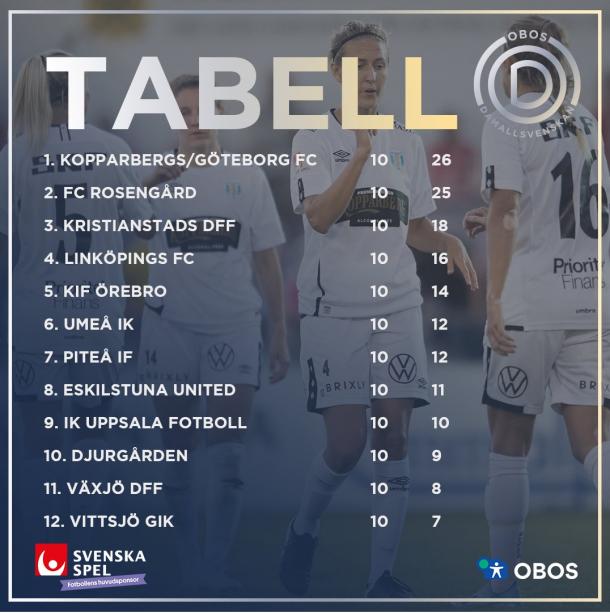