Umeå IK have had a tough start to the season in the Damallsvenskan. Before Friday's home game against top-placed Linköpings FC, the club had only taken one point from the first five rounds while Linköping sat at the top of the table with four wins and one draw so far. As this game started, it looked like it was going to continue to be difficult for the home team.

In the 4th minute, the visitors from Linköping took the lead - with a lot of help from Umeå. When Umeå defender Eva Nyström passed the ball to goalkeeper Tove Enblom, Enblom had already moved out of her net. Nyström could only stand and watch as the ball rolled into her own goal.

In the second half, Linköping increased their lead, through Nigerian international Uchenna Kanu, assisted by her fellow Nigerian teammate Ebere Orji. However, Linköping had a nightmare waiting around the corner.

In the 77th minute of the match, Umeå's Lova Lundin started a surprising turn around when she made it 1-2. Just three minutes later, Olivia Holm made 2-2, and with one minute left of regular time, Lundin completed the dramatic comeback when she scored a beautiful goal, making the score 3-2.

With the victory, Umeå climb up to 10th place in the table while Linköping falls down to 3rd.

FC Rosengård had an extremely successful start, to say the least, in round 6 vs KIF Örebro.

After just a minute, the ball was about to land in goal behind Örebro's goalkeeper Moa Öhman. Sanne Troelsgaard found her Danish compatriot Sofie Svava with a cross, but the finish landed just outside of the post.  Five minutes later, Rosengård had good chances to score from two corner kicks in a row, but they had to wait another couple of minutes before the ball landed on the right side of the goal line.

And again, it was Troelsgaard who was behind it all. The Dane, once a again with a cross, found Swedish national team striker Anna Anvegård's head, making it 1-0. By then, not even ten minutes had passed on the clock.

Seven minutes later, it was time again. Full-back Svava hit a powerful shot from 20-meters out, and the rock-hard finish slipped in right next to Moa Öhman's left post.

Another three minutes later the ball was in the net again. This time through an all-Swedish collaboration between Caroline Seger and Anna Anvegård. Seger took a free-kick just outside Örebro's penalty area, the goalkeeper saved it and Anvegård hit the rebound.

Just minutes later,  Rosengård made the scoreline even steeper. Mimmi Larsson's shot found its way into the goal - with only 25 minutes played.

After 4-0, Rosengård could afford to slow down a bit, and it would be an exaggeration to say that they invited the guests to the game again.

In the second half, it took a while before the home team found the net again.

During the first quarter of the second half, the returnee and fan favourite Ali Riley came in and entered the artificial turf at Malmö IP. After a few years in England and Germany and a quick trip to the USA, the 32-year-old had returned.

Ali Riley was not involved in the fifth goal, but once on the field she saw Emma Österlund pick up a penalty. After that, Riley, and the rest of the Rosengård players saw Jelena Cankovic make the score 5-0 with 15 minutes left to play.

Rosengård had more to come. Just seven minutes after 5-0 the sixth goal came, courtesy of a long-range shot from Hanna Bennison.

It's clean sheet once again for Rosengård and the team from Malmö seem to have woken up now to challenge Göteborg and Linköping.

Växjö are another team who have had a tough start in the Damallsvenskan. Before round 6, they had only managed one point in five matches and only scored one goal going forward, from a penalty.

On Saturday, however, they picked up a massively important win and three points versus Piteå. Jennie Nordin became a great hero when she scored the only goal of the match in the 16' minute after an assist from Nellie Karlsson. The goal was Växjö's first goal of the season from open play.

Piteå had several opportunities to equalize but did not seem to have the sharpness to do it, and the game ended 1-0 in favour of the visitors.

The victory means that Växjö leaves the bottom of the table and climb past Vittsjö. Piteå remain on eleven points after six games played.

Djurgården's performances have been a mixed bag since the start of the Damallsvenskan, but on Saturday the team would start off strong - at least to begin with.

The first goal came after twelve minutes of play—a real gem. From a free-kick far outside the penalty area, defender Fanny Lång scored a stunning goal when her shot from 40 metres out sailed below the crossbar behind Brett Maron.

2-0 came just over 20 minutes later through Camilla Huseby, and Tilde Lindwall forced a third just two minutes later. Shortly afterwards, the visitors started to recover. The first came through Mia Carlsson, and more would come. With only 20 minutes left to play, the visitors found the net again when Svava Gudmundsdottir made it 3-2.

It would get even better for Kristianstad and worse for Djurgården. 74 minutes into the match, the visitors made the score 3-3 as Amanda Edgren finished off an attack from the left with a spectacular shot.

It was a real collapse from Djurgården, which with the result takes them to 9th place at the same time as Kristianstad climb to 6th.

Göteborg now has a beautiful suite with four games in a row without having conceded a goal in the Damallsvenskan. The game between IK Uppsala and the team from Sweden's second-biggest city Göteborg at Studenternas IP ended 0–2.

With this, Göteborg now has four straight victories and finds themselves at the top of the table.

Göteborgs only goal scorer was Pauline Hammarlund who scored twice this Saturday afternoon.

They lost to 1-3 Eskilstuna United on Saturday and have not yet won a match in this year's campaign of the Damallsvenskan.

Eskilstuna bounced back with the win after the loss away against the top team Linköping. Eskilstuna now climb to 5th place in the table.

But for Vittsjö it is all downhill. The loss was the team's fourth for the season and the team's only point so far came in the 3-3 meeting with Kristianstads DFF in early July.

Vittsjö, who before the season were a tipped top team, ended up at a disadvantage after a goal by Loreta Kullashi.

They did, however, equalise through Ebba Wieder before the first half was finished.

Michelle De Jongh nutmegged an Eskilstuna defender and found Ebba Wieder in the penalty area who calmly shot the ball close to the near post.

But then the team from Vittsjö didn't have more to come up with. Vittsjö are one of the Damallsvenskan's most affected teams by the numbers of injuries concerned to anterior cruciate ligament injuries, with the latest one to get hurt being their goalkeeper Sabrina D'Angelo.

At the beginning of the second half, the home team made it 2-1 when Sonia Ngozi Okobi found the net with a long shot. Shortly afterwards, the team also forced a 3-1 goal on a corner kick through Felicia Rogic. 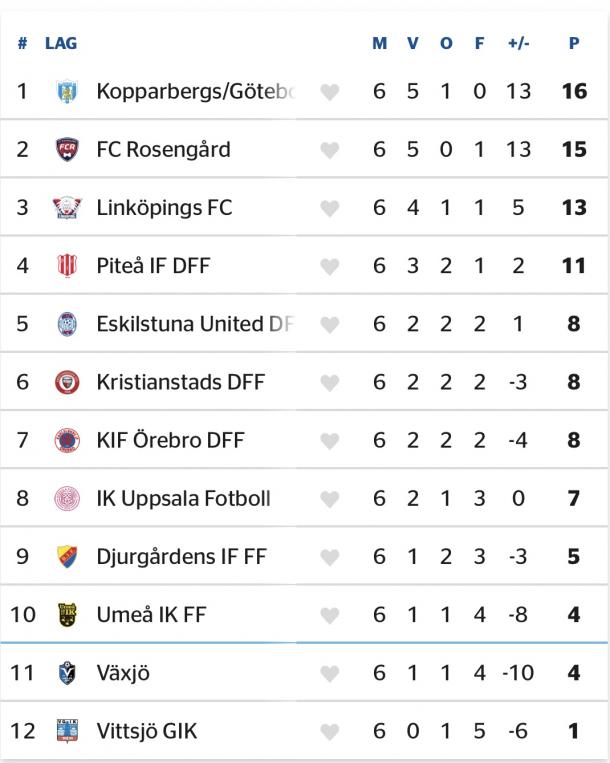