Crystal Palace booked themselves a place at Wembley Stadium for the FA Cup semi-finals on Sunday afternoon, cruising to a perfect victory against Everton at Selhurst Park.

Goals from Marc Guehi, Jean-Phillipe Mateta, Wilfried Zaha and Will Hughes secured a 4-0 victory for Patrick Vieira, playing to the backdrop of a jubilant Holmesdale End.

Everton looked off, Palace looked superb, and Wembley awaits for the red and blue of South London over Easter weekend.

Employing an attacking blueprint from the offset, with Conor Gallagher, Eberechi Eze, Michael Olise, and Wilfried Zaha in the same starting lineup for the first time, Patrick Vieira hoped to bring the game to Everton in the opening sequences.

Meanwhile, despite getting a rare victory in their last outing, Frank Lampard opted for a more cautious approach when picking his team. While Abdoulaye Doucoure sat at the base of midfield, Richarlison was the lone striker.

Dragging a shot wide in the first minute, though, it was the team in blue that could have taken an early lead. A lack of communication in the Palace half let Everton take an effort on goal, but nothing was forthcoming.

Numerous penalty calls came Everton's way afterwards. But in wanting to keep the game's immediate flow everlasting, the referee stood firm with his decisions. A Richarlison shot was blasted over moments later, and Palace survived a nervy first 10 minutes.

It took an injury sustaining tackle from Marc Guehi on former Palace man Andros Townsend to shift the momentum towards the home side's favour.

And to add to the Everton loss, Guehi would later be the scorer for Palace on the 25-minute mark from a corner.

With two attempts at swinging the ball into the Everton box, Michael Olise's second effort met the head of the recent England call-up perfectly, giving The Eagles an undeserved lead.

Patrick Vieira's team gained a foothold on the game in the second segment of the first half, and on the 32nd minute, Wilfried Zaha almost made it two for the south Londoners.

Jean-Phillipe Mateta did all the hard work in getting on the end of a loose ball by the right corner flag and his subsequent cross met the Ivorian in the box, but he was followed closely by the Everton defenders and his shot was narrowly wide.

All of a sudden, everything seemed to fall effortlessly into Palace's place. A lead was secured, momentum was firmly in their grip, and Wembley Way was beckoning.

The only thing that was missing now was a kicked corner flag. That was until the 41st minute...

Similar to Zaha's opportunity moments before, it was Mateta's chance to lift his team into a two-goal advantage before halftime. Zaha's low-driven pass into the onrushing Frenchman was finished perfectly into the right of Jordan Pickford's goal.

From a neutral point of view, the second half had high hopes of continuing at a blistering pace. This was not to be the case for the first 10 minutes.

Dominic Calvert Lewin was added to Everton's outlay, with the emphasis being placed on a two-man strike partnership. But while the Holmesdale End sang about their pending ticket to Wembley Stadium, both teams looked lackadaisical in their approaches.

A speculative shot from afar by Demarai Gray with 66 minutes on the clock looked to add more glitter to the magic of the FA Cup, but with Jack Butland already positioned to deal with the shot, the ball whistled wide of the left post anyways.

Everton would go on to carve the next chance at goal in the 70th minute. A set-piece met the head of a reaching Richarlison, but once again, there was no easy way through for the Blues.

Heading into 10 minutes left of the game, Everton remained the most likely to score in the second half, but still, there were no golden opportunities in the pipeline for the Blues, and Zaha pounced once more.

To conjure the third goal, Wilfried Zaha stepped onto a Michael Olise attempt that floated off the post and hammered The Eagles to an FA Cup semi-final.

Though pragmatic in their mentality for the second half, Patrick Vieira and Palace navigated their way through the game with success, allowing Everton very little hope of a comeback.

And to round things off, Will Hughes, a newly-found fan favourite at Selhurst Park, netted his first goal in South London red and blue. Once again, Pickford couldn't deal with the first shot from Conor Gallagher effectively, and Hughes followed up with a goal. 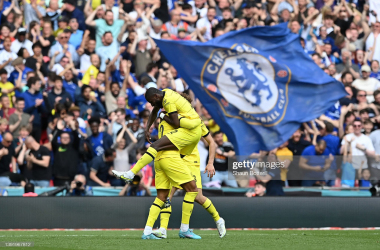 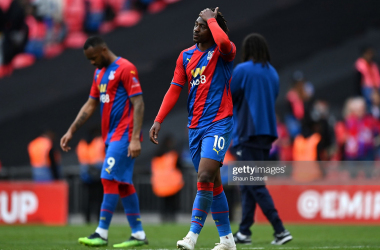