Probably the biggest game of Week 16 in the Bundesliga pitted high-flying Borussia Mönchengladbach against the stop-start inconsistency of Bayer Leverkusen at the BayArena. Both these teams came into the game in vastly differing domestic form, but with only one thing on their minds – Three points in the penultimate round of Bundesliga fixtures before the close of the Hinrunde. But nobody would have expected the 5-0 drubbing the hosts handed down to their visitors, with Stefan Kießling scoring a brace and Javier Hernandez a blistering second-half hattrick.

Both Die Fohlen and Die Werkself had been knocked out of the Champions League in midweek, but under very different circumstances. ‘Gladbach were heroic in their failure, and suggested that had Andre Schubert been in charge from the first game of the season they might have even had a shout of progressing from a very tough group. On the other hand, Leverkusen had chance after chance against a second-string Barcelona side, but failed to capitalize – Bombing out of the competition in a frustrating manner and living up to their ‘Neverkusen’ nickname.

However, both sides started the game quite cautiously, with the opening exchanges seeing Stefan Kießling wiggling his way into the box, only to run out of pitch before being able to make something of his position.

A quarter of an hour into the game, ‘Gladbach made their first significant attacking contribution to the game, with Ibrahima Traore testing Bernd Leno from outside the box. Minutes later, Karim Bellarabi attempted to play in Mexican striker Javier Hernandez, but Chicharito was caught offside. Despite this, it sent warning signals to the Fohlen defence that the in-form striker needed to be watched with eagle eyes.

Domestically, these two sides have also been like chalk and cheese, with Die Fohlen flying high on the back of an extremely impressive 3-1 win over Bayern Munich as well as a ten-game unbeaten streak, while their opponents have been disappointingly inconsistent, only finding themselves in eighth place in the standings after an uninspiring loss to the impressive Hertha Berlin. The first-ever meeting between these two teams in the prime-time Saturday evening slot definitely promised to be extremely entertaining.

Twenty minutes in, Hakan Calhanoglu was afforded an opportunity to display his free-kick prowess, but found himself unable to hit the target. ‘Gladbach seemed to be keen on limiting the space in behind the defence, sitting deeper than Leverkusen in contrast with their more pro-active approach in previous fixtures.

Josip Drmic then had an opportunity in the 26th minute to shoot against his former club, but failed to unduly trouble Werkself shot-stopper Leno in what had so far been a tentative first half of football. However, things quickly livened up on the half hour as Kießling nodded home a close-range header from a superb Roberto Hilbert cross to give the home side the lead.

After the break, the ‘Gladbach manager attempted to orchestrate just that, as Raffael and Nico Elvedi were brought on for Traore and Jantsche, who was booked in the 40th minute, to try and turn the game around. For the home side, Hilbert, who provided the assist for Kießling’s goal, was replaced by Giulio Donati.

‘Gladbach threatened to equalize just as the second half got underway, but Mahmoud Dahoud was unable to hit the target from outside the box. A minute later, the ever-dangerous Bellarabi nearly finished off a Leverkusen counter-attack to extend their advantage following a good ball from Calhanoglu.

With both sides going at it in an increasingly open game, substitute Raffael hit the post with a free-kick, making it the second set-piece to hit the woodwork for the night. Die Fohlen were getting closer and closer to finding their equalizer.The goal seemed to have lifted Leverkusen’s confidence in attack immediately, with Bellarabi soon causing the ‘Gladbach defence problems of his own, nearly scoring a quick-fire second via a deflection. 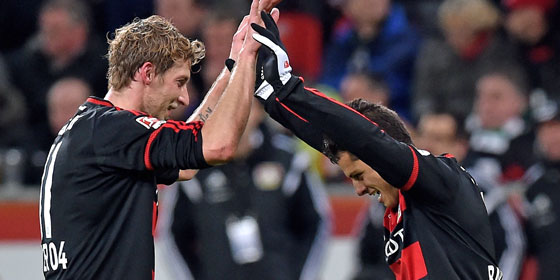 With Die Fohlen trying to get some momentum going to claw themselves back into the game, Julian Korb dragged a shot on goal wide. With five minutes left in the half, Kießling once more caused problems in the air for the ‘Gladbach defence from a corner, but could only head wide before Calhanoglu hit the post a minute later with a long-range free-kick from an acute angle.

When the half-time whistle blew, there was no doubt about which would be the happier dressing-room. Leverkusen had not allowed a seemingly jaded ‘Gladbach side to attack freely, and created a few chances with Kießling in particular adding a dimension in attack they had been missing. Could Schubert rally his troops in the second half and once more pull a rabbit out of the hat?

However, Die Werkself continued to be a threat at the other end, with Bellarabi once more causing problems with a miss from a tight angle, before Kießling, who had dominated the aerial battle throughout, sent his header wide from a Calhanoglu set-piece just before the hour mark. Soon afterwards the Turkish midfielder would look to get in on the action himself, sending a shot from outside the box wide.

This sustained spell of pressure soon reaped rewards, as Chicharito scored Leverkusen’s second with the excellent Kießling providing the assist after some superb interplay. The score soon became even more humbling for ‘Gladbach, as Kießling scored his second with another header from a pinpoint Calhanoglu ball. The lanky striker had been the difference between the two sides, and was on his way towards the Man of the Match award upon his return to the starting XI.

Leverkusen dominated from start to finish, but really came alive in an excellent second half. Heading into their next game at Ingolstadt, confidence will be extremely high with the little Bavarian club having good reason to fear the visit of Die Werkself.

‘Gladbach, on the other hand, will have a tough time recovering from this hammering, and Darmstadt will smell blood in the water for their clash next weekend.Hernandez was at it again in the 75th minute, compounding the Foals’ misery with a strike from outside the box to make it 4-0, with ‘Gladbach sinking without any trace, before ensuring an even more embarrassing scoreline with a fifth from close in before being replaced, to rapturous applause, by Admir Mehmedi with the game in the bag and having scored 15 goals in his last 12 games.

Frustration from Die Fohlen shone through as Korb saw yellow, before Marvin Schulz replaced Dahoud in the 81st minute. With three minutes remaining, Marlon Frey replaced Kevin Kampl with the game over as a contest, with Bellarabi sending another shot from outside the box narrowly wide mere moments later. The final whistle came as a welcome relief for the visitors, as Schubert’s first Bundesliga loss came as a beating that would not be quickly forgotten.

Jahn Regensburg vs Werder Bremen: How to watch, kick off time, team news, predicted lineups, and ones to watch 20 hours ago

Who will replace Marco Rose at Borussia Monchengladbach? 8 days ago