Jurgen Klopp is a miserable man

Jurgen Klopp is a superb manager and personality. His influence on English football in the last five years has been unrivalled by any manager, aside from Pep Guardiola at Manchester City. However, the charismatic German can be a rather grouchy man at times.

His comments against Burnley and Sean Dyche are nothing new. Klopp has always been tetchy when it comes to the East Lancashire outfit and it’s as though he already has a post-match script prepared before the match even starts.

Burnley have actually just gone 95 Premier League matches without receiving a rec card, a Premier League record, which shuts down Klopp’s hypothesis before it even starts. Are Burnley physical? Yes. Do they break the rules of football? Absolutely not.

Joe Cole, Jermaine Jenas and Peter Crouch were just three of the pundits that felt the need to call out Klopp for his comments. Burnley were combative and they made life difficult for Liverpool but they didn’t cross the line at all. His comments were very misguided.

The way Burnley play is difficult for Liverpool. The Reds want to physically dominate teams and they liked to utilise a lot of direct balls and crosses into the box. Dyche’s men are well drilled when it comes to winning aerial duels and physical battles; they’re arguably one of the best in the division at doing that. In an era where teams want to embrace the tika-taka philosophy, Burnley stay true to their values and this makes life tough for Klopp.

People will argue that Liverpool is just demonstrating his winning mentality but there are ways to win. Jose Mourinho has always been called out in the press for his whinging so Klopp should not be getting a free pass.

Many Burnley fans feared the worst when they saw their starting eleven. The selection of Ashley Barnes raised a few eyebrows while the injury to Ashley Westwood was a big blow.

Nonetheless, it was a courageous display from Dyche’s team. The Clarets pressed Liverpool high up the pitch and maintained a good defensive shape for the most part. They played with the ambition needed to try and get something from the match but, inevitably, the challenge was too great.

Despite sitting on zero points after two matches, Burnley have played rather well for the most part. A lifeless half an hour cost them against Brighton & Hove Albion but, at Anfield, it was simply a case of losing out to superstars.

Kostas Tsimikas came to Liverpool with a big reputation. The left-back was excellent for Olympiacos, delivering some impressive performances for the Greeks in the Europa League. Tsimikas has rarely got an opportunity to shine with Andy Robertson the main-man at Anfield. However, Robertson’s pre-season injury has given his deputy the chance to step up and the £11.75-million signing hasn’t disappointed.

Tsimikas has a burst of pace that is tough to live with. He ran that left hand side against Burnley, providing solid defensive cover whilst bombing forward to support the attack. His cross for the Diogo Jota opener was excellent. Inevitably, Robertson - who has returned to the bench - will return to the fold against Chelsea.

Dwight McNeil seems to have a thing about Anfield. He regularly steps up to the plate and it was no different on Saturday afternoon.

The wide-man terrorised Trent Alexander-Arnold in the first-half. Pace, strength and technical excellence. It helps that Alexander-Arnold is primarily focused on powering down the right because that opens up a lot of space in behind.

Burnley need to make sure they don't crush their excellent talent. Too often, he has been carrying the team's attacking creation on his shoulders.

Will Steve Bruce being in the dugout against Spurs dampen what is set to be an electric atmosphere at St James' Park? an hour ago

Steve Bruce in the spotlight - but does he deserve the negative press he gets? 2 hours ago

Manchester City vs Burnley preview: How to watch, team news, predicted line-ups and ones to watch a day ago

Watford vs Liverpool: Klopp's pre-match comments a day ago

Leicester City vs Manchester United: Predicted Line-Ups a day ago 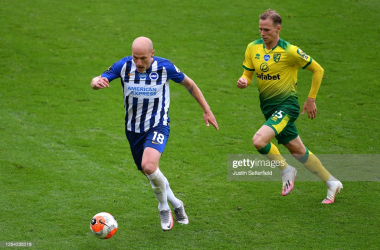 Norwich City vs Brighton & Hove Albion preview: How to watch, team news, predicted line-ups and ones to watch a day ago
//