After playing the past six years for Portland Thorns in the NWSL, two-time World Cup winner, Tobin Heath, is ready for a new challenge in the FA WSL.

Heath, alongside Christen Press, signed year long contracts with Manchester United seeing them in England until the end of the 2020/21 season and the beginning of the NWSL season - if scheduling is back to normal by then.

"It's a great opportunity to play a full season and to compete for a title. That's what I felt like I needed and it provided a really great place for that," said Heath.

"It's a young ambitious programme. I was really drawn in by Casey Stoney, her reputation and what I heard about her. And then becoming more familiar with the team, I felt like I could come here and build upon, help out, learn and grow.

"I do like putting myself in uncomfortable situations because there's a lot of growth there. As a footballer I'm never satisfied with where I'm at. I love to continue to evolve as a player and sometimes the only places you can do that is when you're uncomfortable. And when you're at home for too long it's not that."

Previous to playing for Portland since the start of the NWSL in 2013, Heath had two spells with PSG in Ligue 1. Playing overseas again was always planned for Heath, but due to the pandemic, the opportunity came sooner than expected. 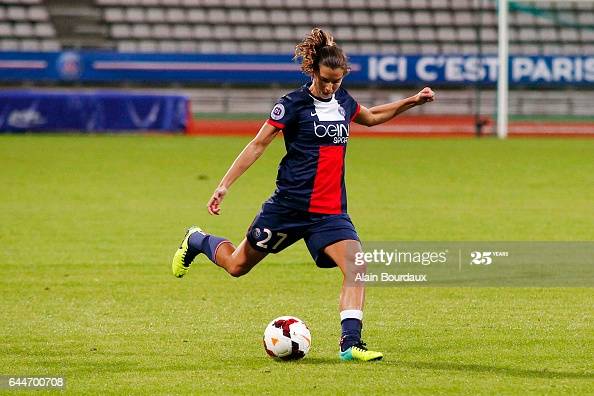 "I think we're all trying to navigate it [COVID-19] as best as possible. And this is the best move for my career and the things that I value," said Heath.

"I'm just thankful for the opportunity and extremely excited about it, because it is something that has interested me for a while and to be able to come over here and to compete is what I want to be doing right now."

"Our careers are so short and I was very patient in my waiting during our quarantine and lockdown in the US, and at some point, you don't ever know what the right decision is, but you have to make one. I chose to come over, and I'm really happy about my decision."

The NWSL regular season was replaced by the Challenge Cup this season, which Heath and Press opted out of playing, meaning that both have been out of competitve football for 6 months.

"I've played overseas before and I actually wanted to come here. Not necessarily now, the circumstances are a big reason for that, but it is a league that I've had my eye on.

"I'm a huge football fan so the league and tradition was something that had interested me. The circumstances forced a lot of decisions that I would have never thought I would have to have been making at this point in my career.

"But as soon as there was interest from the club and I learned about their programme and asked around, learned about Casey and the team, it was a project I was very much interested in.

"Then the rest is kind of history and now I'm in Manchester."

Heath is an avid follower of English football, particularly she's a big Arsenal fan. She credits the Premier League to be at the centre of her football education growing up. English and European influence made her the two time World Cup and two time gold medal Olympian that she is now. 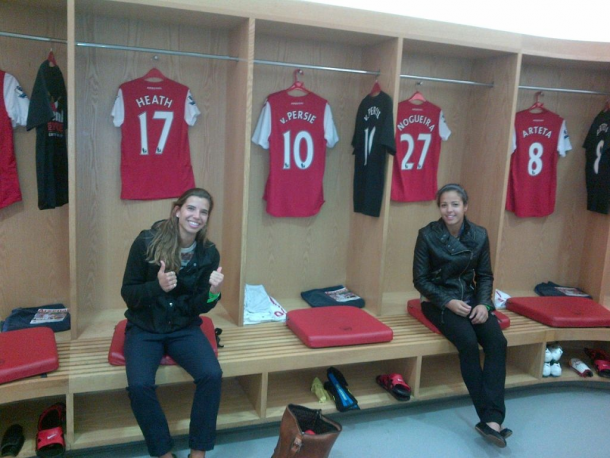 “I was actually at Old Trafford yesterday, and it was bringing back a lot of memories. And it's just such an iconic venue for any footballer.

“I was nerding out before and during the Olympics when we [Team USA] played there. I had all the feels when going back there and any footballers dream would be to play for Manchester United and to play at Old Trafford. The pitch just has like this iconic feeling about it.

“It's just special to be there and to be somewhere a part of that."

Heath has a notable passion for the sport and is often referred to as "Tobinho" because of her skillfull style of play that has been noticably influenced by Brazilian and European football.

"From a stylistic point of view, I definitely emulated more of the South American-Brazilian style. That was kind of my own stylistic taste. But from a team's perspective, I am an Arsenal fan."

"My introduction [to football], my coaches, most of them came from Europe, particularly England. So pretty much my whole footballing education and introduction was through English football.

"When I was a kid I'd have to buy -  this is dating me, but I would literally have to buy tapes of games, teams and highlights and pop them in and be able to watch to educate myself on the League and the players. That was definitely where my football education came from."

"When I put on my first Man United training kit, it felt enormous in a way that was really special. In a childhood dream type way."

This WSL season three Champions League spots are up for grabs in contrast to the two spots that have been available until now. Those top two spots of the league have been rotated between Arsenal, Manchester City and Chelsea since 2014.

Casey Stoney and her Manchester United side have been spotted as favourites to break into this top three rotation and claim a spot to represent England on the world stage.

"Having that third Champions League spot added this year is going to be crazy competitive. The top three are going to be challenged in regular season games in a way they weren’t challenged before," said Heath.

"The top teams are the top teams for a reason - incredible rosters, deep rosters of talented players that they've worked really, really hard to establish themselves. But there's no right to win anything; you have to deserve it.

"If those teams are going to win, we're going to have to force them to deserve to win. We just hope to come and make the league more competitive and for Man United to challenge for all those things. I wouldn’t come to a club that didn't have those ambitions."

Every team in the league has strengthed their squad. Mancheter rivals have added fellow USWNT players, Sam Mewis and Rose Lavelle, along with Lucy Bronze and Alex Greenwood from Lyon.

Some of the most recognised names in women's football have landed in England.

Chelsea signed Pernille Harder for a record fee in women's football. Arsenal signed Australia's and the NWSL best left-back, Steph Catley. All eyes have been on Tottenham after the arrival of UWSNT star, Alex Morgan to add to their attack. Rachel Daly is at West Ham, Valerie Gauvin at Everton, Jess Fishlock at Reading just to name a few.

The opening weekend of the WSL saw Stoney's squad take points off of champions, Chelsea, in a entertaining 1-1 draw at Leigh Sport Village.

Hope Powell's Brighton and Hove Albion held Manchester City to a 0-0 draw. That's two of the top three teams dropping points to teams outside the top. The league has reached a new level of competitiveness and Stoney said that this is the best WSL season she's seen.

“So, I think this is a very different season than maybe even last season. I think every game is going to be competitive and it's not just going to be playing against the big teams.

“We're going to have to show up for every single match in order to put ourselves in a position that we want to be, come the end of the season.

"There are a lot more things to compete for. There's the big league title, there’s the cup and also Champions League spots, which would be enormous.

"I think when I first watched the team it wasn't a team that I thought was a team that had recently come into the First Division. They are really trying to make a name for themselves.

"It shows with the the club bringing over Christen and I that they're very ambitious and they want to compete now, they don't want to wait and that's exactly what I love to do."

Casey Stoney has 130 caps with the Lionesses and has been praised to be one of the most technically gifted coaches in the league. In the first season of the existence of Manchester United women's team she won the FA Women's Champions and gained promotion.

During her first season in the WSL, she managed to finish fourth just outside the top three. She was favourite to take over the Lionesses after the departure of Phil Neville, but she remained true to her long-term project with United.

"It was incredible how highly she was spoken of. Then when I came into the team, the girls just speak really, really highly of her.

"She's a show not tell manager. She shows you exactly how she wants the team to be, the culture of the team, by her own actions. And I think that comes with a lot of respect from the dressing room.

"You can feel that she is a very strong leader on this team. She is very committed to being organised, to working hard; all the really important things to get right as a manager.

"She's very focused and the way she has mobilised this team in the last few years is really powerful. It's a testament to her and her devotion for the club and the growth of the team."

Heath along with Press have missed the first two matches of the season due to quarantine restrictions coming from the US. The pair's first WSL appearance will be on October 4th against Brighton & Hove Albion.

"I'm very excited to get to work. I've had a few training sessions now and got to know Casey's personality a bit," said Heath.

"I'm excited, anytime you get to work with a manager, I feel like you want to absorb as much as possible and learn and grow. And that's what I'm here to do.

“Personally, I hope I can grow, and learn under her but yeah, she's come with high praise.

“And same with the rest of the coaches in the WSL. It seems like there's a reputation of coaches here that are pretty ambitious, in what they want to do for their teams and the women's game.”

The Spanish Women's National Team Euro Squad: The Desire for Success but a Managerial Failure 3 days ago