21 minutes into the game, Linköping took the lead when Nigerian striker Uchenna Kanu made it 1-0 for the hosts - which also was the result when the first half was over at Linköping Arena on Sunday.

Back after the break, and 15 minutes into the second half, Kanu struck again putting Linköping in a two-goal lead. With five minutes left, Sweden international striker Lina Hurtig managed to score her first goal of the season when she made it 3-0 for Linköping.

Uppsala reduced the lead  to 1-3 in over-time, but that was it. Linköping got their three points, and the relief of being back to winning was evident.

After leaving Vfl Wolfsburg in early July due to mental health problems, Sweden international striker Madelen Janogy was ready for a comeback in Piteå IF. The 24-year-old joined her former club two weeks ago and on Sunday she played her first game since the Algarve Cup back in March.

Although Piteå lost vs Eskilstuna United, the big headline from this game was that Janogy was back to play football again.

Eskilstuna took the lead after 22 minutes when Felicia Rogic scored for the hosts. Piteå continued to fight, but in the 67th minute, the talented Sweden international Loreta Kullashi made it 2-0.

Kristianstad took the lead after 20 minutes of play when Finnish Jutta Rantala scored to put the guests a goal to the good. Örebro bounced back ten minutes later when they equalised through hard work from Emma Östlund, who stepped up and scored.

The result going into break was 1-1, but early in the second half Kristianstad was able to retake the lead. Icelandic Svava Rós Gudmundsdóttir scored the second. Örebro tried hard to get a draw, but despite high pressure, they did not manage to find another way past Kristianstad's goalkeeper Brett Maron.

Finding themselves at the bottom of the table, Vittsjö GIK travelled to Växjö on Sunday in a desperate need to pick up points.

For both teams, this was a crucial game.

Vittsjö, who have only managed two victories so far in the Damallsvenskan, started to aim on target already in the third minute. After a mistake in the Växjö defence, the Australian Emily Gielnik was able to control the ball and made a run to score her first goal of the season. Following the Aussies run, the event continued goalless until the final minutes.

In the dying embers of regular time, Vittsjö put an end to Växjö's opportunity to grab important points.

After a short struggle with a defender, Clara Markstedt managed to serve Gielniks an assist, who with a nice header scored again, making the final result 2-0.

Göteborg have so far not lost a single game in the Damallsvenskan 2020. Ahead their meeting with Umea IK,  Göteborg's track record said eight wins and two draws. After the game, Göteborgs wins were nine.

After 45 minutes, Filippa Curmark burst through the central defence and scored a real screamer from just outside the box in the heat at Valhalla IP.  Göteborg created lots of chances but only managed the one shot on target.

With 89 minutes played, Julia Zigiotti Olme assisted Stina Blackstenius with a nice performance, at which point Blackstenius rounded Umeå's goalkeeper before she rolled the ball into the net.

This round's biggest surprise came on Monday evening when Djurgården managed to get a draw in their game versus Rosengård.

Rosengård had scored 16 goals in their two recent games before they entered Stockholms Stadion to play Djurgården.

The event was both goalless and frustrating for Rosengård, who didn't manage to come through the opposition defence. The Stockholm team's defenders were extremely well-balanced and it was probably their best performance of the season so far.

In round 12, FC Rosengård will face Göteborg FC at home at Malmö IP. 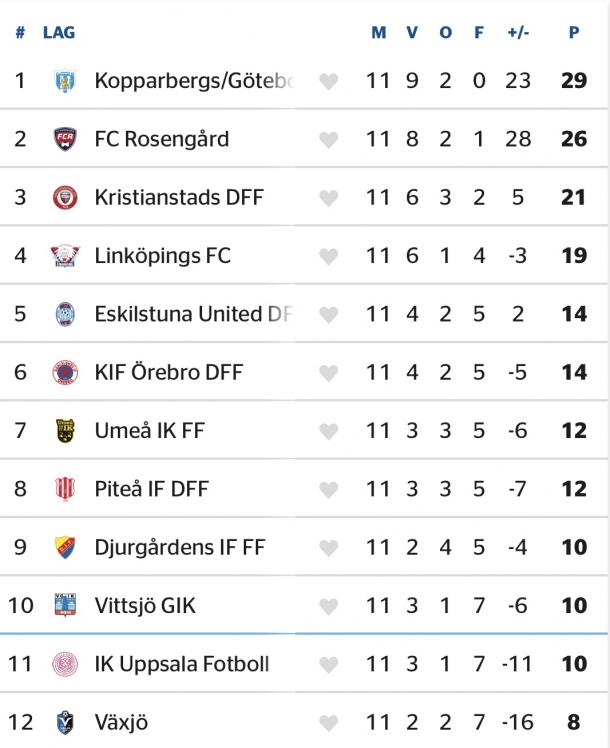