Newcomer Umeå IK were victors once again when the first game of the second half of the Damallsvenskan started on Saturday.

Therese Simonsson opened the scoring already after twelve minutes when Umeå were given a penalty. Fifteen minutes later, Lova Lundin made it 2-0.

During the second half, Piteå put a lot of pressure moving forward, but without getting pass Umeå's goalkeeper Tove Enblom. The home team had eight shots on target in the second half and Umeå just one. In the end, Astrid Larsson got a ball into the net - but it was not enough.

It started nicely off for Vittsjö, that managed to take the lead with 2-0 in the first half before Eskilstuna reduced just before the break, through Fanny Andersson. In the 84th minute, Finnish international Kaisa Collin completed Eskilstuna's comeback when she scored the equalizer to 2-2.

But Vittsjö didn't give up. After Eskilstuna's Linn Vickius received her second yellow card of the game in the 89th minute, Vittsjö joined forces with one more player on the pitch, and only a minute after Vickius departure they scored.

After a long free-kick reached into Eskilstuna's box, Australian Emily Gielnik appeared and became the hero of the day, when she forced the ball into the net, making it 3-2 for the visitors.

Strengthened from their effort to manage a draw in round 11 against FC Rosengård, Djurgården seemed to have gained their confidence back.

On Sunday they visited Kristianstad and won fairly with1-0 through a goal scored by team captain Olivia Scough.

KIF Örebro went back home on Sunday after a victory visiting IK Uppsala.

Nicole Odelberg Modin netted for the home team, while Karin Lundin scored both goals for the visitors.

Sweden international Lina Hurtig scored this game's only goal through a header in the first half before she, unfortunately, had to be subbed off ahead of the second due to injury.

Linköping continues to be bothered with injuries and another loss just fifteen minutes into the first half newly signed Japan international Yuka Momiki, had to go off with a foot injury.

Växjö put pressure on Linköping's defence in the second half but were never really close to threatening Cajsa Andersson, goalkeeper in Linköping.

It's been tight in the top between Göteborg FC and FC Rosengård since the season started back in June. Ahead of Sunday's top clash between Swedish women's footballs two giants, Göteborg had the lead in the table with 29 points vs Rosengård's 26.

When the final whistle went off at Malmö IP, these two teams had switched places in the table, after a convincing win for Rosengård with 3-0. The only thing that differs the two teams from each other at the moment is goal difference.

Although it was Göteborg that started the game with high pressure and several chances to score they had to see New Zealand captain Ali Riley score the first for Rosengård followed by 2-0 from Jessica Samuelsson and then 3-0 in the second half through striker Anna Anvegård.

With 29 points each for the two favourites, it looks like there's going to be an exciting second half of the Swedish league. 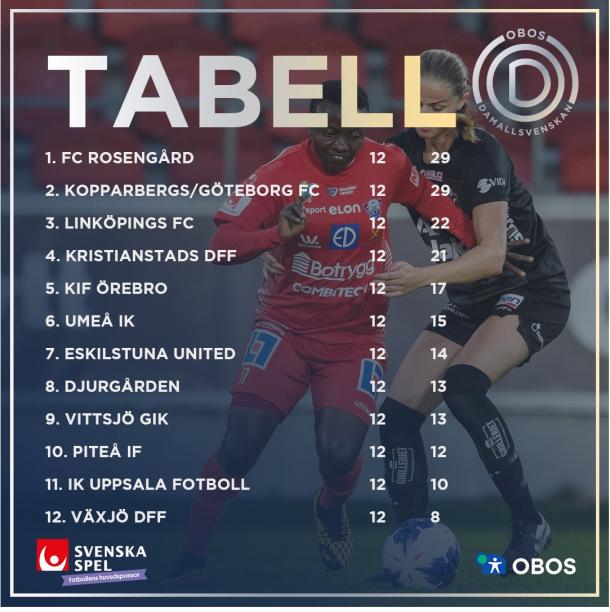 "We Rise with More Eyes" - The Football Revolution 8 months ago