Harvey Elliott has returned to first-team training and fans have huge expectations that he will pick up where he left off upon his return.

Many supporters have been unhappy with the performances of Jordan Henderson and James Milner in recent weeks and this means some are placing a huge responsibility on the 18 year-old's shoulders.

Why such high hopes for Harvey?

Before his season was cruelly derailed by a horrific fracture dislocation to his left ankle, he started three of the first four Premier League games, against Burnley, Chelsea and Leeds.

After his stellar performance against the reigning European champions, former Manchester United captain Gary Neville labelled Elliott as 'brilliant', praising the 'urgency' and 'impetus' that he brought to the Reds midfield.

Neville’s colleague and ex-Liverpool skipper Jamie Redknapp said that it looks like the youngster has been playing at the highest level for years and declared on Sky Sports that "he can go right to the top and play for his country no two ways about it."

He impressed Jurgen Klopp after being given a chance in pre-season, and seized his opportunity to cement a place in the starting XI.

That loan spell was certainly impressive, only Emi Buendia and Michael Olise had more assists than his eleven, and he had more goal contributions than both Mason Mount and Jack Grealish's best seasons in the second tier.

However, there was no guarantee that form would translate to Premier League level.

His quick transition to the highest level was even more surprising given Klopp's decision to convert the winger to a centre-midfielder but the underlying numbers support his judgement.

It must be said that there is a slight caveat, the small sample size (Elliott has played just 2.8 90s), but his stats are incredible.

For starters, he is one the Reds most progressive players, transitioning the ball from midfield to attack with ease.

Only Thiago Alcantara and Trent Alexander-Arnold better his progressive passes p90 (9.29), this is defined by Fbref as the amount of passes that move the ball forward 10 yards or more in the last six passes.

Also, of Liverpool players to play more than one Premier League game, he has the most progressive carries p90 (8.93), those are carries that move the ball at least five yards closer to the opposition goal or into the penalty area.

He drives the team forward and he is just as composed when he gets further up the pitch, this is emphasised by the fact that he ranks third for shot-creating actions p90(5.40), once again behind just Thiago and Alexander-Arnold and second for carries into the final third of the pitch p90(3.57).

Pro-active defensively too, the winger-turned-midfielder ranks first for pressures in the defensive third of the pitch p90 amongst players who have played more than one PL match (6.07), first in the squad for blocks p90(2.50) and over ten ball recoveries p90 (10.7).

Klopp's decision to transform the talent into an all-phase midfielder seemed to be paying dividends before the injury and the German will hope he can slot in and fix the club's midfield woes.

Elliott was destined to play a huge part in Liverpool's season before his injury, and the most exciting aspect was the dynamic relationship that he formed with Alexander-Arnold and Mohamed Salah on the right-hand side.

The three seemed to have an almost telepathic understanding at the start of the season. Speaking to Sky Sports after the game against Chelsea, Klopp said that "the triangle on the right-hand side worked pretty well. That’s important for us, the understanding between Mo, Trent and Harvey is really good."

Elliott's natural inclination to stay wide allows Alexander-Arnold to move into central areas to penetrate opposition defences and release Salah and Sadio Mané. An example is Liverpool's second goal against Burnley. Virgil Van Dijk's searching long ball is chested down by Elliott, who takes a touch and lays it in into Alexander-Arnold who then tees up Mané to score. 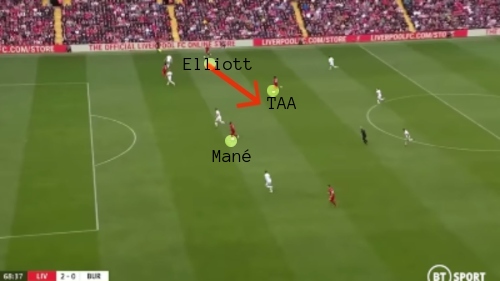 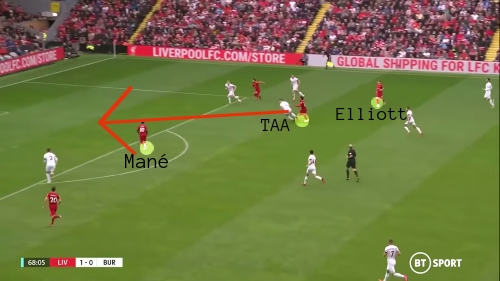 Another example is Salah's goal against Leeds, Elliott starts central but once he recognises Joel Matip is advancing with the ball, he moves to the right to cover for Alexander-Arnold who squares for the Egyptian to score. 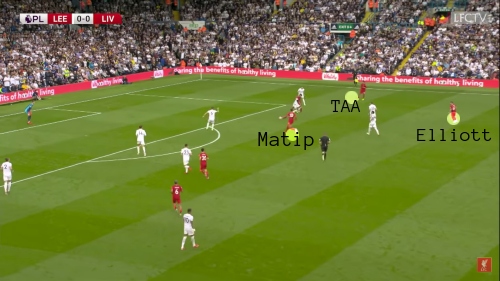 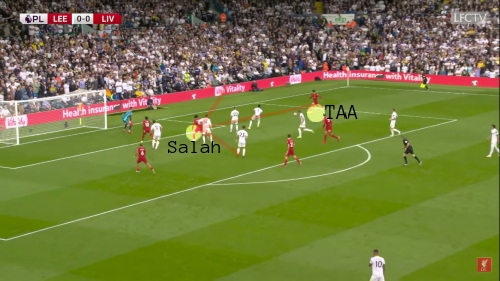 Fans and manager alike will be hoping that the dynamic between the three continues upon Elliott's return, if it resumes immediately, it is a very exciting proposition and just in time for the business end of the season.

How long until he is back?

Liverpool's assistant manager Pepjin Lijnders urged fans that his return to action will not be rushed, he told reporters before the Carabao Cup semi-final second leg against Arsenal that "he needs time and we go step by step, of course."

Klopp's number two teased fans, saying "let me say it like this, he didn't lose his football brain!" He added that "it would be a crime if you would not play him if he trains like this, but we know it's just the start of his start with the team training."

Harvey Elliott's return provides the Reds with a solution to their creativity issues and well as their defensive vulnerabilities. Judging from what we have seen so far, the weight of expectation upon his return won’t phase the boyhood Reds fan; and his performances at the start of the season certainly won't serve to dampen the hype.

Sadio Mane expected to leave Liverpool this summer a month ago

Liverpool vs Real Madrid: The Warmdown 25 days ago

Jurgen Klopp backs Sadio Mane to shine next season, even if his future is away from Anfield a month ago

Chelsea 0-0 Liverpool (5-6 on pens): Reds break Chelsea hearts once again a month ago