An outstanding, glory filled seventeen years for “Basti” comes to an end as he completed his move to Premier League giants Manchester United. He spent his early years playing primarily as a wide player before converting to central midfield.

Bastian Schweinsteiger first signed for Bayern Munich’s youth team just a month before his fourteenth birthday, tasting glory for the first time in 2002 winning the Youth Championship, it was that same year in 2002, where he made his debut for the Bavarian’s under Ottmar Hitzfeld aged 18, in his now unusual position of left back, he came on as a late substitute in the Champions League, grabbing an assist within minutes creating a goal for Markus Feulner.

A month later, he signed a professional contract at the Olympiastadion, he went on to feature fourteen times for Bayern that season helping them to a double winning the Bundesliga and DFB Pokal.

The next season, he went on to play nearly double the games he played during his debut season, in September 2003, Schweinsteiger opened his scoring account for Bayern Munich (pictured below), equalising, at that time, but his goal came to no avail as Bayern went on to lose 3-2 to the Wolves as Klimowicz scored an 89th minute winner.

Basti, as he known across Germany as, only managed to add three further goals to that tally in that season. He was dealt a boost in the Summer of 2004, after a disappointing U21 European Championships, the Bayern midfielder was called up to the Germany Euro 2004 squad, despite Germany’s disappointing run in the tournament, finishing third in Group D.

Schweinsteiger got heavy praise from many countries, in Germany’s do or die match against Czech Republic, he set up Michael Ballack’s opener, Rudi Völler’s side bowed out at the first hurdle and later resigned, he was later replaced by Jürgen Klinsmann. 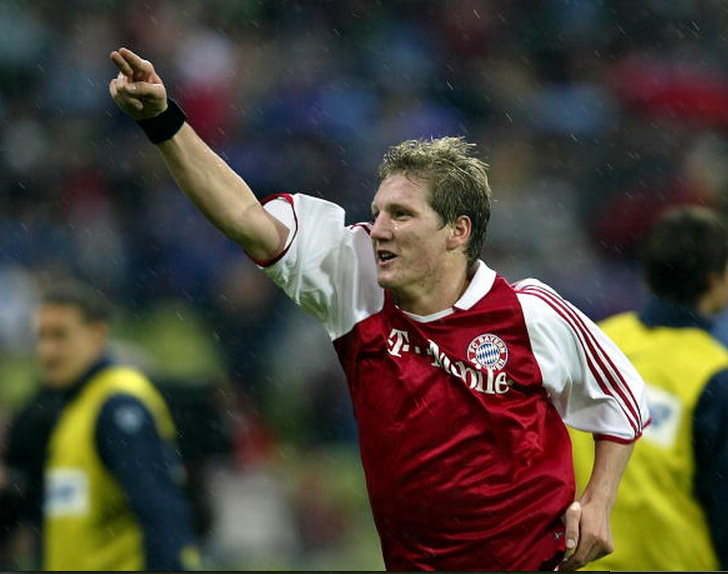 It took till 2005 for Schweinsteiger to open his account for his national team, his first two coming against Russia in a 2-2 friendly draw, but then his first competitive goals for Germany came in the Confederations Cup just days later in their 3-0 win over Tunisia. Germany went on to top their group but they fell to a Brazilian master class after an Adriano brace fourteen minutes from time broke the German fans hearts as they lost 2-3.

It wasn’t all doom and gloom for Germany in the Confederations Cup as they faced Mexico in the Third place play-off, Schweinsteiger was among the scorers as they beat the Mexicans 4-3 after extra time.

However, after Schweinsteiger’s brilliant showing in the summer, then Bayern Manager Felix Magath summoned the midfielder to play in the Bayern Reserve Squad, soon Magath realised his failures and quickly put the two time Bundesliga and DFB Pokal winner, in time for the 2006 World Cup in Schweinsteiger home nation. In the 05-06 season he made thirty appearances for the first time since signing a professional contract, he scored just three goals. In the end, he helped Bayern to their twentieth Bundesliga crown and his third in just over five years as a die Roten player.

He was drafted into the World Cup squad on home soil and he joined the squad with heaps of confidence, following his club’s success that previous season. Germany topped the group, flying into the next stage of the World Cup after beating Costa Rica 4-2, their old rivals Poland 1-0 and Ecuador 3-0, Schweinsteiger starting every game of their group stage but failed to get on the scoresheet.

They then progressed from the Round of 16 as a Podolski double saw Germany efficiently ease past the Swedes, their Quarter Final game was a little closer possibly too close for comfort as a late Miroslav Klose goal cancelled out Roberto Ayala’s first half opener. Germany went on to win 4-2 on penalties in front of a sold out Olympiastadion.

Jürgen Klinsmann’s dream of winning a World Cup on home soil often was in tatters as Germany fell to two late extra time goals from Fabian Grosso and Alessandro Del Piero saw the eventual winners Italy progress to the coveted World Cup final and saw the German’s slump into a third place play off.

The third place play-off is where Schweinsteiger made a name for himself, a possible hat trick only to be ruled against him as free kick on the hour mark was deflected and was deemed and own-goal by Petit. Germany won 3-1 thanks to Schweinsteiger's wisdom.

Schweinsteiger made over a century of appearances up until 2007-08, where Bayern, this time, completed a treble, winning the DFB-Ligapokal, the DFB Pokal and the big prize of the Bundesliga. In Euro 2008, Schweinsteiger didn’t get his usual starring role and was replaced at left midfield by Lukas Podolski, "Schweini" only featured twice in the group stage.

His European Championship campaign soon turned from bad to worse as he was sent off against Croatia for violent conduct after Jerko Leko’s tackle, Germany fell to a shock 2-1 defeat. He returned immediately after his suspension and was played a major part in Germany’s 3-2 win over Portugal and in their 3-2 win over Turkey in the semi-final being involved with all the goals, scoring one and assisting Klose before assisting Lahm in stoppage time.

However, the Germans were heart broken again, this time in the final, a Fernando Torres first half goal was enough to see off the Germans as the silverware slipped through the grasp of their fingers.

Two years later, he was awarded a six-year contract until 2016. Schweinsteiger and many Bayern Munich fans were broken again, as their previous feeling of elation soon became devastation as Bayern were beaten in the Champions League by Inter Milan. But the heartbreak continued for Schweinsteiger as the World Cup in South Africa was also on his agenda.

Despite the failures, Schweinsteiger got plenty of admirable praise and played a pivotal experienced role within a young German squad some of whom included were Mesut Özil, Thomas Müller and Manuel Neuer.

Once again the Spaniards were the conquerors this time in the Semi Finals, again there was just a single goal in it, Carlos Puyol’s goal thirteen minutes from time sent Vicente del Bosque’s side to the final in the Soccer City stadium.

Schweinsteiger captained Germany as they faced off against Uruguay, it was 2-2 following goals from Müller and Jansen before Sami Khedira ensured another third placed finish for the Germans just eight minutes from time. 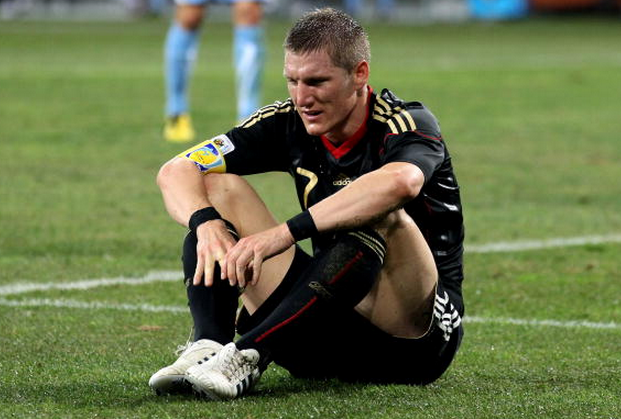 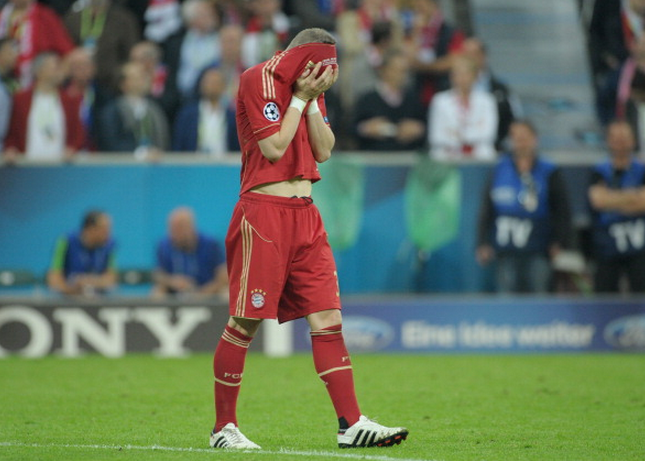 Arguably, the 2012-13 season was the best season for the 6ft German. After the previous year of torrid results and heartache, Schweinsteiger and Bayern returned with a bang.

Firstly, his goal against Eintracht Frankfurt sealed one piece of silverware out of the treble, the Bundesliga rather comfortably at that, they went on to then beat VfB Stuttgart in the DFB Pokal 3-2 after the Bavarians were leading 3-0.

Martin Harnik’s double within nine minutes of eachother caused some cause for concern for Jupp Heynckes and his side but they saw it out to complete their second piece of silverware for the 2012-13 season.

The most prestigious of the three came on a hot May day in London as Der Klassiker became the first all German Champions League final and Bayern scraped through, just.

Croatian Mario Mandzukic opened the scoring before Ilkay Gündogan equalised from the spot but just a minute from time Arjen Robben slipped past the tight Dortmund defence and tapped past Roman Weidenfeller and the ball trickled Bayern Munich to Champions League glory for the fifth time. 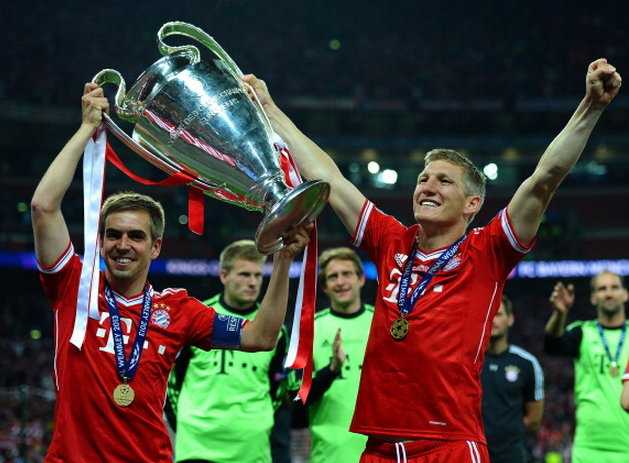 2013-14 season for Schweinsteiger was a success filled season for the German, in more ways than one. He firstly celebrated the UEFA Super Cup beating 2011-12 Champions League winners Chelsea in a nearly identical fashion as to how Chelsea beat the Bavarians at the Allianz.

Their long run of success continued following Jupp Heynckes’ departure under Pep Guardiola as they comfortably won the Bundesliga in mid-April thanks to a twenty-game unbeaten run before beating fierce rivals Borussia Dortmund 2-0 in the DFB Pokal thanks to goals from Arjen Robben and Thomas Müller in extra-time stoppage time.

The 2013-14 season was rounded off on an all time high not only for Bastian Schweinsteiger but for the whole of Germany. Germany went on to win the 2014 World Cup, Schweinsteiger played an instrumental role in the winning of Germany’s fourth World Cup.

Germany overcame United States, Portugal and Ghana on their way to the knockout stages, it then took them 120 minutes to beat African side Algeria, goals from Andre Schürrle and Mesut Özil were enough to send them to the quarter-finals.

On their way to the quarters, Germany saw off France thanks to a first half Mats Hummels, Germany broke the record of reaching the Semi Finals four consecutive times following this result. En-route to the final, Germany faced hosts Brazil.

The result that followed could not of been expected as Germany outplayed the hosts, shocking the world, a disastrous 7-1 loss for the hosts meant that Bastian Schweinsteiger and his team mates marched on to the final in Rio de Janeiro.

Germany won the game against Argentina thanks to Schweinsteiger’s Bayern teammate Mario Götze after extra time, but it wasn’t Götze who grabbed all the headlines, Schweinsteiger grabbed headlines for the work rate he put into the game, getting a gash below the eye for his troubles, but also got praise for taming the magical Lionel Messi who failed to make an impact in the most important game of his career. 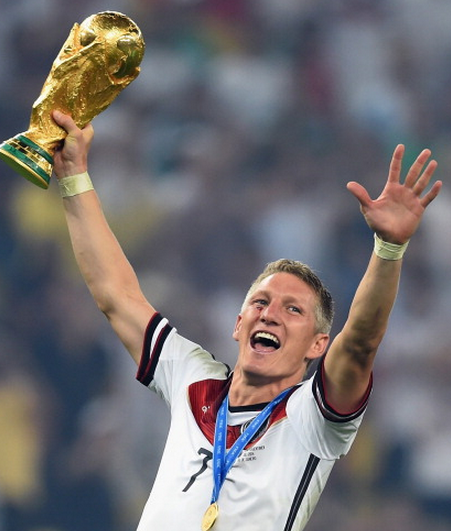 Last season Schweinsteiger’s season was stricken with injuries. At the start of the season, he missed eighteen matches from 11th August to mid November.

In all competitions he went on to play twenty-eight games in all competitions last season, due to two spells on the sidelines with injury. His second injury was a tear in his joint capsule, which saw him miss wins against Eintracht Frankfurt and TSG Hoffenheim.

He captained the Bavarians ten times and rounded off his career at Bayern winning the Bundesliga and getting on the score sheet in his final game in front of the Allianz Arena crowd. 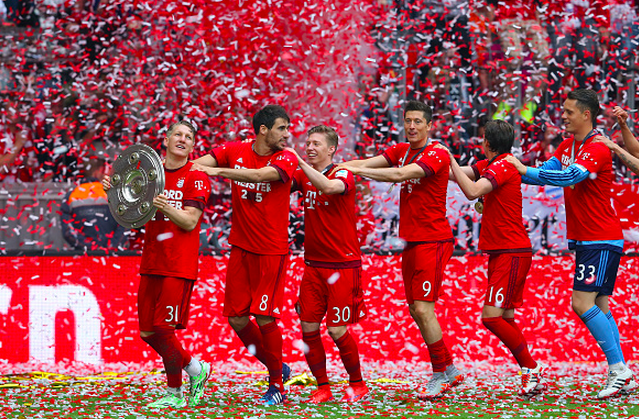 2013 German Footballer of the Year 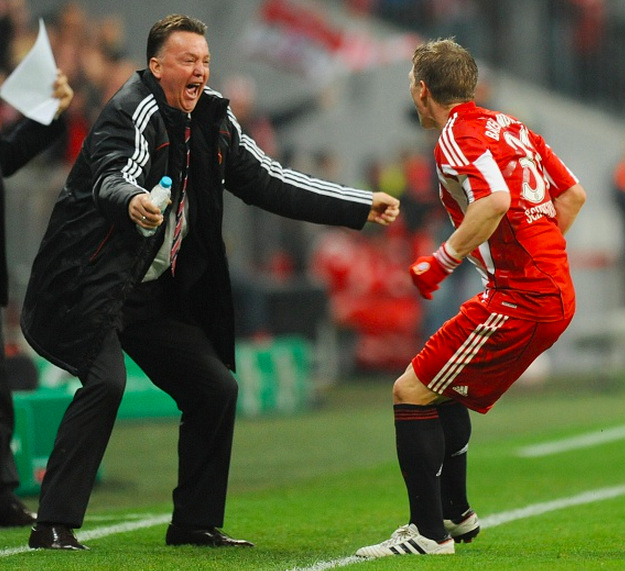 RB Leipzig vs Bayer Leverkusen preview: How to watch, kick-off time, team news, predicted lineups, and ones to watch 2 days ago

Union Berlin vs Hertha Berlin preview: How to watch, kick-off time, team news, predicted lineups and ones to watch 10 days ago

RB Leipzig vs Bourssia Dortmund preview: How to watch, kick-off time, team news, predicted lineups and ones to watch 24 days ago

Bayer Leverkusen vs Wolfsburg preview: How to watch, kick-off time, team news, predicted lineups and ones to watch a month ago

Sandhausen 2-2 Werder Bremen: Honors even a month ago

Hertha Berlin vs Borussia Monchengladbach preview: players to watch, team news, how to watch and prediction a month ago

Bayern Munich vs Hoffenheim preview: How to watch, kick-off time, team news, predicted lineups and ones to watch a month ago

SV Darmstadt 3-0 Werder Bremen: Another bad day for Bremen a month ago

Bayer Leverkusen vs Bayern Munich preview: How to watch, kick-off time, team news, predicted lineups, and ones to watch a month ago

Borussia Dortmund vs Mainz 05 preview: players to watch, team news and prediction a month ago

Werder Bremen vs FC Heidenheim preview: How to watch, kick-off time, team news, predicted lineups, and ones to watch 2 months ago
//