As Manchester United fans gathered outside Old Trafford to protest against off the field issues, it was in fact their side's result and performance on the field that left much to be desired.

After going a goal up in the 10th minute thanks to a curling Bruno Fernandes effort, the home side were in the ascendency and looked dangerous when going forward.

However, on the half hour mark, Ole Gunnar Solskjaer's side began to crumble against what was a very strong Liverpool performance.

Jurgen Klopp's side began to dictate possession and the tempo of the game, with Diogo Jota and Roberto Firmino both capitalising on set pieces to put the visitors ahead in the first half.

The Red Devils were in a state of shock and it could not have been more evident in the opening stages of the second half.

Firmino scored his second goal of the game just two minutes after the whistle blew and Liverpool were gifted a plethora of chances from United's sloppy, discomposed play.

The home side were gifted a way back into the game as Marcus Rashford slotted home in the 68th minute, but Mohamed Salah put the result beyond doubt in the final minute of the 90 as he raced through one-on-one and passed the ball into Dean Henderson's gaping left-hand corner.

But in what way can we analyse the game from a tactical point of view?

When Liverpool won the Premier League in the 2019/20 season, one of the main reasons why so many teams struggled to play against them was because of their relentless high press.

Teams would try to play out from the back and Liverpool's front line would pounce instantaneously, recovering the ball at a rapid rate and scoring countless goals from doing so.

The visitors were pressing high up the field from the off, attempting to force United to play the long ball. However, their attacking line was wide open in the press, allowing Henderson to play short passes to United's back line, who had the time and space to shift the ball upfield.

When Liverpool were pressing high and wide, their midfield three of Georginio Wijnaldum, Fabinho, and Thiago Alcântara were leaving empty spaces between the lines. 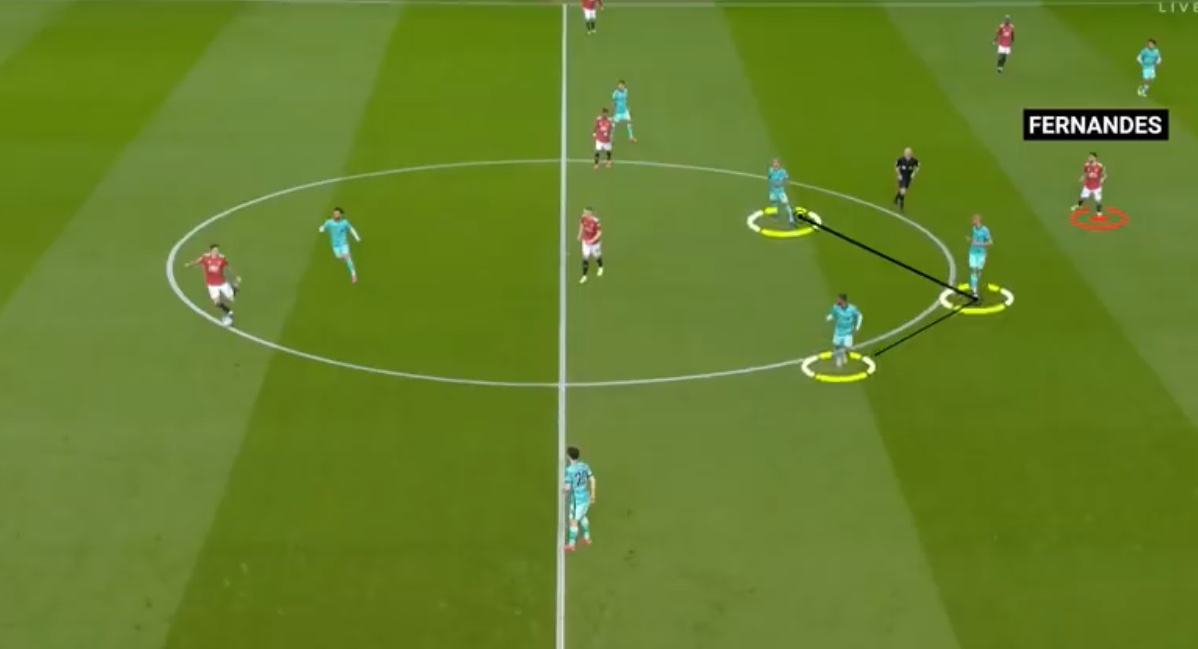 From this, Bruno Fernandes could pick up the ball in the pockets and look to create angles.

United were also able to take advantage of the width of the pitch from this, as Salah could be caught high and wide, allowing Paul Pogba to play in a narrow position. This meant that whenever the hosts were in possession, Luke Shaw and Pogba had a two on one against Trent Alexander-Arnold. 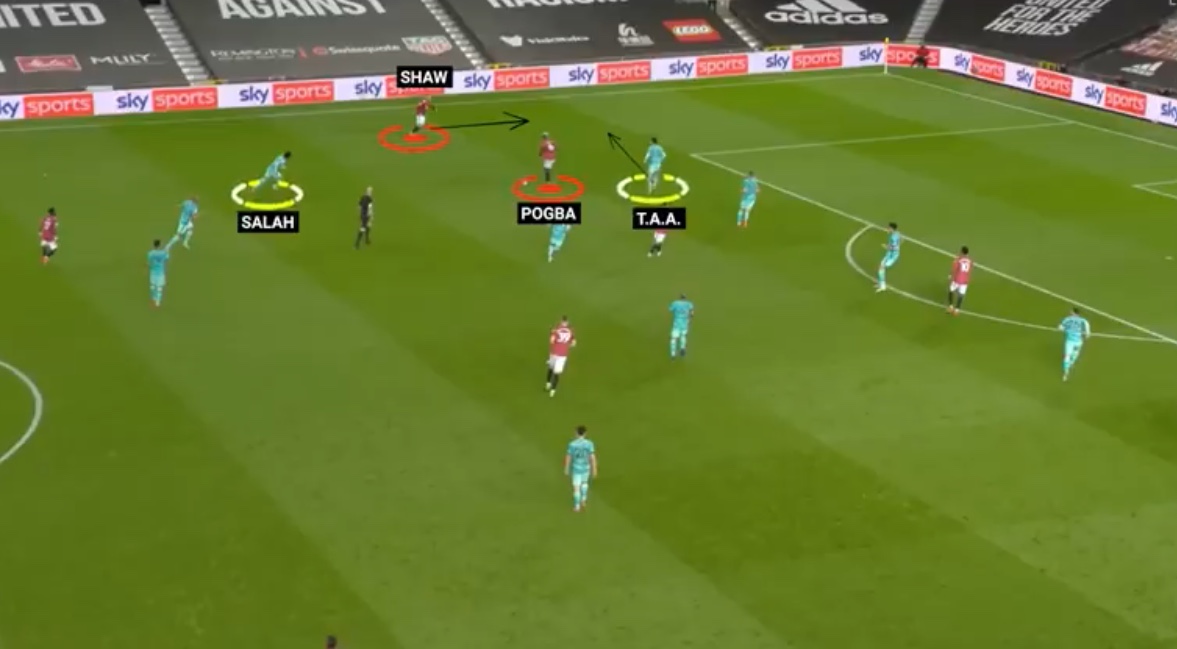 The Liverpool full-back didn't know whether to close down Pogba or close down Shaw, meaning one of the two United players had the license to bomb forward under zero pressure.

Similarly, Jota could also be slow to track back when Liverpool lost possession, meaning that Aaron Wan-Bissaka and Rashford could double up against Andy Robertson – this is ultimately how the first goal came about, with Wan-Bissaka completing one of his three successful dribbles before feeding Fernandes to open the scoring. 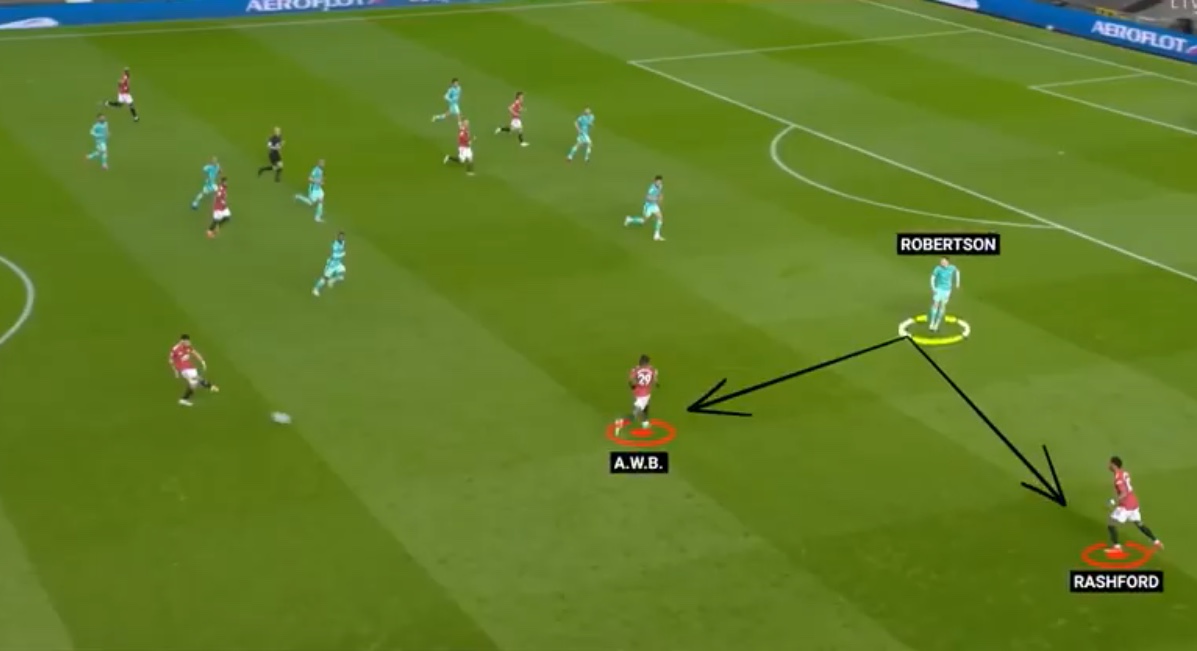 However, Liverpool then went on to change their pressing style in the latter stages of first half and for the entirety of the second.

Instead of Jota and Salah pressing out wide, the two Liverpool wingers began to press in much more narrow positions – but still as high up the field as in the first half. 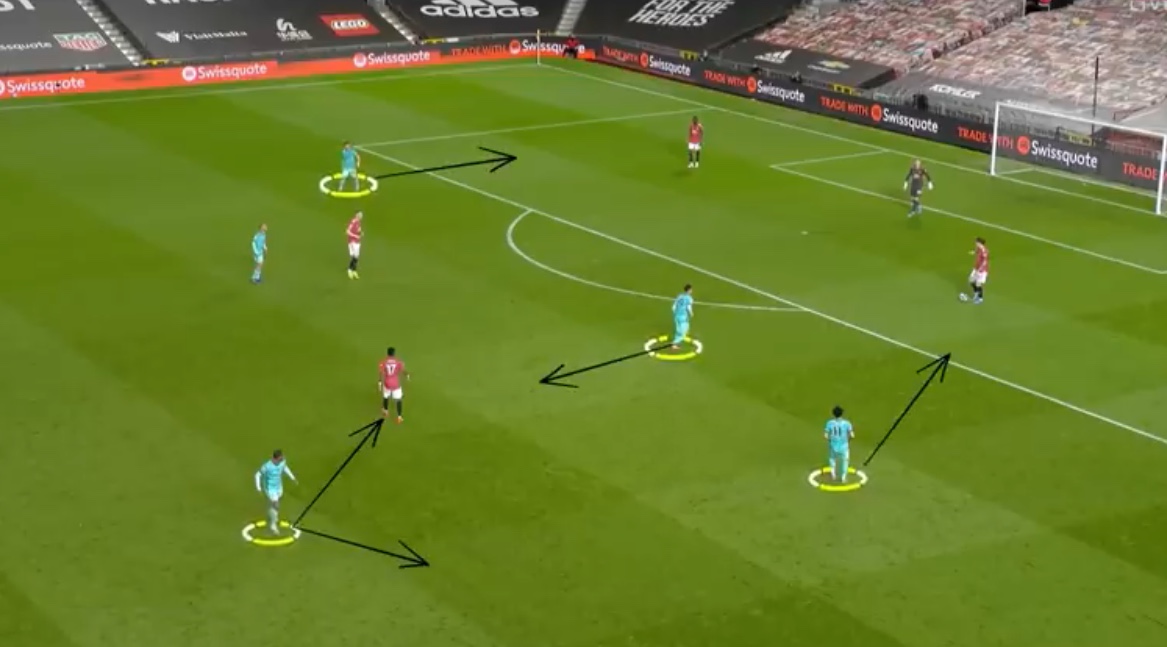 This allowed Firmino to press just behind them. From this, the short pass option to the pivots in Fred and Scott McTominay was nullified, meaning that Henderson had to play the long ball. 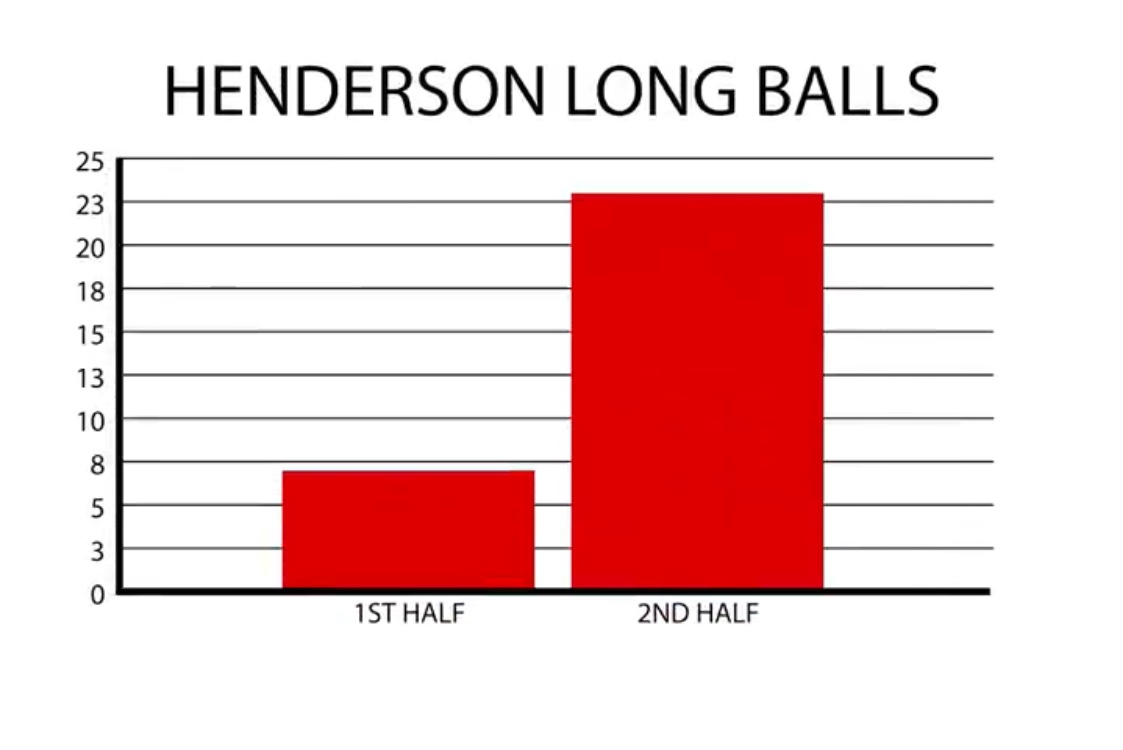 The Liverpool midfield, in turn, began to win back possession from the long ball and because their front three were so high up, United's backline were vulnerable on countless occasions.

Due to the lack of success from the long ball, Solskjaer's side opted to mix it up and sometimes revert back to playing it out from the back.

Unfortunately for United, this tactic was too risky and Liverpool made the most of a sloppy pass by Fred to win the ball high up – this lead to Firmino's second goal. 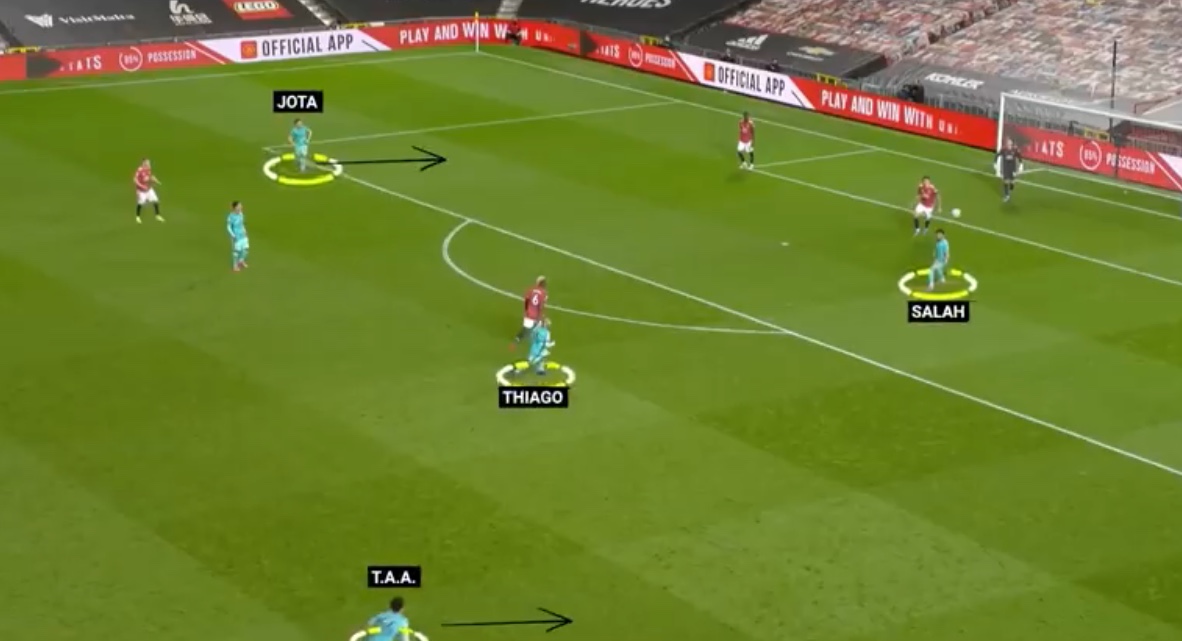 After completing his brace, the Brazilian remained sitting behind Liverpool's narrow wingers and the home side couldn't get out.

The United boss spotted the danger and decided to act before it became a whitewash. The Norwegian brought Mason Greenwood on for Fred, meaning that Rashford could move over to his strongest position on the left wing. Pogba then played the pivot role in Fred's absence, and the switch began to have an impact on the game.

Although Pogba has shown a lack of discipline when it comes to defensive duties, there is no doubt that he is a much more composed player under pressure than Fred is.

Due to this, Henderson could start to play the short pass again and United began to build up more assured attacks.

This ended up leading to United's second goal – Pogba picked up the ball in a deep position and because of his ability to play a range of passes, Liverpool's midfield had to mark the runners, providing the Frenchman with room to roam forward. He sprayed the ball forward, which gave Rashford and Edinson Cavani the space to play a quick one-two before the academy graduate put the ball into the back of the net.

This switch continued to work as United kept possession and mounted a catalogue of attacks as they went in search of an equaliser.

But as the final minute approached, the home side committed all their men forward in desperation, meaning that Salah received the ball with the entirety of the attacking half to himself before scoring his side's fourth goal of the evening.

All in all it was a bitterly disappointing encounter for everybody associated with the red side of Manchester. After resting key players in Tuesday's game against Leicester City, you could have been forgiven for thinking United would have dealt with Liverpool's threats much more efficiently.

However, United were there for the taking, and it is fairly evident that an experienced defensive midfielder is needed at the club in order to deal with the problems that Liverpool caused on Thursday evening.

Furthermore, the absence of Harry Maguire was there for everybody to see, and it is the games where the United captain doesn't play from which Reds fans realise just how important he is to the stability and consistency of the side.

Erik ten Hag says he is 'totally satisfied with the whole team' ahead of Manchester United's Premier League fixture against Brighton &amp; Hove Albion 4 days ago

Why are Manchester United interested in Benjamin Šeško? 8 days ago

Manchester United announce the signing of Christian Eriksen 25 days ago

Crystal Palace vs Manchester United preview: How to watch, kick-off time, team news, predicted line-ups and ones to watch. 3 months ago

Erik ten Hag: "I had choices to work at a different club, with a better foundation. But I chose Manchester United." 3 months ago