While the takeover saga rolls on, Newcastle United have to now turn their attention to the Premier League in a ‘Castore derby’ clash against Wolverhampton Wanderers at Molineux.

Newcastle will have to wait until early January to see if their long-awaited takeover is approved and  Steve Bruce is facing more scrutiny from Newcastle supporters as they are yet to record a win from their opening seven matches in all competitions.

The Magpies just sit above the relegation zone in 17th.

In contrast, Bruno Lage is starting to adjust to life in the Premier League with Wolves after a difficult start with three successive 1-0 defeats, but his side looked to have turned a corner and adapted to his philosophy as they claimed their second victory of the season last time out against Southampton to move into 14th on six points.

Though, the West Midlands outfit are yet to score at Molineux this season in the top-flight and failed to register a shot on target in their previous home defeat to Brentford which will be a cause for concern for the Wolves faithful.

Newcastle, on the other hand, will have to be more clinical in front of goal if they are to end their winless run.

Their last two matches against Leeds United and Watford have had a combined 13 shots on target but only seen two goals. With the second international break coming up, both sides could do with a positive result.

Wolves remain without Jonny, Pedro Neto and Yerson Mosquera, who are all long-term absentees, though left-back Rayan Ait-Nouri can return to the side after the French youngster missed the win at Southampton with a concussion.

Newcastle have no new injury concerns ahead of the visit to the Black Country.

Callum Wilson, Jamaal Lascelles and Jonjo Shelvey all look set to return to training in the next few days but will not be available until after the international break.

It’s likely that Bruce will stick with the same side which drew 1-1 with Watford at Vicarage Road.

In the last five consecutive Premier League meetings between the two sides, it’s been the exact same scoreline on each occasion: 1-1.

The most recent of these encounters at Molineux was in October 2020 as Jacob Murphy’s clever free-kick rescued Newcastle a late point after Raul Jimenez thought he had struck an 80th-minute winner.

That was the last time the Mexican forward scored at home before suffering a life-threatening fractured skull against Arsenal at the Emirates Stadium.

Wolves have to look back to January 2003 in their last win over Newcastle in the West Midlands and that fixture turned out to be a five-goal thriller in the FA Cup Third Round, with the hosts edging it 3-2.

Newcastle’s last victory at Molineux arrived in February 2017 when both sides were in the EFL Championship, as Aleksander Mitrovic’s 44th-minute close-range finish sent The Magpies back to the top of the table, one point ahead of title rivals Brighton.

Their most recent triumph in the Premier League came in October 2011 when first-half goals from Demba Ba and Jonas Gutierrez inspired Newcastle to a 2-1 win, and they went on to secure a memorable 5th placed finish under Alan Pardew in the 2011/12 season.

After the Mexican international scored the match-winner in the 1-0 win against Southampton at St Mary’s Stadium.

Jimenez will now be hoping to get on the scoresheet in front of his home supporters against The Magpies, where he struck his last goal 342 days ago.

Wolves’ number nine has had the most shots at goal so far this season out of his teammates with 16 and he currently sits the 12th highest in the league standings, joint level with West Ham United's Said Benrahma and Watford’s Ismaila Sarr.

In the absence of the injured Wilson and the limited options Newcastle have in the attacking department, Saint-Maximin has dazzled for Newcastle in the early stages of the campaign.

In his last four appearances in the Premier League, the Frenchman has been involved in five of Newcastle’s seven goals scored in the top-flight this season.

It’s no surprise to see his efforts have been rewarded with a nomination for September’s Player of the Month award, alongside Cristiano Ronaldo, Mohammed Salah, Antonio Rudiger, Joao Cancelo and Sarr.

If Bruce’s side are to record their first three points of the season at Molineux, then Saint-Maximin will likely play a huge role in the outcome of the contest.

This match is not available to be broadcast live in the UK due to the 3pm kick-off television blackout.

Instead, highlights can be seen on Sky Sports Football’s YouTube channel once the match has finished or alternatively, BBC One’s Match of the Day, will provide all of the action from 10:40pm.

The Warm Down: Eddie Howe's reign at Newcastle starts with draw 8 days ago

What fringe players could benefit the most from Eddie Howe's arrival and adapt to his philosophy? 10 days ago

Which Newcastle United players are in action during November's World Cup qualifiers? 18 days ago

The Warm Down: Eddie Howe watches Newcastle United suffer their worst-ever league start to a season after an unsatisfying draw at Brighton 22 days ago

Brighton 1-1 Newcastle: Sanchez sent off as Newcastle scrape a point against Brighton 22 days ago

Brighton &amp; Hove Albion vs Newcastle United preview: How to watch, kick-off time, team news, predicted lineups and ones to watch 23 days ago 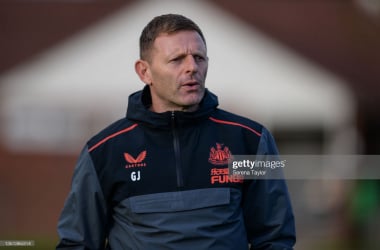