Växjö, that find themselves at the absolute bottom of the Swedish table are forced to go for three points and the win in the remaining rounds of the Damallsvenskan. Unfortunately, when they hosted KIF Örebro on Friday, it was a goalless event and the two sides shared the points.

Linköping hosted newcomer Umeå at Linköping Arena on Saturday. The home-team showed straight away that they sought revenge from the last encounter in Umeå when they lost 3-2, although they had the lead, 2-0 before the break.

Nigerian Uchenna Grace Kanu led her team to a comfortable 3-0 win by scoring two goals, one in the first half and one in the other. One of the goals came from an own-goal in a messy situation during a corner-kick.

Vittsjö is back on a winning streak and came to Uppsala with confidence after three straight victories. When the final whistle sounded the team from Skåne had secured the fourth win in a row after Clara Markstedt had scored the winning goal.

In mid-August, Madelen Janogy made her comeback to the pitch with Piteå in the Damallsvenskan. This after a break in her career due to mental illness, which had put an end to her adventures abroad in Germany with Vfl Wolfsburg.

However, Janogy put her name on the score-sheet again for the first time this season when she equalized, 1-1, on Sunday when Piteå played Kristianstad at home. This was after Norway international, Therese Sessy Åland had put the guests in the lead already in the 10th minute when she fired off a shot from outside the box impossible for Piteå's goalkeeper Guro Petterssen, Sessy's fellow, to save.

After Janogy's goal Kristianstad took back the lead one more time before Piteå equalized on a penalty through Julia Karlernäs to 2-2. The match seemed to end in a draw for a long time, but in stoppage time, Eveliina Summanen headed the ball into the goal and got the win for Kristianstad.

Göteborg were pressured to win when they welcomed Eskilstuna on Sunday. After two straight losses, they needed the three points to not let Rosengård end up way too far ahead for the remaining rounds.

The Finland internationals Emma Koivisto and Natalia Kuikka, led Göteborg to a 3-0 victory. Koivisto put the ball into the goal in the 19th minute after her fellow had missed making it 1-0 after a penalty early in. It didn't stop Kuikka from scoring later on though, because in the 28th minute her header changed the score-sheet to 2-0.

The end result 3-0, came in the second half when striker Pauline Hammarlund found the back of the net.

Rosengård were eager to show Djurgården that the draw from their last meeting was a one-timer. The reigning champions owned the ball throughout the first half and were the only team that had several chances to score before the referee ended the first act. But despite the home team's chances, it was 0-0 at the break.

The closest one to score during the first 45 was Denmark international Sanne Troelsgaard who fired a shot from a distance that smashed at the bottom of the bar and out again.

It was Anna Anvegård that finally scored the liberating 1-0 goal right at the beginning of the second half. Anvegård intercepted a return near the goal, and the home team was filled with air again.

Just nine minutes after the lead goal, Rosengård extended their lead to 2-0 through Mimmi Larsson's replacement for the day, Anam Imo, who thus got revenge on all the chances she missed during the first half.

In the final stages of the match, Rosengård's Icelandic midfielder Glodis Perla Viggosdottir was able to head in the final result to 3-0. 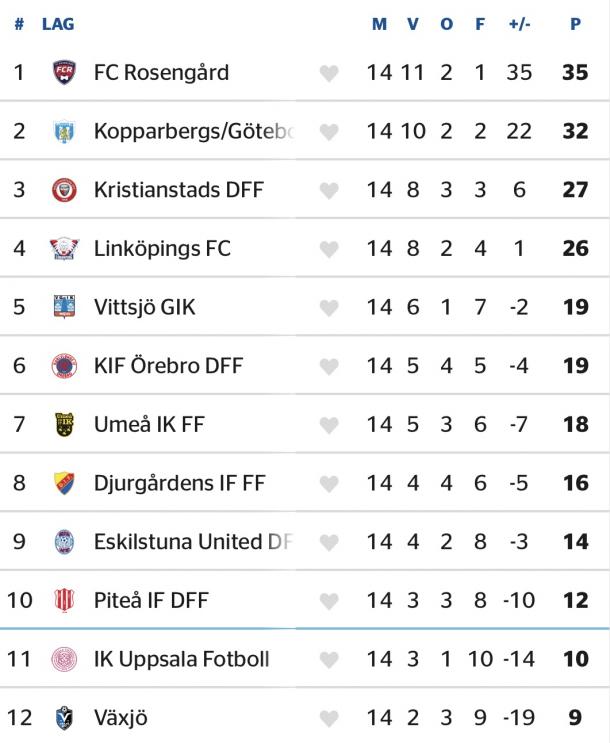