Göteborg have appeared strong in the first half of the Damallsvenskan this season. In eleven rounds, the team had nine wins and two draws, but in the last two rounds, they have struggled.

The previous round, when they played against FC Rosengård, Göteborg lost 3-0 and on Saturday the team's second straight loss came when they visited Kristianstads DFF.

Göteborg had a massive advantage in the play but had big problems with being clinical in front of the goal. Instead, it was Kristianstad that grabbed one of the few opportunities they got.

The only goal in the game came in the second half through the home team's Norweigan Therese Sessy Åsland.

Rosengård were showing early into this game that were chasing their revenge after their previous meeting that ended with a win for Eskilstuna.

After an early goal delivered from striker Anna Anvegård, Eskilstuna equalized through Loreta Kullashi through a penalty before the break.

However, the reigning champion would regain the lead and go on to victory, as they have done so many times before. From the penalty spot, Anna Anvegård was able to score in her second goal of the day, which decided the battle at Tunavallen.

For the third game in a row, Djurgården managed to keep their opponents from scoring and got a clean sheet. Piteå, who recently announced the return of Madelen Janogy, are struggling at the bottom of the table.

23 minutes into the first half, Djurgården's Michaela van den Bulk, who recently returned to the game after an ACL injury, scored the game's only goal, giving the Stockholm team three important points.

Vittsjö took control of the game early into the first 45  when they hosted Växjö on Sunday. In the second half, their 2-1 lead was extended, and the game ended 3-1.

Goalscorers for Vittsjö were Elizabeth Eddy and Emily Gielnik, while Nellie Karlsson scored Växjö's goal. One of Vittsjö's goals was an own goal from the guests.

KIF Örebro's Nellie Lilja made it 1-0 in the first half when they welcomed Linköping at Behrn Arena in the pouring rain on Saturday. In the second half, Linköping worked hard to get their way back into the game, and in the final minutes, it paid off when Linköping equalized through Norweigan Frida Leonhardsen Maanum.

It is worth mentioning that Lina Hurtig played her last game with Linköping as she was announced as a Juventus player on Monday evening. The Swedish striker has signed a two-year-deal with the Italian champions.

When this campaign's two newcomers faced each other on Saturday, it was Umeå that won 1-0 when they hosted IK Uppsala. Therese Simonsson scored the only goal of the match in the first half.

The victory was Umeå's fourth in the last five matches, and their fourth straight victory at their home stadium. 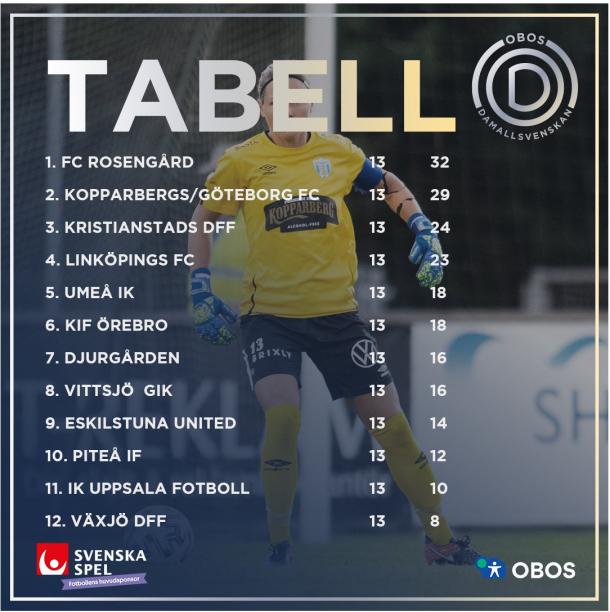 "We Rise with More Eyes" - The Football Revolution 7 months ago