After an up-and-down September, The Hammers found themselves in seventh, after a last gasp Michail Antonio winner against Leeds.

West Ham took on fellow Londoners Brentford, at the London Stadium, where the fans and pundits alike expected a West Ham win.

The final fixture before yet another International break, Moyes' men welcomed The Bees' to East London. The game started poorly for the home team, as Bryan Mbeumo put the visitors ahead in the 20th minute.

West Ham retaliated in the second half, after a much better performance seen them claw level on the 80th minute, with Jarrod Bowen lashing it in.

The game was to be decided in the final ten minutes, with two crucial moments at each end of the pitch. Tomas Soucek was a whisker away from heading it in the back of the net in the 85th minute, but it was Brentford who stole the points, with a scrappy winner in the 94th minute to leave the travelling fans in raptures.

Man of the Match: Bryan Mbuemo

After an excellent display from the visitors that saw them do everything but score, they finally got the breakthrough in the 74th minute, courtesy of a towering header from Angelo Ogbonna proved to be the winner for the Londoners.

Man of the Match: Declan Rice

West Ham's European adventure continued with a comfortable dispatching of Belgian opposition Genk at the London Stadium. After a lethargic start from the home side, they eventually took the lead through a Craig Dawson header.

Two more second-half goals from Issa Diop and Jarrod Bowen saw the hosts run out as 3-0 winners as Moyes' men made it three wins from three in their group.

Man of the Match: Issa Diop

One of the fiercest London derbies on the calendar, West Ham took on Spurs on a sunny Sunday afternoon in the Capital. The first half was a tight affair, with limited chances for both teams. the breakthrough finally came in the 72nd minute, as just like in the Everton game the Hammer's found the breakthrough from a corner as Michail Antonio found the ball straight at his feet for a simple tap in.

More delight for the home fans as there are not many better victories for the Irons than beating Tottenham.

Man of the Match: Kurt Zouma

To add to West Ham's jam-packed month they faced a 5th round tie in the Carabao Cup, from none less than one of the toughest sides in England and reigning Carabao Cup winners Manchester City.

A tight affair throughout, with Alphonse Areola making save after save to keep City's attacking force at bay. The game eventually ended as a stalemate and as customary in the Carabao Cup the match went straight to penalties.

Neither City nor West Ham have had the greatest of luck with penalties so as Mark Noble stepped up to take the first penalty many held their breath around the London Stadium remembering the miss against Manchester United. However, he put it away past Zack Steffen without fail. Phil Foden stepped up for City's first and put it wide of Areola's net.

Aaron Cresswell, Craig Dawson, Jarrod Bowen and Said Benrahma all put their penalties away and the visitor's had been knocked out of the Carabao Cup for the first time in five years. Another momentous night for West Ham and things only get better and better.

Man of the Match: Alphonse Areola 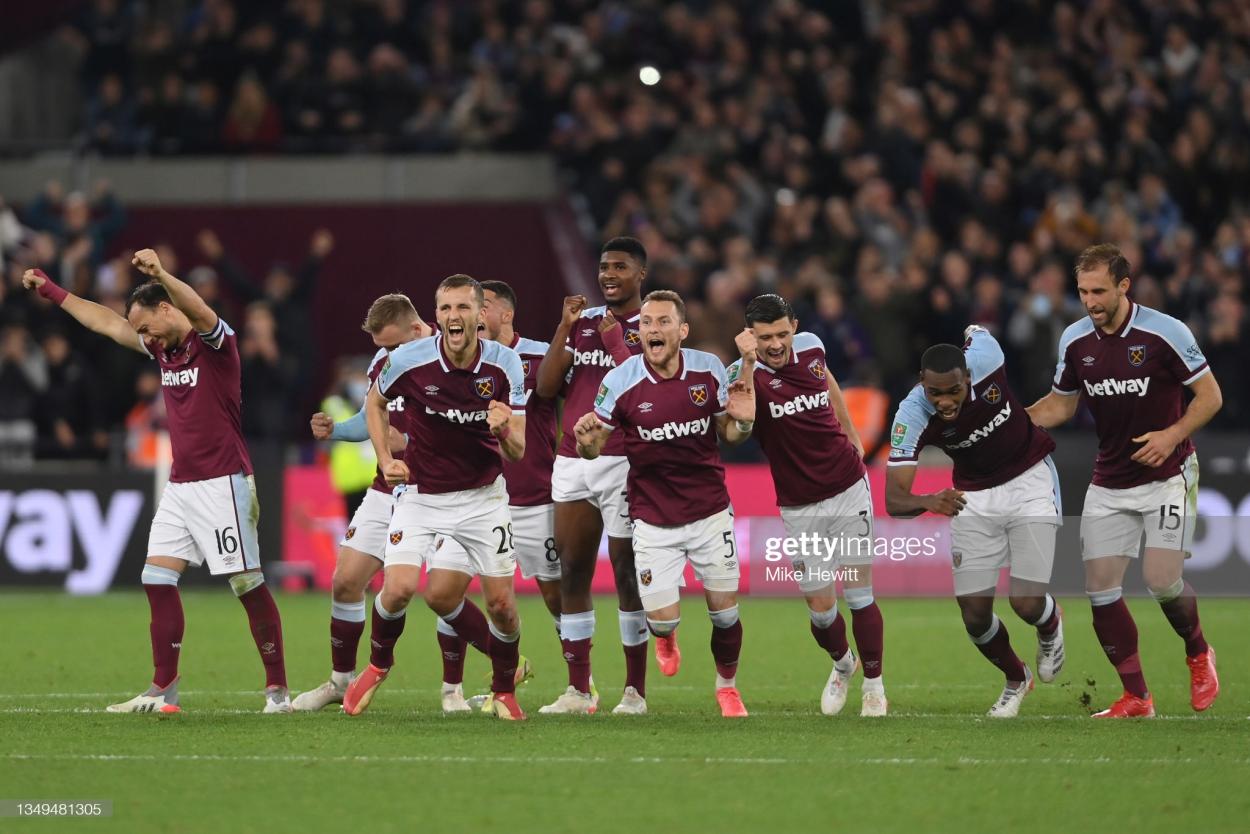 The final game of October for the excellent Hammer's seen them travel to Villa Park to face Aston Villa. West Ham certainly scared the hosts on Halloween with Ben Johnson giving the away side an early lead from a fantastic drive from outside the box.

The hosts fought back as Ollie Watkins fired in a shot however, this certainly didn't get the away side spooked. Fellow academy graduate to Johnson, Declan Rice fired in a low strike from 25 yards out.

After a red card for Kourtney Hause at the start of the second half, West Ham capitalised and added two more goals to the delight of the away support to round off a fantastic month for one of the most in-form teams in the league.

Man of the Match: Ben Johnson

Many West Ham fans would agree this was one of the best months they have experienced. Apart from an unlucky loss to Brentford, The Hammer's had a fantastic month, progressing in the league, Europe and the League Cup, it couldn't have gone much better.

Five wins in a row for the David Moyes' men just shows that they mean business this season and that their high-flying performances aren't a fluke.

Exclusive: 'What a journey we've been on' - Jamie Segal on West Ham's European tour a month ago

The Warmdown: Youthful Hammers bested by Croatian Champions 6 months ago