Manchester United suffer defeat at the hands of Middlesbrough on penalties in an end-to-end FA Cup clash, continuing their poor season in the same fashion.

A strong United side lined up to face Championship play-off hopefuls Middlesbrough in the FA Cup fourth round. Recently awarded Premier League Player of the Month, David de Gea, made way for Dean Henderson, otherwise it was a full-strength team for the home side.

It was the Red Devils who had the better of the opening exchanges. It all seemed to have come together in the 20th minute when returning midfielder Paul Pogba was brought down in the box by Dutch defender Anfernee Dijksteel. However, Portuguese superstar Cristiano Ronaldo fired his spot kick wide of the mark.

Ralf Rangnick's side did take the lead a little over five minutes later though, winger Jadon Sancho cut in from the left-wing and fired past Joe Lumley in the visitor's goal.

Despite much domination from the home side, Middlesbrough found a controversial equaliser through midfielder Matt Crooks. It appeared that substitute Duncan Watmore handled the ball in the build-up to the goal, but VAR allowed the strike to stand.

The game went the distance with teenager Anthony Elanga missing the decisive 16th penalty, seeing his shot sail high over the crossbar and into the Stretford End.

How can we analyse the tactics of this performance, what went wrong for the Red Devils on this occasion?

Ralf Rangnick's side had no trouble creating chances during this match. They regularly found space in behind the Middlesbrough backline and created a host of good goalscoring opportunities.

Wingers Marcus Rashford and Jadon Sancho found a lot of joy attacking at the wide centre-backs of The Boro. They were found time and time again by searching balls from Bruno Fernandes and Paul Pogba. This was made possible by the pairs' reluctance to remain in the centre of the park.

Rangnick lined his side up in a 4-3-3, with Scott McTominay  sitting as the holding midfielder and Fernandes and Pogba just in front of him. However, the two creative midfielders regularly found themselves in pockets of space out wide, where they could pick the ball up from centre-backs Harry Maguire or Raphael Varane and distribute the ball forward.

Fernandes and Pogba regularly linked-up well in triangles with full-backs Luke Shaw and Diogo Dalot as well as either winger, to draw Middlesbrough's defenders out of position and play the ball in behind.

This build-up play can be seen used effectively in the goal that Sancho scored. In the second-half especially, this was aided by the visitors pressing around the halfway line. This press allowed space to open up between the Boro midfield and defence. This space could be easily exploited by any of the midfield trio to drive the Red Devils forward.

However, the biggest issue United uncovered was their wastefulness in front of goal. Ronaldo, normally so assured in front of goal, was particularly poor. For as good as he was, Bruno Fernandes also missed two guilt-edged opportunities.

This all resulted in the hosts missing seven big chances across the 120 minutes of play. To put this into context, according to the Premier League, top-scorer Mohammed Salah has missed 12 big chances all season. This highlights how poor United's finishing was during proceedings.

It once again highlights the issues United are having with closing out games. One only has to look back to the Aston Villa matchup on January 15. This saw the Villains come back from two goals down to snatch a point, and once again saw Bruno Fernandes miss a great chance to win the game.

While United were wasteful, it would be hard to ignore what a good performance it was from the visitors. They came to Old Trafford and played fearlessly, as we should come to expect from a Chris Wilder side, owing back to his days with Sheffield United.

During the first-half, it was blatantly apparent that the 3-5-2 we would expect from Wilder was not working. The Englishman allows the wing-backs to play very high, thus allowing for wide options in their approach play. However, United were effectively creating space in behind the wing-backs, with former Red Devil Paddy McNair struggling particularly when it came to dealing with diagonal passes. This could owe to the fact he operates more effectively as a holding midfielder.

Wilder recognised this and opted to change to a more flat 5-3-2. This allowed for more defensive help and essentially nullified the wide threat. In an attempt to combat this, Rangnick stretched his full-backs very wide. While this created help going forward, Isaiah Jones had a lot of joy down the right for the visitors.

The wing-back teased a few delicious balls in before eventually setting up the equaliser. It was Jones who whipped the ball into the back post towards Watmore, who set up Crooks for a tap-in. The contentious equaliser highlighted how the visitors used the space in behind Shaw and Dalot well, with Watmore finding himself completely unmarked just outside the six yard box.

Boro continued with their bold style, regularly pressing United higher up the pitch. This was aided by goalkeeper Joe Lumley's awareness to be sharp off his line. He was quickly out to thwart a number of chances for United, particularly in extra-time. This helped to combat the ball over the top that was so useful in the first-half.

It was a confident performance by the visitors, who weren't phased by the Red Devils star power. They continued playing their game and plugging away, reminiscent of Sheffield United during the 2019/20 Premier League season.

All in all, it was a disappointing result for the Red Devils, that all but guarantees a trophy-less season once again, barring a miracle in the UEFA Champions League. This would also result in the fifth straight season without a trophy for the Manchester men. It could be noted that the winter break had a negative effect on the side, especially with the issues surrounding forward Mason Greenwood at the moment.

However, it must be stated that it was not a poor performance by the Red Devils. They were on top for most of the game and created some golden opportunities. If they can continue this vein of form, it will start to come together. It was a fluid performance that lacked that sharp cutting edge.

One worrying factor for Red Devils faithful would be the fact that the starting XI was strong. Failure to beat a Championship team with that good of a side out is disappointing, and they were clearly lacking strength in depth. The return of Edinson Cavani and Jesse Lingard to the squad will help aid the side. Manchester United will be hoping for a more clinical performance when they take on Burnley in the Premier League on February 8. 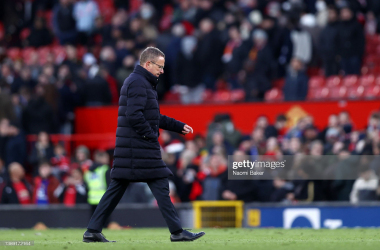 Manchester United manager Ralf Rangnick &#39;not happy&#39; after 1-1 draw against Leicester City a month ago
//