Tottenham Hotspur endured a drama-filled campaign to say the least. They finished seventh in the Premier League and also failed to grab a domestic cup albeit reaching the final of the Carabao Cup.

The Europa League exit to Dinamo Zagreb was an incredible low point, and all of the above led to the decision to sack Jose Mourinho six games before the season ended.

This season has been a rollercoaster for Spurs. Here is what VAVEL’S very own Tottenham writers made of the campaign:

In the last summer window, Mourinho signed seven new players for Spurs and although the now sacked manager failed to complete a full season at the club, the players have.

With the signings now having completed a full season in North London, or back in the capital as is Bale’s case, some of the newbies have not had the greatest starts to life with their new club.

Both Reguilon and Bale moved to Spurs last summer from Real Madrid after falling out of favour with boss Zinedine Zidane.

Reguilon started the season very well before being injured around Christmas and into the new year. Since then, the Spaniard has had more of a difficult time, making minor mistakes that have led to poor results, notably his horror own goal against Aston Villa.

However, the defender is still only young and although he can improve his defending, he has shown ability that will only get better with maturity and experience.

Bale on the other hand is back in London after a successful career in Spain, but his season has been on-off ish.

When he first joined, the Welshman was injured, and it took him a while to come back to full fitness. From then, manager Mourinho did not give him regular football to get back on his feet.

Even with a lack of regular football, he still came on and did his job when required, helping Spurs to the three points on multiple occasions.

He may be coming towards the end of his career, but fans of the club believe he was ‘born to play for Tottenham’ and although his current loan is coming to an end, the fans will be hoping the club extend the contract for another year.

Doherty has not had the easiest time during his first season. With occasional starts and sloppy defending, the Irishman failed to become a regular in a defense that has been a ticking time bomb.

Compared to midfielder Hojbjerg who has been an instrumental part of the team during the campaign.

The Dutchman was one of two outfield players in the whole league to play every minute for their respective club in the league this season. Additionally, he made the third greatest number of tackles.

This has not helped new signing Hart get into the first team. Hart joined the club on a free transfer at the start of the season.

He was primarily brought in as a player voice. Hart has not been getting regular football for any of his clubs in recent years, but his experience was what Spurs thought they needed to push them in the direction of winning a trophy.

However, with only rare appearances in the cup competitions, that is all his signing has been. But after a misread social media post after Spurs crashed out of the Europa League, that might be all he is remembered for when he leaves the club in years to come.

Benfica player Vinicius joined Spurs last summer on loan. Brought in as a back-up to Harry Kane, he has been nothing but that.

But much like Bale, when the forward has played, he has taken full advantage of the opportunity and scored several goals, including a hat-trick at the start of the year in the FA Cup.

Spurs have the difficult task of deciding whether to sign him on a permanent basis now his current contract is up and with the possibility of star marksman Kane leaving the club, Vinicius could be an ideal replacement.

After the international transfer window closed, Spurs signed defender Rodon from Swansea City in the EFL and towards the end of Mourinho’s tenure he was playing regularly in the team.

However, since interim manager Ryan Mason joined the club, he has played two minutes of football.

The defence has been weak throughout the whole season and even with the three new defenders the team signed last year, this summer the defence still needs an overhaul. However, Rodon has been the only shining light.

The defender is still only in the early stages of his career and what he has shown so far is much ability and strength to lead the back line.

With the club needing to sign new and quality players in the upcoming window, Rodon should be one player making his way to regular football next season.

Overall, it has been a had season for last year's summer signings. Only one of them has had a season to remember. Although players like Rodon and Reguilon made their Premier League debuts this season, they will both be hoping for a better second season.

Hojbjerg has been the best player, after Harry Kane, in the team and with a winning mentality will only guide the club to success in years to come.

The club have difficult decisions to make in the upcoming window, but an overhaul of the defence and new signings across the field is what is needed.

Club talisman Kane ends yet another season as the Player of the Season for Tottenham, leading the line in typical Kane fashion.

The Englishman took home both the Golden Boot and Playmaker Awards this campaign, registering 23 goals and 14 assists – In doing so, he became only the third Premier League player to claim both awards in the same season.

In what has been a difficult and disappointing season for Spurs, the form of Kane has been crucial to their season, having formed such a deadly partnership with Heung-Min Son, it would be very difficult to imagine where Tottenham would be without.

A consequence of such a poor season from the squad on all fronts has led to the fuelling of speculation regarding Kane’s uncertain future at the club.

He has been linked with a move away in the summer transfer window in a bid to challenge for titles, something that hasn’t materialised in the way he would have hoped at Tottenham.

As he turns 28 following the Euros, time in his career is running out and he has on numerous occasions expressed his desire to be the best and challenge for the biggest trophies.

With records belonging to the likes of Alan Shearer, Jimmy Greaves and Thierry Henry within touching distance for Kane, there is an attraction for him to stay in the Premier League – something which will give fans hope he stays put.

Despite such a phenomenal individual record this season, due to the underperformance at the club, Kane hasn’t been immune to criticism over the course of the campaign.

Take the Carabao Cup Final defeat to Manchester City for example, in the big games that Spurs have failed to perform in, the striker has had to endure tough and perhaps undue criticism.

There is a general expectation that he has to grab each game by the scruff of its neck, however, there is only so much he can do without the support of his teammates.

Coming off the back of such a successful season in front of goal, it is hoped he can maintain his form going into the Euros and help England conquer the continent.

New management coming into N17 this summer will be desperate to retain his services, as the three-time Golden Boot winner will be crucial in the rebuild Tottenham will start this transfer window.

It is hard to pin a certain moment in a season where the drama never ends, but Liverpool away - 16th December 2020 - was a night which, for me, shifted the tide to turn Tottenham’s season in an ugly direction.

At the time, believe it or not - the encounter was hyped up to be an early title decider. Tottenham were top of the league and Liverpool were a close second, after previously winning the league in the last campaign.

The game was a painful one. Mourinho approached it in his typical villainous ways: get bodies behind the ball, be compact, and hopefully hit Liverpool during transitions with the space left in-behind.

They went into half-time with a 1-1 score but the second-half saw Steven Bergwijn squander two fantastic opportunities, as did Kane which was the first signal it wasn’t going to be Spurs’ night.
Roberto Firmino then planted a header into the corner in the dying minutes of the game, giving Liverpool a 2-1 lead.

This late slip seemed to be the beginning of the end, for reasons we are not sure. Ever since Spurs spiralled down into the eventual state they’re in now. The loss seemed to detriment the squads mentality and momentum.

If Spurs had won that game, who knows? Football is a game of fine margins and momentum.

Spurs had intentions this campaign - under Mourinho - to settle down, turn into killers, stay out of the limelight and do what the predecessor Mauricio Pochettino failed to do: win a trophy.

Spurs did everything they could in their power to stay in the limelight. From the Super League, manager sackings, constant bad performances, cup final failings, and the Kane saga (which has only just begun)

If anyone could tell you what Tottenham will shape up like in 2021-22: spoiler alert - they can’t.

Spurs are mangerless and potentially Kane-less. Kane, Dele, and Son all embraced after Leicester in a warm hug that suggested a goodbye. But it represents a lot more than that.

Mourinho was brought in to complete what Pochettino started, but this season just showed that it all needs to be scrapped and start again.

A complete rebuild from top to bottom and a Kane departure could be the start of it.

If someone had said that Spurs would finish in Europe and above Arsenal most fans would’ve been very satisfied but not so much if you said that Spurs came seventh, three points behind West Ham, to qualify for the Europa Conference League.

Spurs will be in the Europa Conference League next year (all thanks to Ryan Mason).

What a crazy, crazy season.

Can Spurs afford to let Hugo Lloris leave this summer? 5 days ago

Kane, Son, and Lamela all grab end of the season awards 8 days ago

Opinion: Did Harry Kane deserve to win PFA Men’s Player of the Year? 8 days ago

Nile John named Spurs Scholar of the Year 9 days ago

Could Spurs land Skriniar? 11 days ago

Serge Aurier:&nbsp;“I’ve reached the end of a cycle” 11 days ago

Marcel Sabitzer refuses to comment on his future 12 days ago 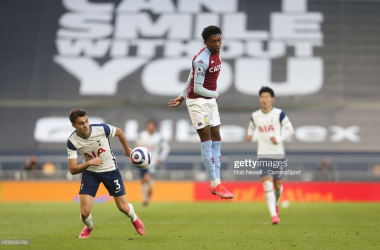 Sergio Reguilon: A review 12 days ago
//