When Newcastle United lost 3-0 against Chelsea at St James’ Park back in October, The Magpies were in despair and on course for relegation, sat in 19th with just four points from their opening 10 matches, while The Blues were enjoying life at the top of the Premier League table.

Five months later, Newcastle are the second most inform side in the league behind only Liverpool, are on a nine-match unbeaten run in the top-flight in 2022 and appear to have now brushed aside any relegation fears.

For Thomas Tuchel’s Chelsea, they now in third and sit 13 points behind league-leaders Manchester City and the club faces distractions off the field due to the uncertainty in their long-term future following their owner Roman Abramovich being sanctioned by the UK government.

Newcastle head coach Eddie Howe has won three of his five Premier League away games against Chelsea during his time at AFC Bournemouth, with the last of those victories arriving in December 2019.

Can he guide The Magpies to their first win at Chelsea in a decade?

VAVEL looks back at three of Newcastle’s most memorable meetings at Stamford Bridge against The Blues.

In their first season back in the Premier League following promotion as Championship winners, Newcastle produced an epic Carling Cup third-round classic over Chelsea which ended with a dramatic injury-time winner from Shola Ameobi.

The Blues, managed by Carlo Ancelotti, took an early six-minute lead through Patrick van Aanholt before Nile Ranger and Ryan Taylor’s free-kick in the space of five minutes stunned Chelsea and completed the turnaround for Chris Hughton’s side.

It got even better for Newcastle inside just four minutes into the second half as they extended their advantage through Ameobi, whose sumptuous curling effort sailed past Ross Turnbull and the hosts were dealt more bad news when they were forced to play the remainder of the game with 10 men, having already used all of their substitutions and Yossi Benayoun going off injured.

But Chelsea showed fighting spirit and set up a grandstand finish in the capital when Nicolas Anelka halved the deficit with a well-taken side-footed finish and then levelled the contest from the penalty spot in the 87th-minute.

With extra-time suddenly looming, Paulo Ferriera almost won it for Chelsea in the closing stages only to strike the post before Ameobi incredibly struck the match winner in added time when the forward headed home Jonas Gutierrez’s corner to inflict The Blues with their first defeat of the season and round off an extraordinary evening for Newcastle in west London.

On the penultimate weekend of the same season where the black-and-whites came out on top in that Carling Cup seven goal thriller, Chelsea and Newcastle both had little to play for when they met in the league as The Blues had already guaranteed a second-place finish, while The Magpies were in no danger of relegation and yet this top-flight meeting proved to be an action-packed encounter with another late twist.

A rapid start from Chelsea saw them break the deadlock just two minutes in when Branislav Ivanovic volleyed home Frank Lampard’s corner after it was flicked on by Fernando Torres.

Newcastle got themselves back on level terms eight minutes later as John Terry brought down Peter Lovenkrands on the edge of the area and Taylor’s resulting free-kick, with the help of a fortuitous deflection off Gutierrez, left Petr Cech helpless and The Magpies dug deep to go in at the interval at 1-1.

Chelsea thought they had scored an 83rd-minute winner as Alex delivered a thumping header from Lampard’s free-kick past Tim Krul only for Steven Taylor to miraculously come to Newcastle’s aid with a free header deep into stoppage-time.

Alan Pardew’s men sealed a respectable 12th place finish in their return back to the top-flight, while the match turned out to be Ancelotti’s final home game as Chelsea manager.

Unsurprisingly, in all of Newcastle’s meetings with Chelsea over the years, this result in particular stands head and shoulders above the rest and it’s no exaggeration, Papiss Cisse scored one of the greatest goals ever in Premier League history.

His first on 19 minutes wasn’t bad either as Davide Santon found Cisse on the edge of the box and after an exquisite first touch, he flicked the ball up and unleashed a breathtaking left-footed volley into the top corner.

But in added time, he produced a moment of sheer brilliance when he let the ball bounce and with the outside of his right foot, struck a phenomenal half-volley from distance, which looped over Cech into the far corner.

The Senegalese forward was later awarded the Goal of the Season award, but his overall contribution in his debut season, when he joined the club from SC Freiburg in January, was magical with 13 goals in just 12 appearances.

That historic Wednesday evening at Stamford Bridge ensured Newcastle finished above The Blues in the table which secured an unforgettable fifth-place finish and it still remains The Magpies’ only win over Chelsea in 27 league meetings.

Newcastle United vs Arsenal: Classic Encounters a day ago

"I felt that individual mistakes cost us today": The Key Quotes from Eddie Howe's Post-Manchester City Press Conference 8 days ago

Newcastle United vs Leicester City preview: How to watch, kick-off time, team news, predicted line-ups and ones to watch a month ago

The Warm Down: Magpies beat toothless Wolves to earn 250th Premier League victory at St James' Park a month ago 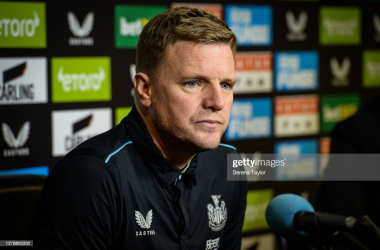