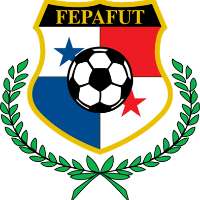 11:16 PMa year ago
We thank you for joining VAVEL this evening!

With a solid exhibition, Mexico defeats Panama by 3-0 in their own turf. Panama had some chances, but was not capable to finish them.
11:02 PMa year ago

Two minutes of added time for the second half.
10:59 PMa year ago

Macías comes in to replace Jiménez.
10:58 PMa year ago

Yellow card for Cooper for a foul on midfield.
10:57 PMa year ago

This was Jiménez goal for the 3-0

Long ball for Antuna. Ariano pushes him from behind and Jiménez will have a chance to score.
10:50 PMa year ago

Pizarro is replaced by Orbelín Pineda.
10:49 PMa year ago

Arroyo finds himself clear inside the box, but his finish is bad and fails to find the goal.
10:48 PMa year ago

Cooper with his first attempt. It's wide from Ochoa's goal.
10:47 PMa year ago

Ayarza leaves his place for Armando Cooper.
10:46 PMa year ago

Arroyo makes a good run and shoots, but his ball is wide.
10:44 PMa year ago

Edson Álvarez quickly reacts to a cross from Jiménez to make it 2-0.
10:40 PMa year ago

Álvarado leaves the pitch, in comes Antuna.
10:39 PMa year ago

Arroyo comes on instead of Quintero.
10:36 PMa year ago

Good play down the middle from Mexico. The last pass is a little too long for Álvarado.
10:33 PMa year ago

Ayarza makes a run to reach a good ball, however Montes presence makes him difficult for him to shoot and the chance is wasted.
10:31 PMa year ago

Rodríguez is replaced by Waterman.
10:30 PMa year ago

Good pass from Rodríguez looking for Jiménez. Before he's able to shoot, the defender gets there.
10:26 PMa year ago

Cross from Gutiérrez headed by Montes over the bar.
10:21 PMa year ago

Ayarza is carded after fouling Rodríguez.
10:16 PMa year ago

Jiménez's celebration after putting Mexico in the lead.

With an early goal from Jiménez, Mexico are in front in their visit to Panama City.
9:58 PMa year ago

One minute of added time for the first half.
9:57 PMa year ago

From the corner kick, Jiménez heads it and Calderón once again saves Panama.
9:56 PMa year ago

Gutiérrez goes for goal from a free-kick, but Calderón uses his fists to deflect the ball.
9:53 PMa year ago

Roman Torres sees a yellow card for a strong foul.
9:49 PMa year ago

Yellow card for Jimenéz after a late challenge on the keeper.
9:45 PMa year ago

Álvarado strikes once more, but it's wide.
9:44 PMa year ago

Corner kick from Mexico. Lots of rebounds inside the box, but the ball is unable to find the back of the net.
9:38 PMa year ago

Torres attempts a shot to the near post. Ochoa is well-positioned to stop it.
9:33 PMa year ago

Escobar takes a free-kick and his strike goes over the bar.
9:32 PMa year ago

Álvarado cuts inside and sends a through ball for Jiménez. The striker hits on his first touch, but Calderón again does well to save!
9:29 PMa year ago

Good cross from Rodríguez headed by Jiménez, but Calderón dives to make a great save.
9:25 PMa year ago

Álvarado shoots above the bar
9:24 PMa year ago

Panama attempts to react with a good cross from Torres, but Montes intercepts before the ball reaches Bárcenas.
9:23 PMa year ago

Pizarro passes to Alvarado who then assists Jiménez. The Wolves striker finishes it to the far post.
9:19 PMa year ago

Another Panameninan shot contained by Ochoa.
9:17 PMa year ago

First real chance for Panama. Low cross from Quintero that finds Torres, but his shot is caught by Ochoa.
9:15 PMa year ago

Mexico with the first attempt to reach Panama's box, but Gallardo is caught offside.
9:13 PMa year ago

We're underway with Panama vs Mexico!
9:12 PMa year ago

A minute of silence

The crowd takes a minute of silence due to Jorge Vergara's passing. The Chivas owner died todat at age 64.
9:11 PMa year ago

Both teams will wear single-colored kits for tonight's match. The home team will wear the traditional red colours, while Mexico is using a black uniform.
9:07 PMa year ago
Both national anthems play as the opening ceremony for the match takes place!
8:58 PMa year ago 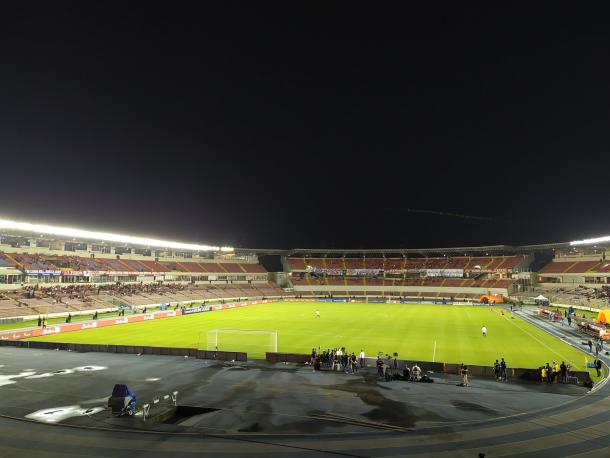 Both national teams are ready for the match as their finishing up their respective pre-match workouts!

8:45 PMa year ago
A small group of Mexican supporters made the trip to Panama City to support their team. They can bee seen in the background of this picture. 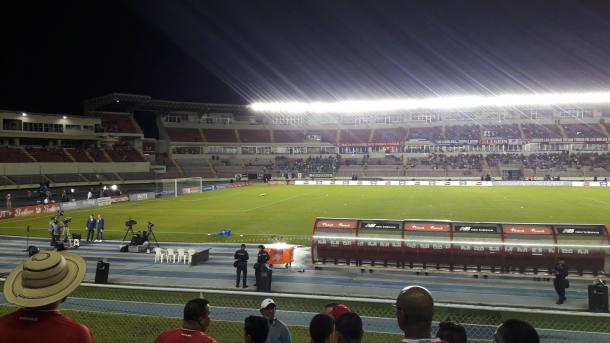 8:35 PMa year ago
The stands at Estadio Rommel Fernández are still to fill up when we're half-hour from kick-off. 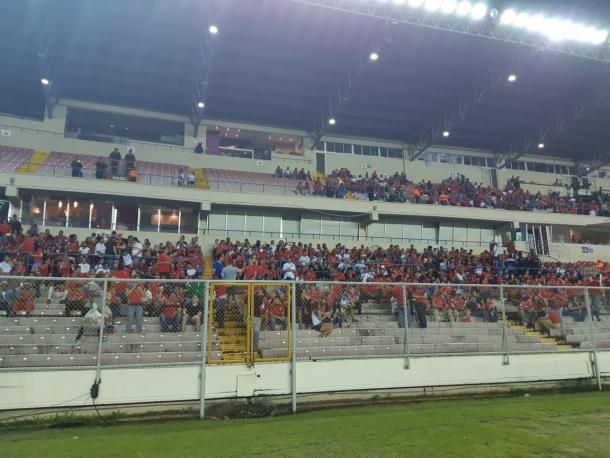 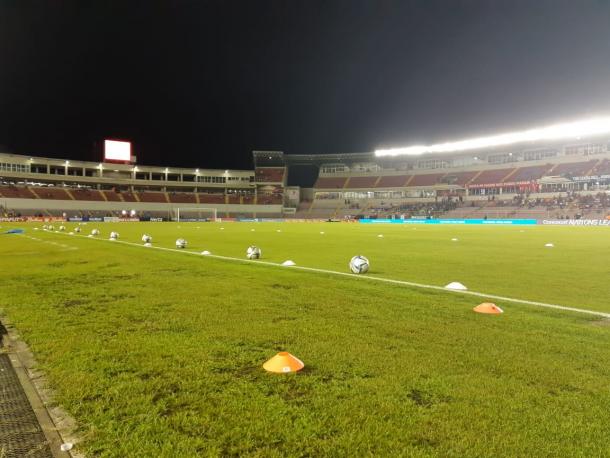 In the previous match for the Nations League, Mexico won by a 3-1 margin over Panama at Estadio Azteca.
8:13 PMa year ago 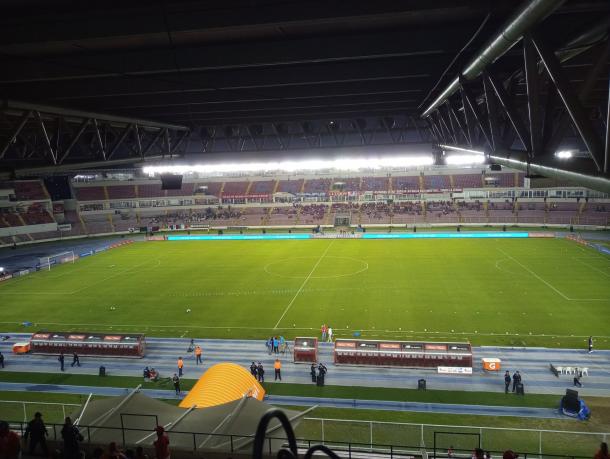 We're ready to bring you all actions LIVE from Estadio Rommel Fernández!

6:08 PMa year ago
Do not miss a detail of the match with the live updates and commentaries of VAVEL.

Follow along with us all the details, commentaries, analysis and lineups for this Panama vs Mexico match.

How to watch Panama vs Mexico Live TV and Stream

Raul Gudiño, Alan Mozo, Nestor Araujo, Carlos Salcedo, Cristian Calderón, Hector Herrera, Erick Aguirre, Carlos Rodríguez, Roberto Alvarado, Rodolfo Pizarro and Hirving Lozano.
6:05 PMa year ago
For this match, el 'Tri' will have a couple of casualties in his call, as Hiram Mier and Jonathan dos Santos, will miss this match by injury.
Both injured players were replaced by Chivas defender Gilberto Sepulveda and Rayados midfielder Carlos Rodriguez.
6:04 PMa year ago
"I don't underestimate the quality of the tournament, because Mexico will be able to play an infinite number of matches with its rivals and will be able to lose or win against them, which is not going to help Mexico continue to evolve," said Mexico Coach Gerardo Martino.
6:03 PMa year ago

Meanwhile, Panama arrive at this match in second place in Group B, as a result of a victory and a defeat, whereby, if they manage to get three points tonight against the Aztecas, they would give pure oxygen to aspire to qualify for the final round.
6:02 PMa year ago

The team coached by Gerardo 'Tata' Martino reaches this match with six points, as a result of two victories in their two games currently played in this tournament.
6:01 PMa year ago
One more FIFA date begins this weekend, and it will mark a new day in the League of Nations of CONCACAF, where Mexico will seek to continue with a perfect mark in the Group B, where it is positioned as leader.
6:00 PMa year ago

The Panama vs Mexico match will be played at the Estadio Rommel Fernández Gutiérre, in Panama. The kick-off is scheduled at 9pm ET.
5:59 PMa year ago
Welcome to VAVEL.com’s LIVE coverage of the 2019 Nations League match: Panama vs Mexico!