The opening day defeat to Tottenham Hotspur and last weekend's 0-0 draw at home to Southampton mean Pep Guardiola's men already have a little catching up to do in the Premier League title race.

Beat Thomas Tuchel's Chelsea, however, and there's the slight possibility that Manchester City could finish the weekend level on points at the summit.

The 1-1 draw with Liverpool at Anfield is the only blotch on an otherwise perfect first five games for the boys from South London and, given Reece James was shown a red card for handball on the goalline, the Blues will definitely have been happy with a point.

Two comfortable wins - 3-0 against Crystal Palace and 2-0 at Arsenal - preceded the feisty encounter on Merseyside, with Romelu Lukaku bagging on his return to English football at the Emirates. The lethal Belgian then smashed in two at home to Aston Villa before Tuchel's men beat Spurs by the same scoreline last weekend.

Chelsea are unbeaten in all competitions so far this season, having progressed to the last 16 of the Carabao Cup and opening their UEFA Champions League campaign with a straight forward 1-0 victory against Zenit St. Petersburg.

Pep's stars lost to Tottenham on the opening weekend, but have been seriously impressive ever since.

The 5-0 demolitions of Norwich City and Arsenal saw City's points and goal difference totals soar, before revenge for the 1-0 defeat to Leicester City in the Community Shield, winning by the same scoreline at the King Power courtesy of Bernardo Silva's solitary strike.

After scoring 10 goals in their first two home games of the Premier League season, City then participated in a Champions League classic, beating RB Leipzig 6-3 in a truly tremendous match. It was therefore extremely surprising to see Southampton walk away from the Etihad with a point after 0-0 stalemate which they perhaps would have won if Kyle Walker's red card for fouling Adam Armstrong in the area wasn't overturned by the officials. A true heartbreaker for Fantasy Premier Leagues players across the land.

City were back to their clinical best in midweek, though, beating Wycombe Wanderers 6-1.

Chelsea are hopeful Christian Pulisic and Edouard Mendy will be available for the weekend.

Both players are recovering from recent knocks and have not featured in the last few matches. "I think for Christian the game against Aston Villa maybe a bit too close," said Tuchel.

Timo Werner scored the Blues' normal-time goal in their Carabao Cup victory over Aston Villa on penalties in midweek, but picked up a knee injury late in the game, and could miss out.

The Champions have a number of injury doubts ahead of the game.

Defenders Aymeric Laporte and John Stones were both injured on international duty - Spain and England respectively - and are unlikely to feature against Chelsea this weekend.

Oleksandr Zinchenko is another doubt, while Ilkay Gundogan will be assessed later this week.

The two giants clashed four times last season, and it's not pretty reading for the Champions.

Remarkably, we had to wait until January 3rd to see the first meeting. City won at a canter at Stamford Bridge in what was one of the final nails in Frank Lampard's coffin. Pep's men were 3-0 up inside 34 minutes and Roman Abramovich clearly wasn't happy with how far behind the title race his side were - despite Callum Hudson-Odoi's late consolation.

In came Tuchel, and Chelsea's against City fortunes turned. In fact, the German has won all three matches against Pep Guardiola in 2021 so far.

The first encounter was a high-pressure occasion; the FA Cup semi final. It was a tight match, but not cagey, as the Londoners progressed to the final thanks to Hakim Zyech's 55th minute goal.

The one-goal margin of victory continued through the other two meetings. Chelsea travelled north to Manchester to take all three points with a 2-1 victory, one which maybe should not have been; Sergio Agüero stepped up to take a penalty with City 1-0 up but decided to go for the panenka which, well, didn't work in the slightest and Chelsea came from behind to take the win through Marcus Alonso's stoppage time winner.

Then came the big one. The one thing City have never tasted under Pep; European glory. The Champions League final is the ultimate showdown in club football and Guardiola decided to start the game with no defensive midfielder. This proved to be a fatal mistake as Mason Mount played a 30-40 yard ball the centre of City's formation to find Kai Havertz. The German playmaker rounded Ederson and slotted the ball home with ease to give Chelsea the greatest prize in club football for just the second time in their history, meaning the wait goes on for the Cityzens.

He's a steam strain. With enough power to beat the strongest centre-half, the big Belgian has proven himself to be one of the world's greatest strikers since leaving Manchester United in 2019. With three goals in as many Premier League appearances this season, he'll be more than a handful for City's defence.

This second Belgian has been talked about as the best midfielder on the planet for years. Kevin de Bruyne is one of the most enjoyable players to watch. With the ability to pick a pass from anywhere - literally anywhere - and a rocket in his back pocket, KDB is the first name on the teamsheet. Oh yes, and he has a history of scoring stunning goals against his former employer. Let's just hope he's fit to start the game.

The game will be shown live on BT Sport in the UK, with kick off at 12:30 BST on Saturday afternoon.

Manchester City: Who could the Citizens face in the UEFA Champions League Round of 16? 8 days ago

Is Kyle Walker the key to Joao Cancelo's Stunning Form? 11 days ago

Manchester City vs Everton preview: How to watch, kick-off time, team news, predicted lineups and ones to watch 12 days ago 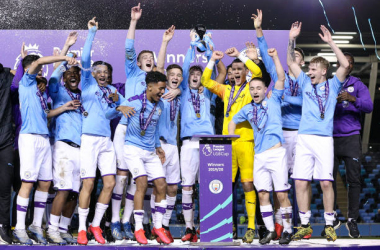 Manchester City: Loanee Citizens to keep an eye on a day ago

Manchester United vs Manchester City preview: How to watch, kick-off time, team news, predicted lineups and ones to watch a month ago
//