After going through a heart surgery last year, the wait wasn't worth it for Shareef O'Neal, who has announced that he'll be leaving UCLA this coming year.

Shaq's oldest son has made a name for himself in Southern California. 'Reef' was a 4-star recruit coming out of high school but still couldn't develop all his potential with the Bruins.

The athletic center has seen limited minutes this season, averaging 10 minutes per game. As a second unit player, Shareef is averaging 2.2 points and 2.9 rebounds per game.

Since he is a sophomore he was expected not to see a lot of action on the floor, but after missing his fifth game this season because of Coach's Decision, Shareef decided it was time to leave Westwood.

“My parents have always taught me that transparency is the best form of communication. It is in this spirit that I announced today my departure from the University of California Los Angeles.” O’Neal wrote on Twitter.

O’Neal thanked coaches Steve Alford and Mick Cronin as well as the UCLA medical staff that diagnosed and treated the heart defect that forced him to sit out all of last season.

“A part of my heart will always be at UCLA figuratively and literally,” O’Neal wrote. “I’m looking forward to the next chapter, wherever that may be.” 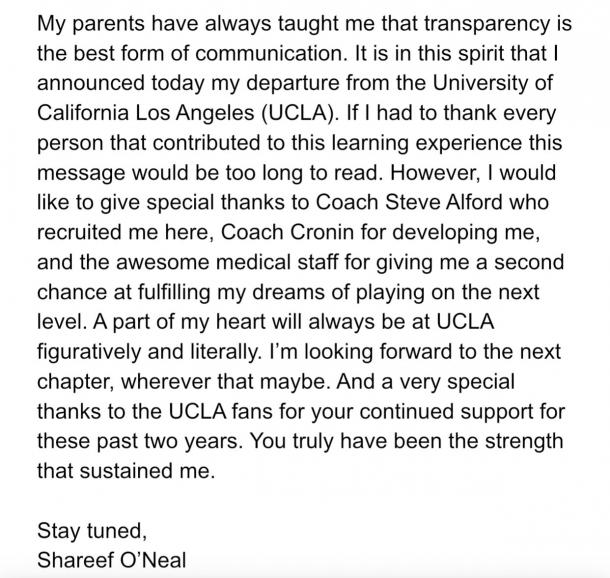 Green Joins Coach Woodson's Staff at Indiana a month ago

2021 NCAA Tournament: Florida gets past Virginia Tech in overtime 3 months ago