Thank you for following our coverage of Watford vs Leeds United on VAVEL, matchday 32 of the Premier League 2021-22. Keep visiting the VAVEL site to keep up to date with everything that happens during the day in the sporting world.
11:52 AMa month ago

Leeds United beat Watford 3-0 to extend their unbeaten streak and move further away from the relegation zone.

Last minutes of the game, Leeds United are within a whisker of another win over Watford
11:32 AMa month ago

Attempt missed. Ismaïla Sarr (Watford) right footed shot from the centre of the box is high and wide to the right. Assisted by João Pedro.
11:17 AMa month ago

Imrân Louza (Watford) is shown the yellow card for a bad foul.
11:12 AMa month ago

The second half begins between Watford and Leeds United, the visiting team is up by the minimum difference.
10:49 AMa month ago

The first half ends, Watford is down by the minimum difference against Leeds United.
10:34 AMa month ago

Attempt missed. Juraj Kucka (Watford) right footed shot from the right side of the box is too high following a set piece situation.
10:29 AMa month ago

This is how Raphinha sent the ball into the back of the net after a left-footed shot.

Attempt missed. Imrân Louza (Watford) left footed shot from outside the box from a direct free kick.
10:13 AMa month ago

Attempt missed. Luke Ayling (Leeds United) header from the centre of the box is high and wide to the left. Assisted by Stuart Dallas with a cross following a corner.
10:10 AMa month ago

Attempt missed. Luke Ayling (Leeds United) right footed shot from the left side of the box.
10:08 AMa month ago

Watford hosts Leeds United at Vicarage Road in the continuation of the 32nd Premier League matchday action.
9:46 AMa month ago

In a couple of minutes we will start with the broadcast of Watford FC vs Leeds United from Vicarage Road, matchday 32 of the Premier League.
9:44 AMa month ago

On the other hand, Leeds United have gone from strength to strength in the last three matchdays, taking 7 points out of a possible 9, which have helped them to climb up the table and move away from the relegation zone for now: 2-1 with Norwich, 3-2 with Wolverhampton and 1-1 with Southampton. Thanks to this performance, Marsh's pupils strengthened their position in the standings, moving away from the relegation zone by six points.
9:21 AMa month ago 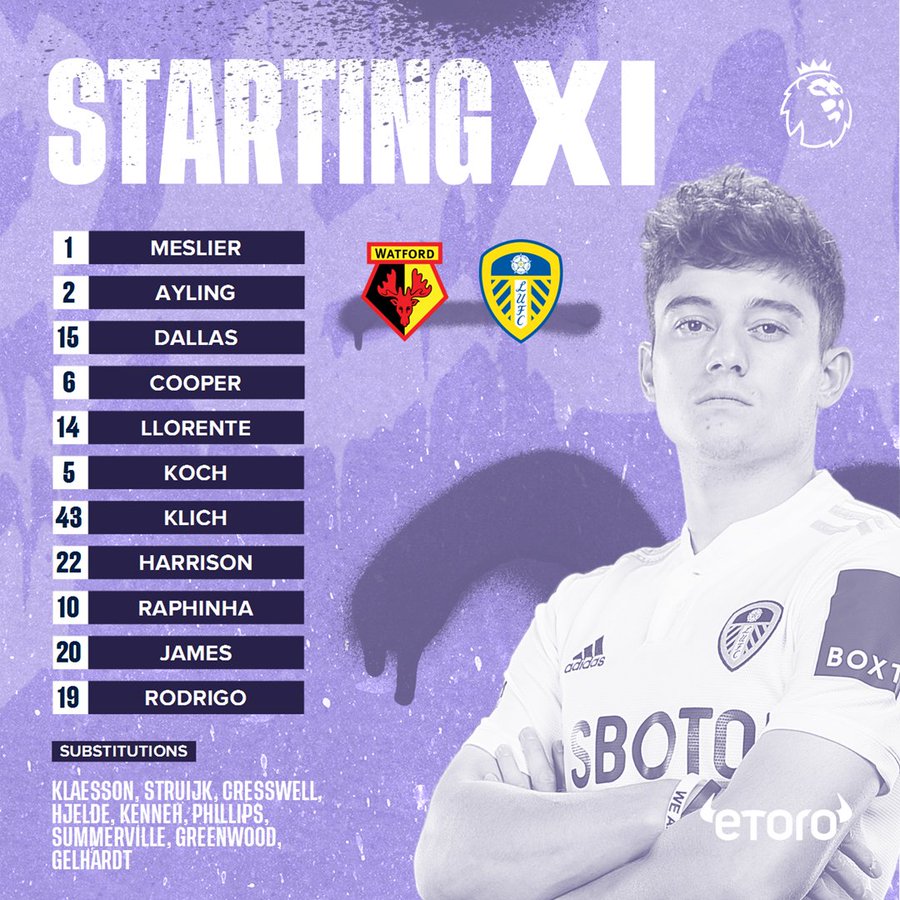 As of today, Watford is one of the contenders for relegation to the Championship. After playing 30 matches, the Hornets only got points out of 22, and are currently in the penultimate place in the standings. The situation is not critical as 17th place has only 3 points more than them, however, they still need to be able to win and not keep losing points as it could cost them dearly with only 6 games left in the season.
9:12 AMa month ago 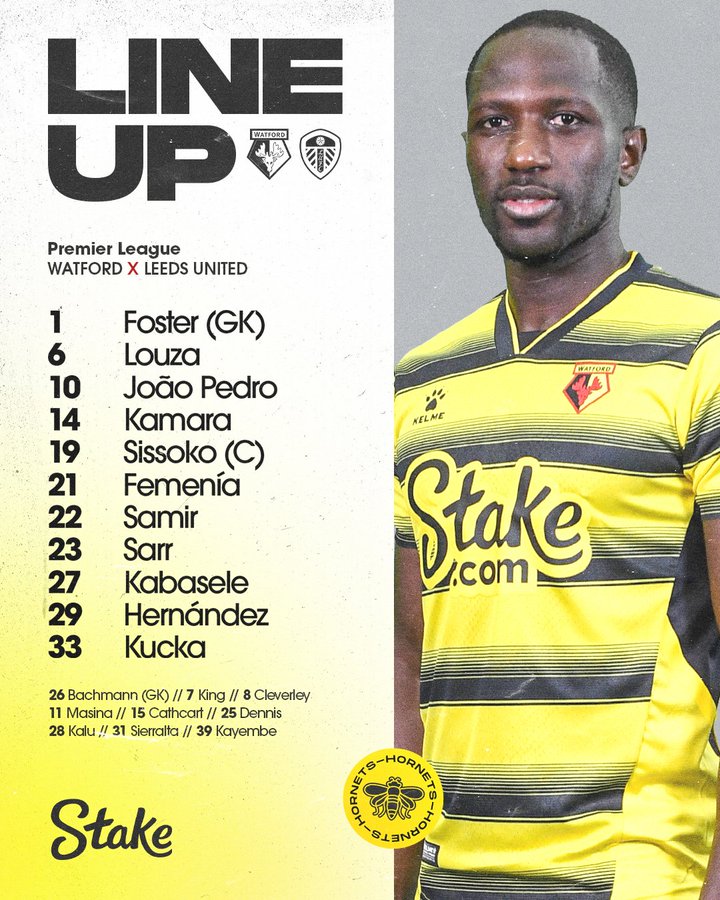 Their most recent encounter dates back to the previous year of the current season, in that match it was Leeds United (when they were coached by Marcelo Bielsa) who won by the minimum difference at home. Now, they will look to achieve the same score, however, Watford will not let them have it so easy as they will defend their home with tooth and nail.
9:05 AMa month ago

The wait is over in England, the Premier League is back in full action with the match between Watford and Leeds United at Vucarage Road. Both teams are at the bottom of the table and will fight to get three golden points and continue climbing positions at the end of the season.
8:13 PMa month ago

Do not miss a detail of the match with the live updates and commentaries of VAVEL. Follow along with us all the details, commentaries, analysis and lineups for this Watford vs Leeds United match.
8:08 PMa month ago

What time is Watford vs Leeds United match for Premier League?

This is the start time of the game Watford vs Leeds United of 9th April in several countries:

Watch out for this Leeds United player:

He is one of the most unbalanced players that Marcelo Bielsa has in the Leeds United squad, Raphinha will be the player to watch for this match. Currently, the Brazilian has 3,183 minutes played with the Leeds jersey which is distributed in 40 games played, 11 goals scored, 9 assists and 6 yellow cards. Raphinha could tip the balance in favor of Leeds at any time and give a blow of authority at home. 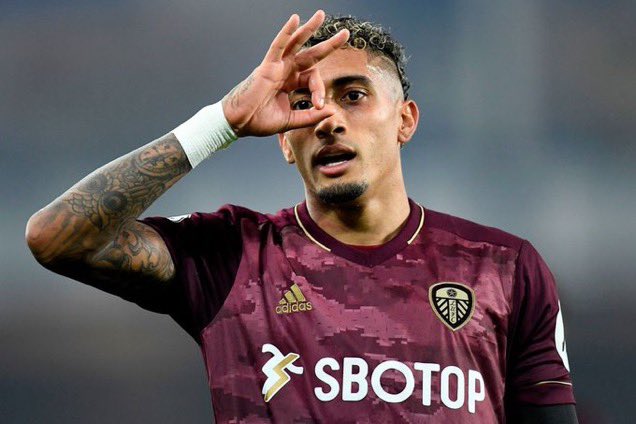 Moussa Sissoko has become a fundamental piece of Watford's midfield, the Frenchman has played 1,601 minutes in the campaign and assisted on one occasion, he also has 3 yellow cards and in most of the matches he has stood out for being the captain of the team. For this match, Sissoko will have to be more than that because they have to get the three points if they want to get out of the relegation zone. 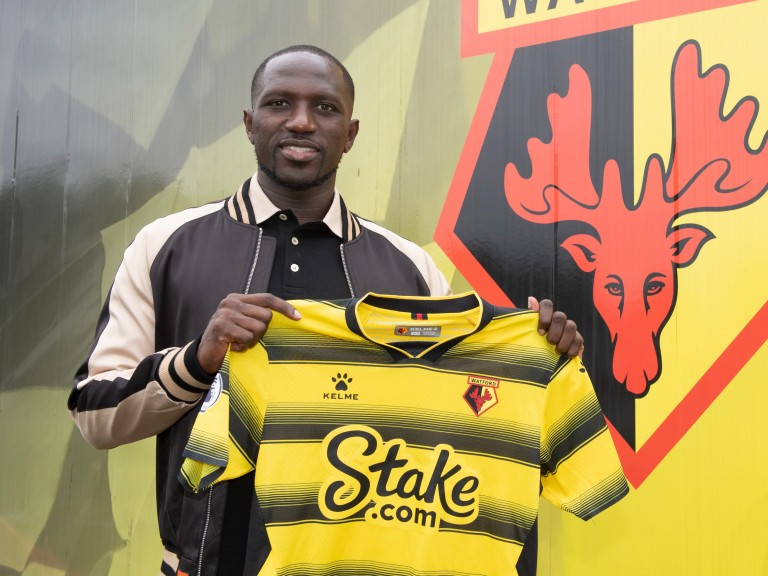 Watford and Leeds United have met on a total of 26 occasions (11 wins for Watford, 6 draws and 9 wins for Leeds) where the balance is slightly in favor of the Watford side. In terms of goals, both teams usually score against each other, with Watford scoring 46 goals and Leeds United 31. Their last meeting dates back to matchday 7 of the current campaign where Leeds beat Watford by the minimum.
7:38 PMa month ago

Vicarage Road, a soccer stadium located in Watford (Hertfordshire, England), which hosts the home soccer matches of Watford F.C. of the Premier League. Its current capacity can accommodate 21,577 fans.

The first game under floodlights at Vicarage Road was played in 1953, when the lights were installed above the Main Stand. These were replaced in 1960, with four pylons being built at the corners of the ground. Currently the floodlights are mounted on top of the Vicarage Road and Rookery Positions.

On the other hand, Leeds United comes into this match positioned out of the Premier League relegation zone, however, the pressure remains strong on the team since after being left without Marcelo Bielsa at the helm, Leeds is sailing in mysterious waters in the hope of reaching the goal of being saved from relegation. Currently, they are in 16th place overall with 30 points that have been the product of 7 wins, 9 draws and 15 defeats, also, in the statistics they average 35 goals for and 68 against, a situation that leaves them with a difference of -33 goals.
7:28 PMa month ago

To be respected at home

Watford will have to get their act together for the end of the season as they are at risk of finishing in the last places of the general table, so if so, the Golden boys would be back in the English Silver League. They are currently in 18th place with 22 points from 6 wins, 4 draws and 20 defeats so far this season. Likewise, in the statistics, they average a total of 29 goals for and 57 against, a situation that leaves them with a -28 goal difference in their position.
7:23 PMa month ago

The 2021-22 season is beginning to reach the final round in England, the overall table is beginning to tighten with the closing of the championship, with it, the drama of relegation begins to take shape in the last teams in the table. For Watford and Leeds United it is essential to start having a good close where they take advantage of all the remaining games to get points because a defeat could cost them dearly with the relegation to the Football League Championship.
7:18 PMa month ago

The Watford vs Leeds United match will be played at Vicarage Road, in Watford, England. The kick-off is scheduled at 10:00 pm ET.
7:13 PMa month ago

Welcome to VAVEL.com’s LIVE coverage of the 2022 Premier League: Watford vs Leeds United!

Seattle Sounders vs Minnesota United preview: How to watch, team news, predicted lineups, kickoff time and ones to watch 2 hours ago

NYCFC 2-0 Columbus Crew: Boys In Blue cap unbeaten homestand with victory in the Bronx 2 hours ago
//