The Patriot League tournament begins Tuesday with a pair of first round games. Led by regular season champion Bucknell, the remaining six teams begin play on Thursday with the quarterfinals.

Where: All games are held at the home court of the higher seed.

The class of the league is by far Bucknell (15-3, 23-8). Led by Patriot League Player of the Year and Defensive Player of the Year Nana Foulland, the Bison rolled through the conference in emphatic fashion. Foulland finished eighth in the League in scoring (14.8 ppg), second in rebounding (7.9 rpg) and a League-leading 1.9 blocks per game for the regular-season champions.

Junior Zach Thomas is the lone player to finish in the top-10 in the League in scoring (3rd, 15.9 ppg), rebounding (6th, 6.6 rpg) and assists (10th, 3.3 apg), while also finishing fourth in the League in 3-point field goal percentage (.423), forming a devastating one-two punch for head coach Nathan Davis, named Patriot League Coach of the Year for a second consecutive season.

Lehigh's challenge is led by two-time Patriot League Player of the Year Tim Kempton. The senior is the leading scorer (20.0 ppg) and rebounder (10.1 rpg) in the league, one of two players in the nation to average a double-double. Assisted by junior guard Kahron Ross (10.3 ppg, 5.4 apg), the Mountain Hawks handed Bucknell two of their three conference losses. 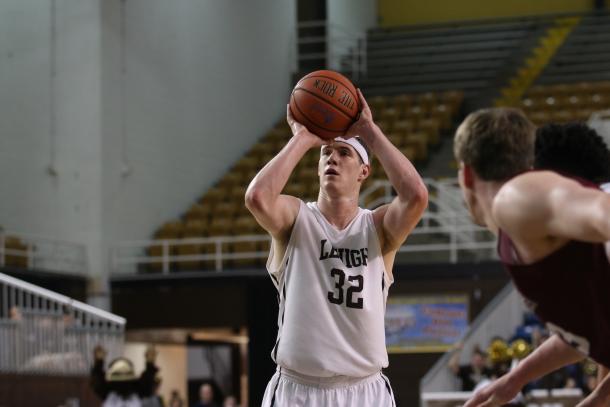 Defending champions Holy Cross (9-9, 15-16) are fifth and one year after their Cinderella run through the Patriot League tournament as the ninth seed, 2016 tournament MVP Malachi Alexander (13.5 ppg, 5.1 rpg) is back to lead the Crusaders' charge in his final season.

Colgate (8-10, 10-21) are sixth and their hopes rest on Will Rayman (14.4 ppg, 4.5 rpg), the Patriot League Rookie of the Year. Rayman broke Adonal Foyle's single-game freshman scoring record with 34 points against Lafayette and is the fourth Raider to earn the ROY award.

Loyola-MD (8-10, 14-15) lost the tiebreaker to Colgate for the final first-round bye and were awarded the seventh seed. Junior guard Andre Walker (15.0 ppg, 3.9 rpg) and senior forward Jarrod Jones (15.1 ppg, 6.4 rpg, 1.2 bpg) hope to lead the Greyhounds to their first NCAA Tournament since 2012 and first as a member of the Patriot League.

One year after finishing fourth and reaching the semifinals, Army (6-12, 12-18) slipped to eighth. Tommy Funk was named to the all-freshman team while finishing fifth in the league in assists (4.5). The Black Knights could face Bucknell in the quarterfinals.

Who will go dancing?

We've seen this before with Bucknell. The Bison have won the regular season title in five of the last six seasons (including this year), but have only reached the NCAA Tournament twice in that span. They have a habit of choking before reaching the conference championship game and although they look like they will make it that far this time around, Lehigh is the pick to win the tournament simply because Kempton is a dominant player, able to go toe-to-toe with Foulland in the paint and the Mountain Hawks have that aforementioned sweep over the Bison.

Prediction: Lehigh wins at Bucknell in the final.