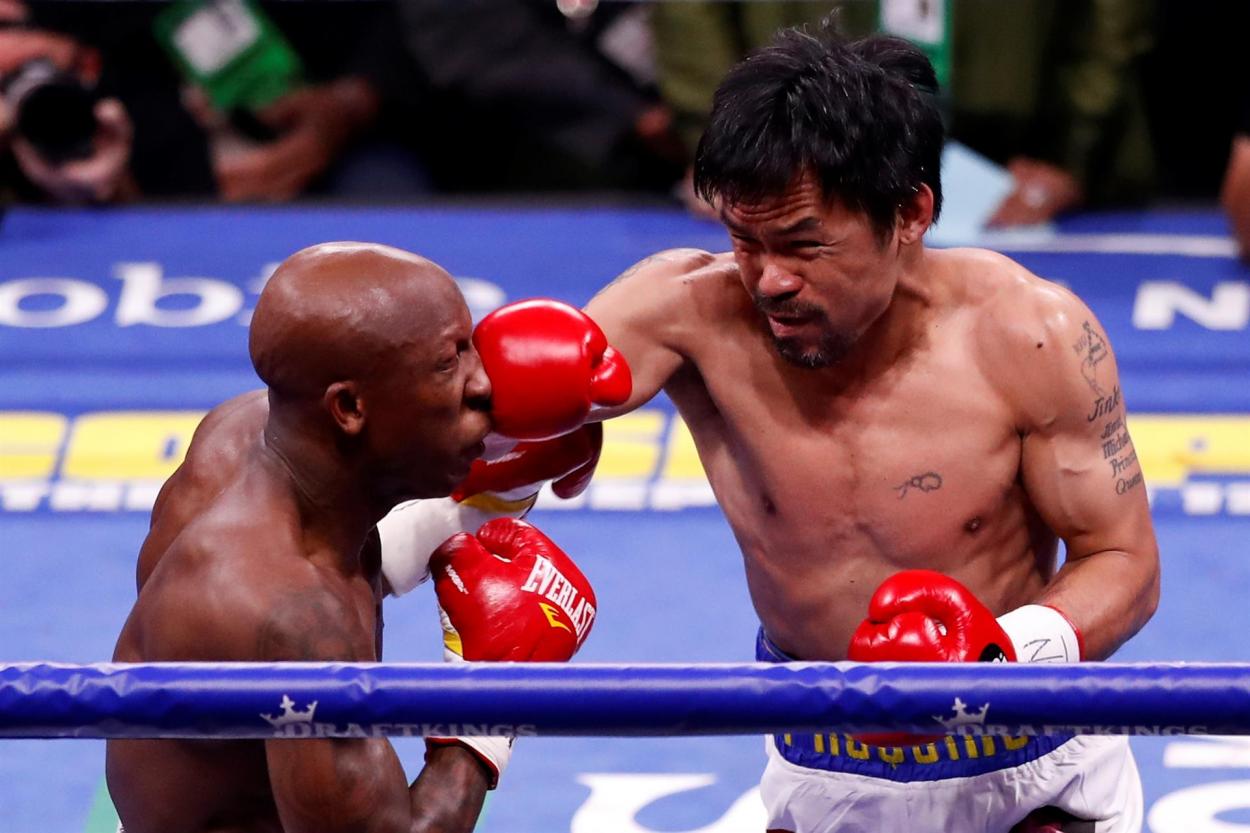 Keep your belt on!

Yordenis Ugas continues to preserve his WBA Welterweight belt against boxing legend Manny Pacquiao in what could be the Filipino's last fight.
1:02 AMa month ago

Ugas gets the left-handed upper and together with 'Manny' put on a great closing show. The Filipino neglected his guard and allowed several right rights in this last episode.
12:59 AMa month ago

It seems that Ugas begins to tighten and balances the fight in his favor. Yordenis has managed to manage the right-handed punch and everything will be defined in the last episode.
12:53 AMa month ago

The bell rings in the tenth episode. Pacquiao suffers the missile that Ugas has by right hand and although the Filipino connects in the face of the Cuban, he suffers the last minute and ends up on the ropes.
12:50 AMa month ago

At the end of the ninth round, Manny seems to recover and is forceful in volume of punches. Ugas presents some visible injuries in the right eyebrow.
12:45 AMa month ago

Ugas connects with an overhand right to the Filipino, however, the Cuban ends up with a cut on his eyebrow. The fight is not leaning for any fighter so far.
12:42 AMa month ago

Yordanis Ugas lands a left jab that crests Pacquiao's face. Ugas takes the lead in this episode
12:37 AMa month ago

The fight heats up! The fight becomes extremely even in the sixth round. Pacaquiao tries to pin Ugas against the ropes but the Cuban is agile with his right hand.
12:33 AMa month ago

Ugas' venomous forehand but the 'Pacman' does not want to leave anything to chance and does not abandon the attack. Yordenis Ugas takes extraordinary care of his defense.
12:30 AMa month ago

Ugas manages several effective combinations but is deducted a point for hitting below the shortstop. The Cuban suffers a slip in the last third of the episode. 28-38 for the pugilists
12:24 AMa month ago

Pacquiao hits Ugas with a right hand but Yordanis connects with the Filipino's face in the last seconds of the third episode.
12:20 AMa month ago

Pacquiao starts by proposing the fight in front and puts Ugas against the ropes but with an effective combination, Ugas makes 'Pacman' slip on the canvas.
12:12 AMa month ago

The first episode starts between the Cuban and the Filipino in what could be their retirement fight.
12:08 AMa month ago

The protagonists come out

Ugas appears in the ring in a special white furry robe, while Manny appears in his shiny red robe.
12:01 AMa month ago

The Cuban anthem does not play

The programming of the ceremony did not include the hymn of Yordenis Ugas.
11:58 PMa month ago

The stellar duel gets underway

The anthem of the Philippines is already playing, followed by the anthems of the USA and Cuba to continue with the presentation of the pugilists.
11:50 PMa month ago

The duel between Guerrero and Ortiz ends in the tenth episode agreed. Robert Guerrero wins it by unanimous decision.
11:21 PMa month ago

The fighters face each other in a Welterweight duel, Guerrero has a streak of 20 K.O.'s against Ortiz with 25.
10:58 PMa month ago

Manny' Pacquiao stated that he asked his manager to face Mexican Juan Manuel Marquez one more time, however, Marquez withdrew earlier than planned.
10:52 PMa month ago

Mexican on the billboard

Mexican Angel Contreras in the second fight of the evening that awaits the fight between Pacquiao and Ugas. The Mexican defeated John Dato by unanimous decision, leaving him undefeated.
10:32 PMa month ago

The fight has heated up

Ugas warmed up the fight with these statements thanking Errol Spence Jr, who was going to be the final challenger to 'Manny' "It's been 4 years of rivalry (with Spence) and finally this year we were going to fight. Pacquiao came back and ruined the fight, but I was happy for you, because I'm sure you were going to win and take the name of a great legend. I have been a quiet a big fan of yours and I have seen with joy how you have become a big star" declared the Cuban.
10:22 PMa month ago

Soon will begin the duel between Frank Martin vs.

Carlos Castro wins by knockout over Escandón in the final round of the WBC Americas continental featherweight title fight against Óscar Escandón.
10:12 PMa month ago

We are three prelims away from the Pacquiao vs. Ugas deluxe bout, stay tuned and know the results of these battles
10:07 PMa month ago 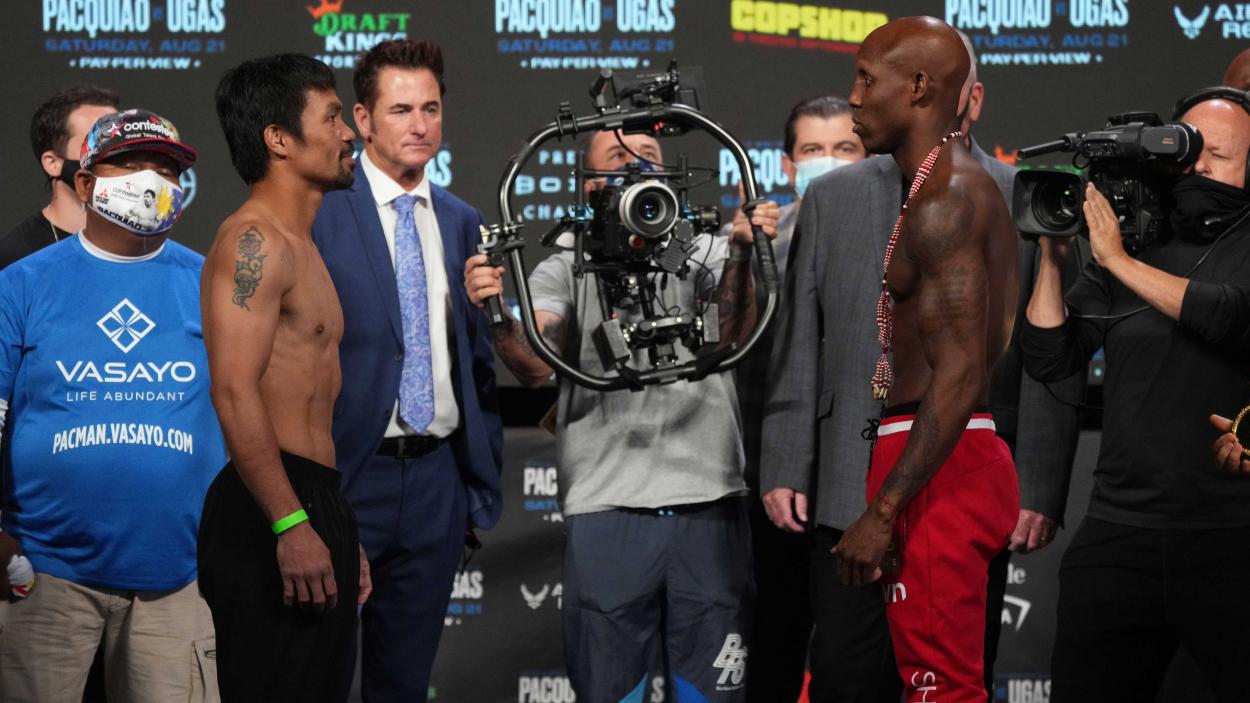 Do not miss a detail of the match Pacquiao vs Ugas live updates and commentaries of VAVEL.
9:57 PMa month ago

How to watch Pacquiao vs Ugas Live Stream on TV and Online?

If you want to watch the fight Pacquiao vs Ugas live on TV, your options is: ESPN.

What time is Pacquiao vs Ugas match for Boxing 2021?

This is the start time of the game Pacquiao vs Ugas of 21st August 2021 in several countries:

Bookmakers are leaning towards the experienced Pacquiao, even though the Filipino is seven years older than his opponent. The odds are estimated at -350 for Pacquiao vs +250 for Ugas.
9:42 PMa month ago

It is estimated that the Filipino could pocket 25 million dollars in this fight.
9:37 PMa month ago

The Filipino had his last fight in which he won by split decision over Keith Thurman on July 19, 2019, while Ugas had it on July 20, 19 against Omar Jr Figueroa over 12 rounds, Ugas emerged victorious after 12 episodes by score.
9:32 PMa month ago

This fight was not scheduled as it will take place, in principle, 'Pacman' would hold the fight against Errol Spencer Jr, however, a back injury left him out of the fight. Ugas who was designated for the co-main event decided to be the challenger for Pacquiao.
9:27 PMa month ago

The pavilion was inaugurated at a concert by The Killers, Shamir and Wayne Newton on April 6, 2016. Nicki Minaj and Ariana Grande6 performed on April 7. Guns N' Roses performed on April 8 and 9. A Harlem Globetrotters basketball show was held on the 19th.

On May 7 it hosted a boxing match between Saul Alvarez and Amir Khan. On May 22 it served as the stage for the 2016 Billboard Music Award show. On June 5, the finals of the Miss USA 2016 pageant were held. On June 19, the WWE Money in the Bank wrestling show will be held, and on July 9 it will host the mixed martial arts event, UFC 200.7 On August 20, the UFC 202 mixed martial arts bout was held. On October 7 and 8, the Los Angeles Kings played National Hockey League ice hockey games against the Dallas Stars and Colorado Avalanche. In November, the finals of the Professional Bull Riders bull rodeo circuit will be played. On November 17, the Latin Grammy Awards were held. On December 30, the UFC 207 fight was held.

In 2017, the arena hosted Cirque du Soleil from January 18 to 22. On February 13, it hosted WWE Monday Night Raw. From March 8 to 11, it hosted the Pac-12 Conference men's basketball championship. On May 21, it hosted the Billboard Music Awards. On June 21, it hosted the NHL draft and awards ceremony. It also hosted boxing matches; Floyd Mayweather Jr. vs. Conor McGregor and Gennady Golovkin vs. Canelo Alvarez, and the mixed martial arts bouts of UFC 209, The Ultimate Fighter 25 and UFC 213. On October 8 it hosted an NBA basketball game between the Sacramento Kings and Los Angeles Lakers.

In 2018, the T-Mobile Arena hosted WWE's Elimination Chamber 2018.
This Saturday, August 21, it will host the fight between Pacquiao and Ugas for the Welterweight belt.

The welterweight belt had been won by Pacman in his last fight against Keith Thurman, but since he did not face any boxer, the belt was given precisely to the Cuban fighter who will have to expose it to ratify himself as the true holder.