THANK YOU VERY MUCH FOR JOINING US! 🏎

The race was spectacular and left us with great moments to remember. Lewis Hamilton reached his 100th victory and continues to write history in the premier class of world motorsport. Thank you very much for your attention and the next appointment is in Turkey.
10:33 AMa month ago

Final positions at the Russian GP 2021 ✔ 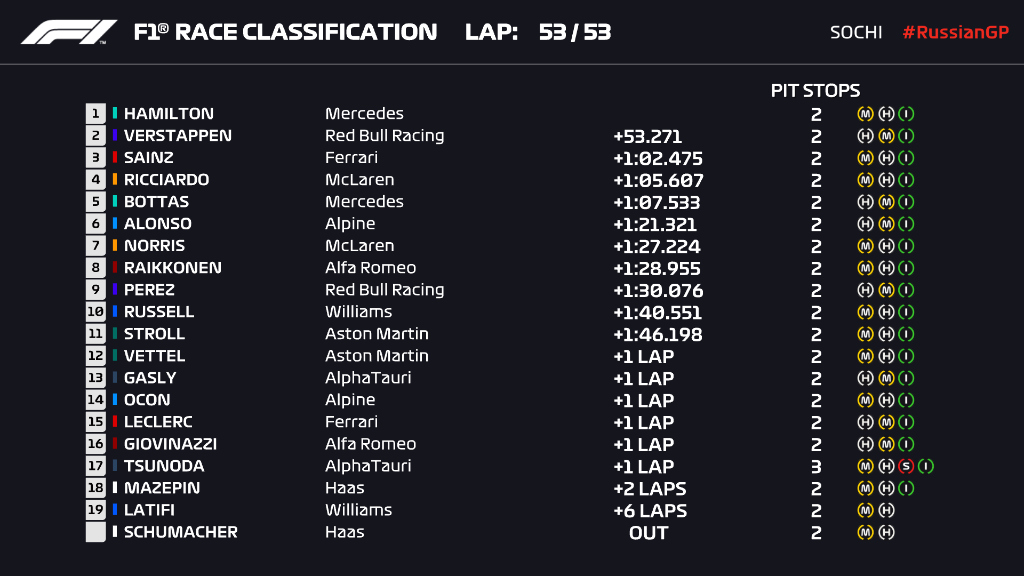 LEWIS HAMILTON IS THE WINNER OF THE 2021 RUSSIAN GRAND PRIX AND ACHIEVES HIS 100TH VICTORY IN THE CATEGORY.
9:36 AMa month ago

LEWIS HAMILTON IS GOING TO WIN HIS 100TH RACE IN FORMULA 1.

NORRIS RUNS OFF THE TRACK, THE WET ASPHALT TAKES ITS TOLL ON HIM AND HE IS PASSED BY HAMILTON, LEWIS HAMILTON IS THE ONLY LEADER OF THE RACE NOW.
9:32 AMa month ago

NORRIS HAS SLICK TIRES, WHILE HAMILTON ATTACKS HIM WITH HIS INTERMEDIATE RAIN TIRES.
9:30 AMa month ago

Lance Stroll and his Aston Martin run off the track at Turn 4 and hit the barrier
9:29 AMa month ago

INTERMEDIATE RAIN TIRES FOR HAMILTON AND MARKS A 2.7 SECOND STOP.

HAMILTON ENTERS THE PIT LANE, BUT DOES NOT CHANGE HIS TIRES.

RUSSELL ANNOUNCES THAT THERE ARE RAINDROPS AT TURN 10.

WITH TEN LAPS TO GO, HAMILTON IS 195 THOUSANDTHS FASTER THAN NORRIS AND IS CHASING HIM FOR THE TOP POSITION
9:16 AMa month ago

BRITISH BATTLE FOR FIRST PLACE IN RUSSIA. NORRIS SETS FASTEST LAP WITH A 1:37.423 AND HAMILTON CHASES HIM AT +1.875

Hamilton overtakes Leclerc for fourth position and the Ferrari driver takes advantage of the situation to pit.

The Haas team warns Mick Schumacher that he must pit and abandon the race. The German's car has problems and is the first DNF of the session.
9:01 AMa month ago

The fight for sixth place is defined between Gasly, Sainz, Ricciardo, Verstappen and Stroll.

All within two seconds of each other

Disappointing race for Valtteri Bottas since he entered the pits on lap 27, he did not manage to overtake Antonio Giovinazzi's Alfa Romeo and lost the possibility of DRS.
8:55 AMa month ago

Perez, Alonso and Leclerc dominate the first three positions. When they stop in the pits, the race leader will be Lando Norris.

Norris is +14 seconds behind Checo.

NORRIS PIT STOP, CHANGES MEDIUM TIRES FOR HARD TIRES WITH A TIME OF 2.9 SECONDS, WILL START IN FOURTH POSITION.
8:50 AMa month ago

All are under one second apart and can use the DRS.

Verstappen is hovering nine tenths behind Hamilton, suffers vibrations in his car and his pit crew prepares for the pit stop
8:44 AMa month ago

Daniel Ricciardo makes a bad stop and loses time in the pits, momentarily loses the podium.
8:42 AMa month ago

Incredibly, Verstappen is now hunting down the front runners!

He's got Alonso, Perez, Hamilton and Ricciardo all in his sights, with leader Norris a bit further up the road#RussianGP #F1 pic.twitter.com/Bcr6Yly0sF — Formula 1 (@F1) September 26, 2021

Hamilton stops in the pits and changes compound. The Briton looks strange, he still can't overtake the McLaren.
8:36 AMa month ago

Max Verstappen sets the fastest lap with a 1:40.178 and is now sixth in the race, although he has not yet pitted.
8:33 AMa month ago

The top three have not yet stopped and have medium tires.

George Russell makes a pit stop and defends himself from the undercut of Stroll and his Aston Martin.

LANDO NORRIS TRIES TO OVERTAKE CARLOS SAINZ, THE MCLAREN HAS MORE POWER, MEASURES HIM ON THE INSIDE AND SUCCEEDS

Lance Stroll is the first driver to pit, tries an undercut on Russell
8:25 AMa month ago

Lando Norris is trying to take advantage in the second sector, he tries to attack Sainz, but the Spaniard does not allow him to do so, SHUTTING HIM DOWN AND NOT LEAVING HIM SPACE.
8:22 AMa month ago

Verstappen gets all the power out of his Red Bull and now gets into 12th place.

Bad start for Tsunoda who is 19th

Charles Leclerc and his Ferrari made a great comeback, starting from 19th position and now in twelfth place.
8:13 AMa month ago

Cars take to the track and the preliminary lap begins
8:04 AMa month ago 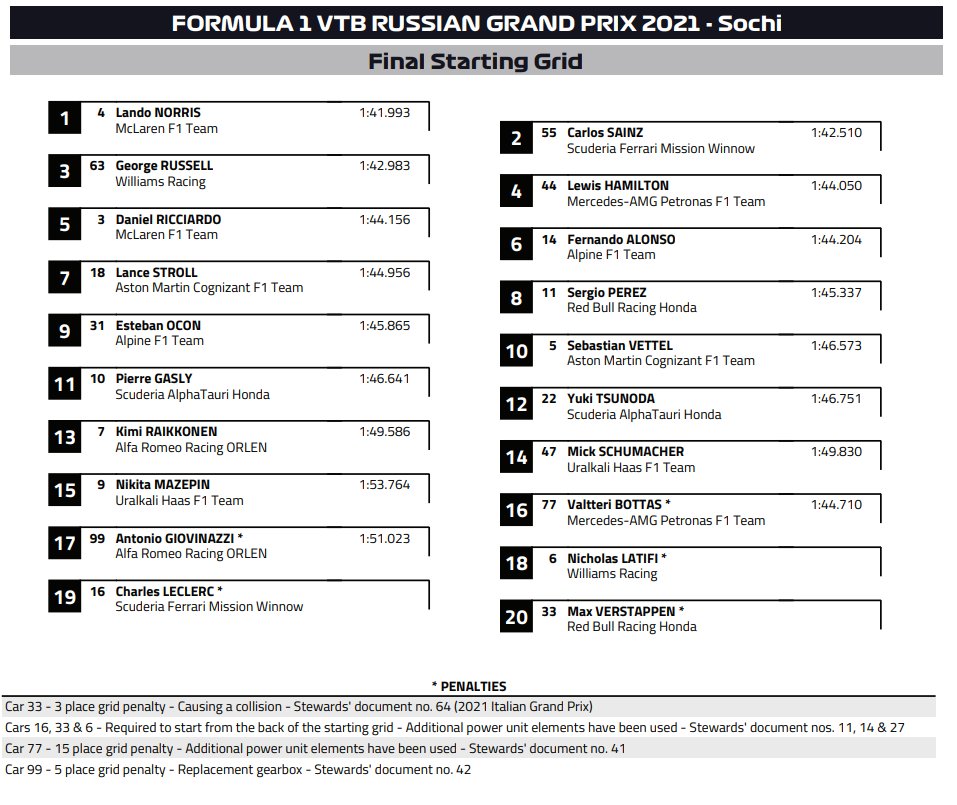 Max Verstappen and his Red Bull will start at the back of the grid due to a power unit change before the race
9:43 AMa month ago

Qualifying results of the Russian GP 2021 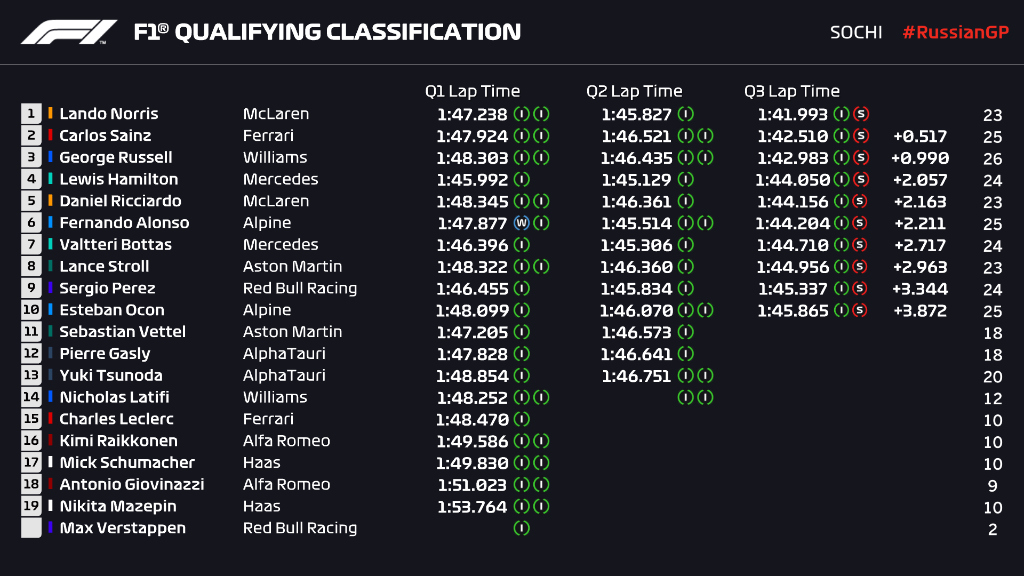 Ferrari, McLaren and Mercedes follow Williams' example and now change their drivers' tires for soft ones.

HAMILTON CRASHED AT THE PIT LANE ENTRY, BUT IT IS NOT SERIOUS

George Russell switches from intermediates to the fastest soft tires, Williams goes all out
8:53 AMa month ago

All drivers on track are using intermediate tires.
8:52 AMa month ago

Bottas is the fastest in the second sector. Mercedes is unrivaled in Russia
8:50 AMa month ago

The last phase of qualifying at the Russian GP is underway.
8:43 AMa month ago

Checo Perez continues to climb positions, now in fourth place behind Norris, who is seven thousandths of a second behind him.
8:39 AMa month ago

Despite having his second personal best sector, George Russell remains in the elimination zone +1.585 behind Ricciardo who is tenth.
8:35 AMa month ago

All drivers are using intermediate tires.
8:27 AMa month ago

The second round of qualifying gets underway, five more drivers will be eliminated and only 10 cars will remain to compete in Q3.
8:21 AMa month ago

Checo Perez is the fastest in Q1 so far and has a +0.482 advantage over Hamilton.

Yellow flag in the first sector

Verstappen (Did not record a time, as he will start last tomorrow)

Yellow flag in sector three after a spin by Antonio Giovinazzi's Alfa Romeo at turn 16.
8:06 AMa month ago

All drivers take to the track with intermediate tires, except Fernando Alonso, who uses the extreme rain tires.
8:02 AMa month ago

The Alpines are out, the Alpha Tauri are out and qualifying for the Russian GP begins despite a very wet track.
7:53 AMa month ago

Work on the track continues. It seems that there will be qualifying at the agreed time.

Lots of work going on ahead of the scheduled qualifying start in around 10 mins!#RussianGP #F1 pic.twitter.com/hlJmG25ujg — Formula 1 (@F1) September 25, 2021

Weather in Sochi with minutes to go for qualifying

If conditions do not improve, classification may be suspended.

Do not miss a detail of the qualifying GP Russian Formula 1 with the live updates and commentaries of VAVEL.com Follow along with us all the details, commentaries, analysis and standings.
1:30 AMa month ago

How to watch 2021 F1 Russian Grand Prix Live Stream on TV and Online?

If you want to watch the 2021 F1 Russian Grand Prix live on TV, your options is: ESPN and Star Action.

If you want to watch stream it: Star+ 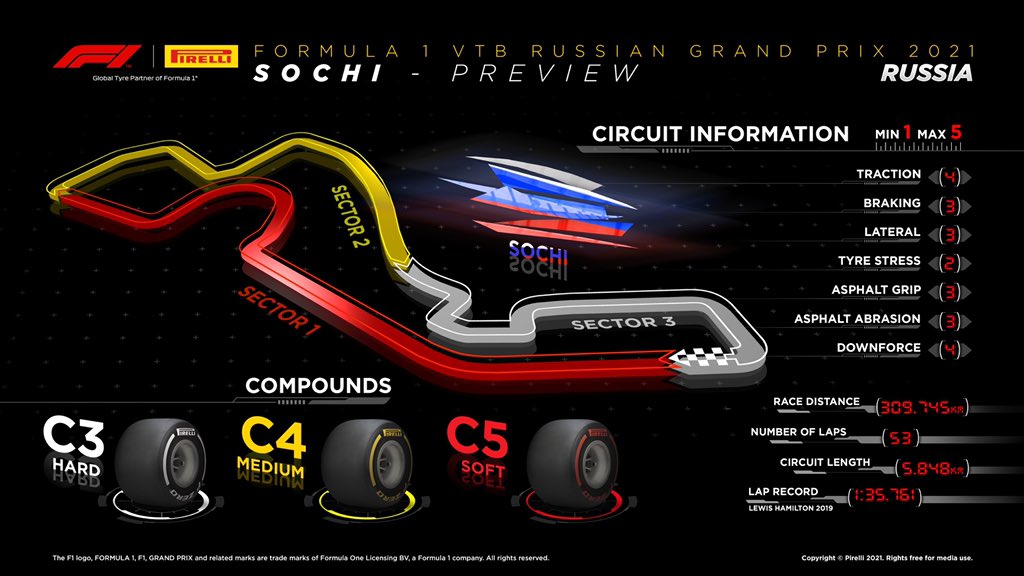 The winner of the last Russian Grand Prix

The winner of the last Russian Grand Prix was Valtteri Bottas in the 2020 season with his Mercedes. Indeed, the German team has dominated every race at the Sochi Autodrom since 2014.
1:10 AMa month ago

The stewards will pay special attention to turn 2 and the exit of turn 18 where the track limits will be located. The driver who exceeds these limits may be penalized in qualifying and in the race.
1:05 AMa month ago 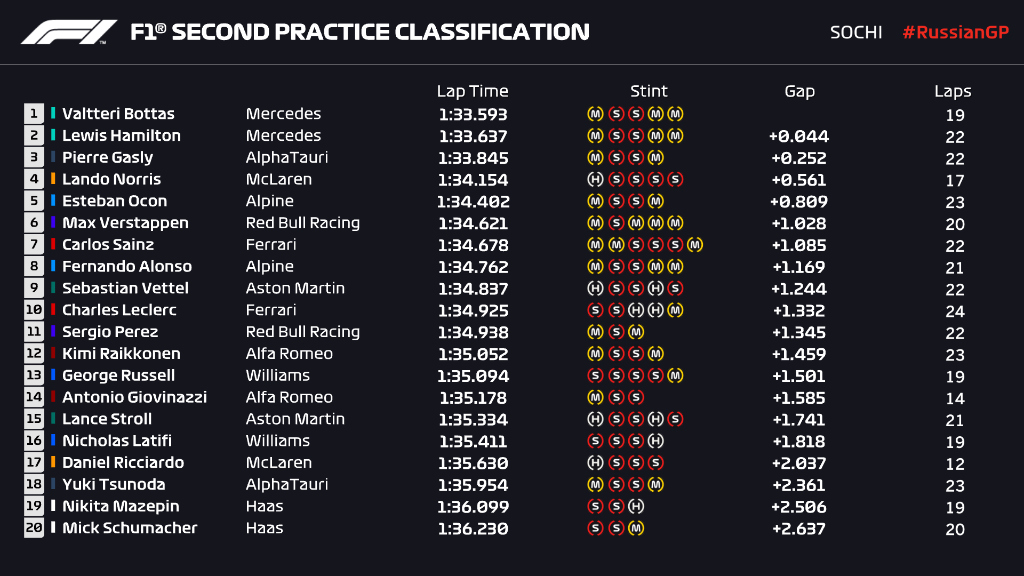 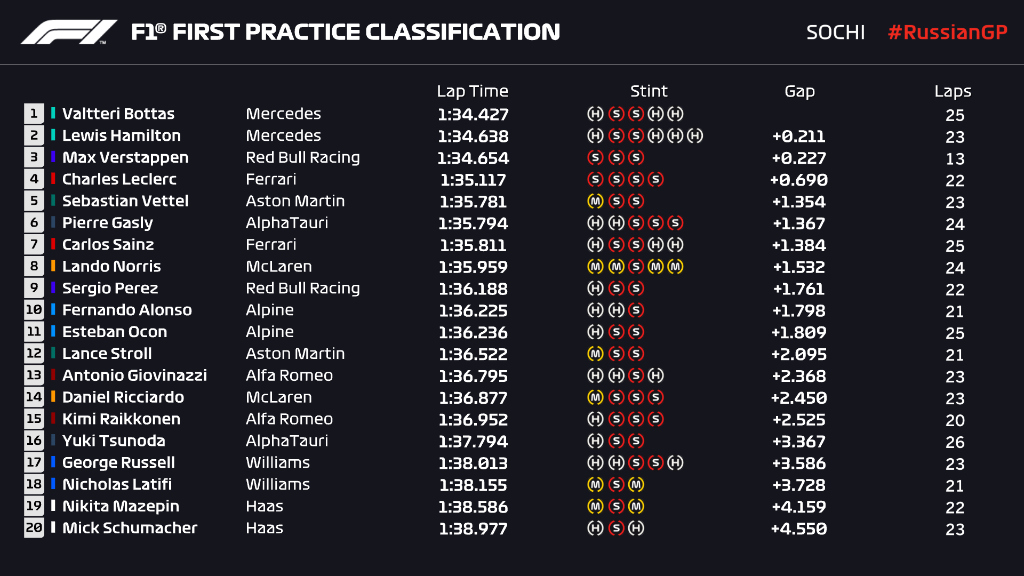 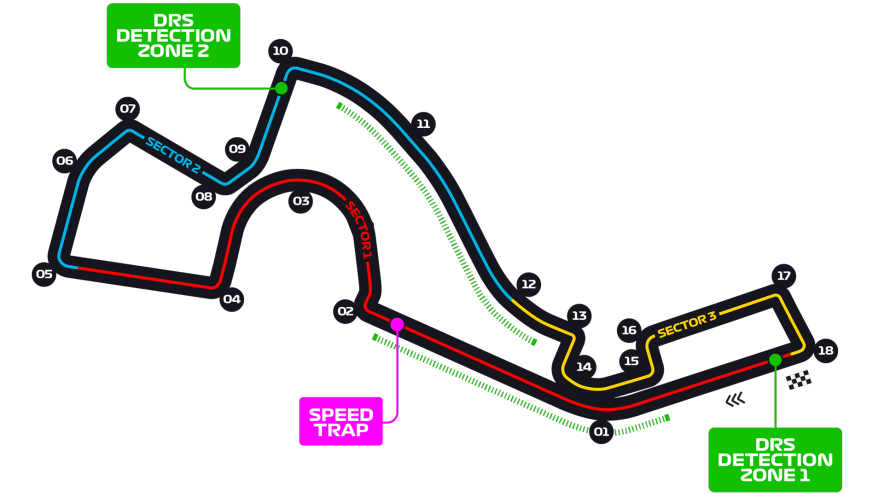 My name is Esteban Monsalve and I will be your host for this broadcast. We will provide you with pre-qualifying analysis of the Formula 1 Russian Grand Prix, standings updates and live news here on VAVEL.com.