After torching opposing pitching to the tune of six home runs during spring training, expectations for Colorado Rockies rookie shortstop Trevor Story were nearly astronomical, with the 23-year old forced to fill a gaping void left by former starter Jose Reyes, on leave from the team.

However, not even the most optimistic Rockies fan could have predicted the storybook beginning that the Irving, Texas native has undergone over the first three days of the 2016 campaign.

After going 2-for-6 with a pair of dingers and four RBIs in Colorado's Opening Day triumph over the Arizona Diamondbacks, becoming the first rookie to debut with two home runs in MLB history, Story has elevated his performance to unforeseen heights over the past few days. 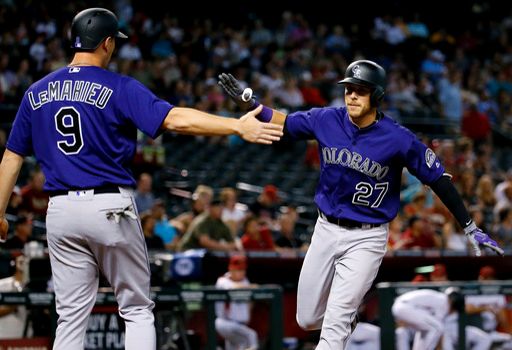 The 6'1", 180-pounder then hammered a long ball in Tuesday's loss to the Diamondbacks, becoming the first Colorado rookie to hit home runs in both of his first two games since the legendary Todd Helton in 1997.

Story was not finished, however. In the rubber match of the series at Chase Field, where the Rockies fared 2-8 in 2015, the All-Star struck out twice, but his two-run shot in the first inning proved crucial as Colorado squeaked out of the desert with a narrow 4-3 win to garner the series victory.

While Seattle Mariners second baseman Robinson Cano has equaled Story with four home runs in his first three games this season, the two are in almost unparalleled territory. They are only two of four players in MLB history to hit four homers in the first three games of action.

Can Story Continue His Showing?

Now, the question remains: Can Story continue tearing the cover off of the ball while pacing a Rockies lineup that managed to smack 10 home runs in their first three outings, tops in the MLB?

In order to do so, Story must improve his plate discipline. The young gun has as many strikeouts, four, as hits thus far, with each of his hits sailing over the fence.

He must increase his patience at the plate is he wishes to replicate this record-setting start moving forward. If he is able to continue this rampant pace, however, watch out for the Rockies moving forward in the NL West.