11:36 PM2 years ago
Thank you for following this great Friday boxing schedule with us. Don't miss all the details of this and much more sports through Vavel.com
11:35 PM2 years ago
At this time, Ortiz is officially proclaimed the winner. The Mexican-American extends his undefeated
11:34 PM2 years ago
Ortiz, at 22 years old, won his 16th victory in the same number of fights.

With this victory, Ortiz will be able to look for a fight for the Welter World title

Ortiz jumped his arm and put Vargas in bad condition, who went to the canvas and tackled his rival, although the referee said it was accidental.

Right at the last second, the referee stopped the fight in front of the look-out and Ortiz won

Ortiz came out even more revolted and convinced of the damage. A hook in the first few seconds doubled Vargas, who had to retreat to the lurking enemy.
11:23 PM2 years ago

Vargas was encouraged with both hands to connect Ortiz's chest without causing too much damage.

Ortiz was more cautious, but released the jab from time to time to take advantage

Vargas tries to be more offensive, but he can't land the hits because of Ortiz's good distance management.

The Mexican-American continues to dominate the fight and connected Vargas' face with powerful forehands that almost knocked him out.

A little push from Ortiz to Vargas, so the referee stopped the fight for a few seconds.

Ortiz is patient, works well with space, and released three right hands directly into Vargas' face that hurt him

Vargas tries to make the fight faster, as Ortíz begins to deploy his jap, but, above all, his powerful right wing that has not been able to connect fully
11:06 PM2 years ago

Round of knowledge, although both fighters from the beginning trying to hurt. 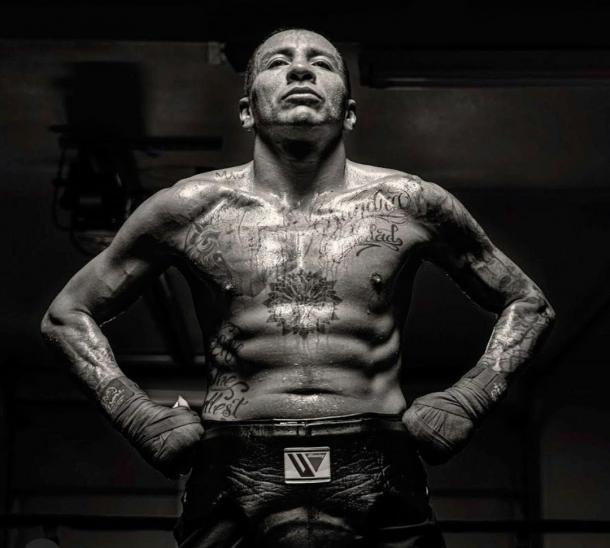 Ramos tried to go for the win in the final minutes, but never managed to find the space to connect the lethal blow. They're going to the cards
10:32 PM2 years ago

It seems that this is going to be defined in the cards, both fighters begin to look tired and throwing punches in order to win it by way of the knockout
10:28 PM2 years ago

Mosley was looking for the knockout, but Ramos didn't let his guard down and put up the fight for you, with nothing for anyone
10:24 PM2 years ago

Ramos showed up with a couple of hooks that affected Mosley, who is starting to look a little slower compared to how he started the fight
10:20 PM2 years ago

Both fighters start dealing punches, however, it is beginning to be noticed that the condition is not the best after the COVID-19 pandemic
10:16 PM2 years ago

Mosley begins to get into his rhythm with Ramos, who fails to react and receives a couple of hard hits in the face
10:12 PM2 years ago

Good impact of Mosley with the left, although Ramos did not stay with his arms crossed and at times they began to exchange blows
10:08 PM2 years ago

Round of knowledge, although Moley Jr. showed greater speed and a greater desire to cause damage
10:01 PM2 years ago
Now Shane Mosley Jr., Mosley's son, enters with 15 wins, nine of them by way of the Knocaut
10:00 PM2 years ago
Jeremy Ramos is ready and makes his appearance in the ring
9:54 PM2 years ago
The second best fight of the night is coming

9:49 PM2 years ago
Seven seconds of battle with victory for Estrada, who has already received his belt
9:45 PM2 years ago

Not even ten seconds lasted...

What a lethal blow Estrada delivered to send Adkins to the canvas in less than 10 seconds.

That's the end of the fight.

9:41 PM2 years ago
Now Seniese Estrada enters, she was Olympic champion in minor category
9:38 PM2 years ago
We have a woman's fight

Miranda Adskins enters the ring at this time

9:33 PM2 years ago
In a very short time don't miss the stellar fight between Vargas and Ortiz 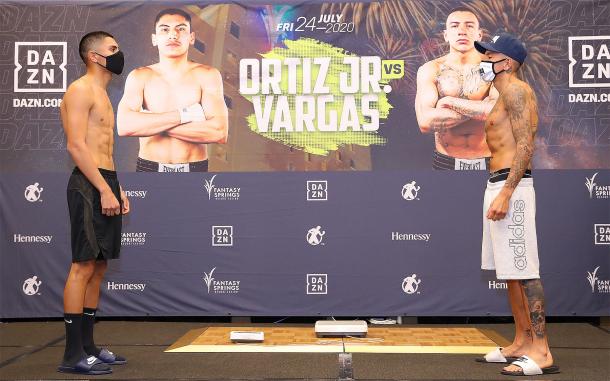 Valdez went all out for the knockout, but failed to do enough damage to bring down Morales, who lost the battle but did not fall to the canvas
9:24 PM2 years ago

One, two from Valdez who connected on several occasions, although Morales continues to defend himself well and we do not see how this fight ends before the eight rounds
9:21 PM2 years ago

Emotions were low during this period, where Morales finds it difficult to attack and take the lead in the fight
9:17 PM2 years ago

Explosive finish where Valdez connected the hook with force that slightly bent Morales
9:12 PM2 years ago

Jab coming in from Valdez, who is still taking the lead in the fight and trying to do more, however, the clarity in the fight is not yet there
9:08 PM2 years ago

Valdez still pushing and stalking, but lack of rhythm is noticeable, a couple of hits went wide and now Morales moved better
9:04 PM2 years ago

Valdez with better control, releasing a couple of hooks with the right and, at times, cornered Morales who defended himself as best he could.
9:01 PM2 years ago

Valdez connected a powerful jab that made the difference, against Morales who had more proposal, although it generated little damage
8:57 PM2 years ago
Váldez has a 12-0-0 record, today his undefeated
8:54 PM2 years ago
Now enters Hector Valdez, the favorite for this fight, already entered and all set to begin the second fight of the night
8:53 PM2 years ago
Ready the next fight

Kinda went out looking for the knockout, but he didn't find it. There was an accidental header with one minute left in the fight.
8:35 PM2 years ago

Sanchez loosening up more and looking for the final blow to take out this fight. Kinda reacts with warm blows that do not cause damage, however, connected in the face of the opponent
8:31 PM2 years ago

He fell to the canvas Kinda, when he demanded a low blow, but the referee told him the time
8:28 PM2 years ago

Sanchez handles the distance well, with good pace and continues to command this battle
8:23 PM2 years ago

Sanchez is trying to connect with the right, but he hasn't found a way to hurt Kinda. The African covers up well and resembles Mayweather's style
8:19 PM2 years ago

First minutes of knowledge of both fighters, although Sanchez came out with more proposal
8:16 PM2 years ago
This is how the American Sanchez entered the ring 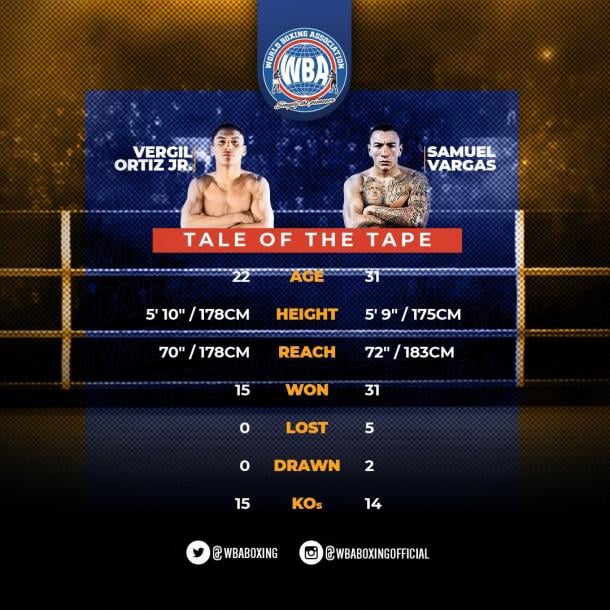 8:05 PM2 years ago
The quadrilateral that will host tonight's starring performance between Vergil Ortiz and Samuel Vargas is ready
8:02 PM2 years ago
Shane Mosley Jr. vs. J Ramos and Seniesa Estrada vs. M. Adkins will be the bouts that will open this great lineup from Indio, California
8:00 PM2 years ago
Remember that the starring role will be later, as we will have some previous fights that we will be taking to you
7:03 PM2 years ago
Big Friday night boxing night.

Although the stellar fight highlights the clash between up-and-coming Vergil Ortiz and Colombian Samuel Vargas.

Do not miss a detail of the match with the live updates and commentaries of VAVEL. Follow along with us all the details, commentaries and analysis for this Vergil Ortiz vs Samuel Vargas fight.
1:46 AM2 years ago

This fight was scheduled to take place in March, but, in view of the pandemic, it had to be postponed for several months
1:46 AM2 years ago

It will not be broadcast on television

How do they get there?

Colombia's Samuel Vargas, 31, will be looking to improve his record with 31 wins, five losses and two draws.
1:44 AM2 years ago
Ryan Garcia was the fighter at first, but when he refused, he switched to Ortiz.
1:44 AM2 years ago
Ortiz is listed as one of the young promises and this third in the OMB rankings, only behind Danny Garcia and champion Terence Crawford.
1:44 AM2 years ago
The young fighter declared that it will be very good for his career to win this fight

"We are currently in the same place as last year, which is the best thing that could happen. It's nobody's fault, but this pandemic makes us all take what we can get. I was supposed to fight Vargas in March. Fighting with him and beating him will definitely give more weight to my name and open more doors to fight for a world title".

The Mexican-American fighter will be looking to maintain his undefeated record, as he has won 15 consecutive victories since making his debut in 2016 against Julio Rodas.
1:44 AM2 years ago

The Vargas vs Ortiz fight will take place at the Fantasy Springs Resort Casino in Indio, California. The start is scheduled at 8 pm ET.
1:43 AM2 years ago

Welcome to VAVEL.com’s LIVE coverage of the fight Ortiz vs Vargas!