Thank you for following the rebroadcast of the fight between Bivol and Alvarez for the light heavyweight title. Thank you very much.
12:37 AM16 days ago

By unanimous decision with scores of 115-113 Dmitry Bivol has pulled out the victory and remains undefeated by defeating Canelo Alvarez.
12:32 AM16 days ago

Bivol more effective in the distribution of goals against a Canelo who has not felt comfortable all night. The winner will be decided on the scorecards in a very close fight.
12:27 AM16 days ago

In spite of everything, Canelo has not stopped throwing punches and keeps trying to get him down in the ribs. A curious action happened when Bivol went all out and Canelo ended up charging him, although it didn't go to the next level.
12:22 AM16 days ago

Bivol continues to take the lead against a Canelo who is once again on the ropes, although this time he did not come out of it badly. The Mexican will have to come out to win in the last episodes to think about victory.
12:17 AM16 days ago

Canelo started more insistent and going forward with several punches that alerted the Russian to be more cautious. Now Alvarez put Bivol against the ropes, who resisted to get out of there. The Mexican changed his strategy for this episode.
12:12 AM16 days ago

The crowd is cheering for Canelo to go forward, because once again he was in serious trouble on the ropes against the hooks thrown by Bivol, who has been looking better in the last few minutes. Canelo went down but it was the result of a push.
12:07 AM16 days ago

Canelo when he reloads against the ropes is having a lot of trouble against the attack of Bivol who is looking more mobile. Near the final minute a flurry of punches between the two left the Russian better off.
12:02 AM16 days ago

Bivol continues to generate damage with that right hand that has marked throughout the fight, but Canelo seems to be gradually reacting and is taking a greater distance to avoid those hard blows of the Russian.
11:57 PM16 days ago

Canelo Alvarez keeps trying with his right hand, whether it's a flying right or an operative right, he keeps attacking the lower area. However, Bivol put him against the ropes and hurt Canelo, who invited him to continue hitting him.
11:52 PM16 days ago

The Russian takes advantage of his height to take distance and connect with the right, although Canelo tries to answer and did so with a right hand that went straight to Bivol.
11:47 PM16 days ago

Good combination of right lefts from Canelo, however, Bivol did not stand idly by and answered in the same way, so the Mexican had to take a step back. In the end, the Russian's straight left went into Alvarez, who has been a little surprised.
11:42 PM16 days ago

Bivol's flurry of punches at the start, but Canelo reacted with a "be still" that generated damage and provoked shouts from the stands. Bivol has connected a couple of effective punches, thanks to his distance with his right.
11:37 PM16 days ago

This is how the 1st round went

Full round of knowledge, where neither of the two has been rushed, although the Russian Bivol is attacking more with the jab that generated a couple of times damage against Canelo, who is still looking to generate damage with the right.
11:27 PM16 days ago

The fight between Canelo and Bivol begins.
11:22 PM16 days ago

Appear at the T-Mobile Arena

First Dmitry Bivol and then the Mexican Canelo Alvarez, but both boxers are already in the ring just before the bout starts in the semi-complete weight class.
11:17 PM16 days ago

The national anthems of both Mexico and the United States are sung.
11:12 PM16 days ago

Here are some stats so you know everything about Canelo vs Bivol: 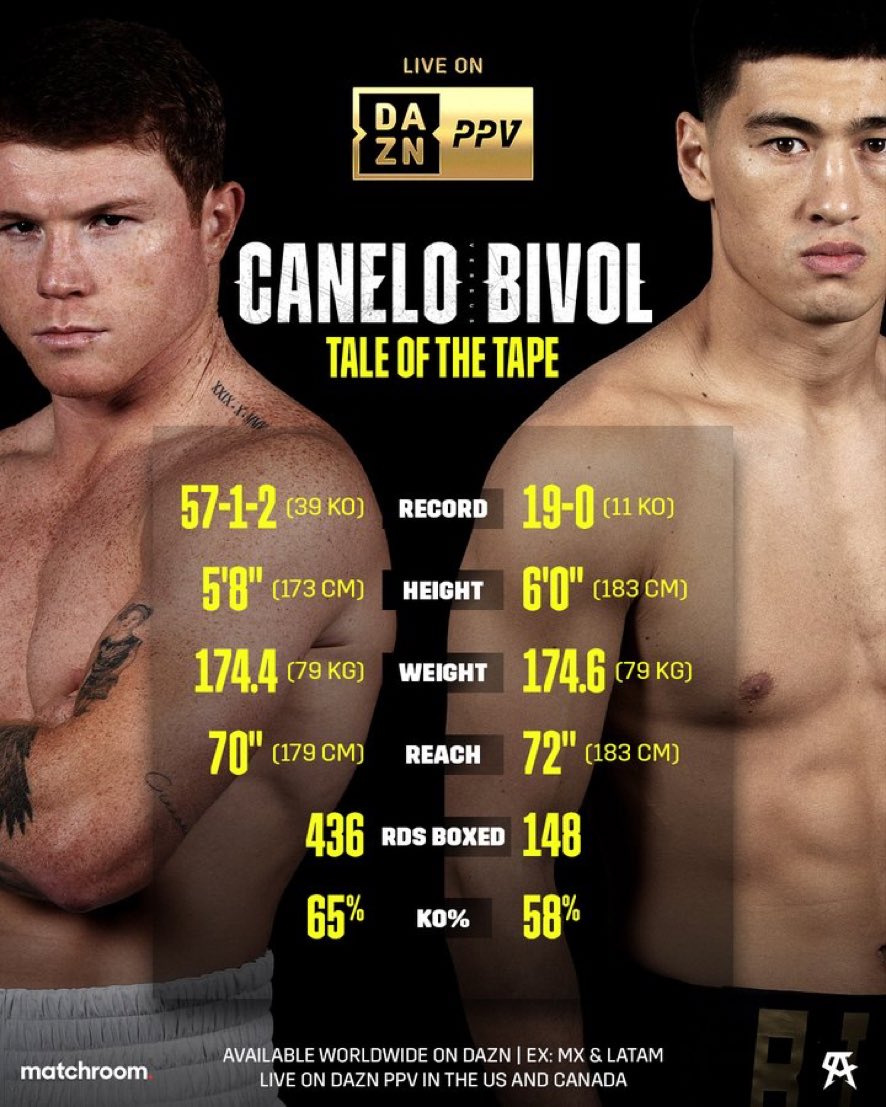 Mike Tyson is in Las Vegas to watch the Canelo Alvarez fight.

The fight between Canelo Alvarez and Dmitry Bivol is about to start in Las Vegas.
10:57 PM16 days ago

The Mexican Valenzuela did not explode when he had to and Love went back to taking his distance and connecting with a couple of straight punches, which did hurt the Aztec's face.
10:47 PM16 days ago

The Mexican Valenzuela's aim has gone and he can no longer find a way to throw accurate punches, against a Love who has been smart and is now overcoming the fight.
10:42 PM16 days ago

Valenzuela has not been able to do any damage down the stretch and will have to go out and win in the last two periods, probably by knockout.
10:37 PM16 days ago

Love continues to generate damage with straight lefts and keeping the long distance which is what has worked for him in the last few rounds to probably maintain the advantage so far in the fight.
10:32 PM16 days ago

Love has taken control of the fight, taking it under his rhythm and no longer letting him land punches as he did in the second period. Mexican Valenzuela will have to tighten up in the final stretch.
10:27 PM16 days ago

A purely chess duel, where each player is moving his piece in search of generating damage to the rival. The match started out very active, but as it has gone on, the distribution of goals has gone down.
10:17 PM16 days ago

The crowd starts to get impatient because Love and Valenzuela's fight has been going downhill and they start chanting "Canelo, Canelo". Montana slowly getting better rhythm and distance in the fight.
10:12 PM16 days ago

A straight left in the final stretch of Love hits the face of the Mexican Valenzuela, who has not been as effective in his punches compared to other rounds.
10:07 PM16 days ago

Love has taken a greater distance and greater mobility to avoid Valenzuela's punches that are connecting with him, mainly with the right that he usually looks for as soon as his opponent leaves some space.
10:02 PM16 days ago

The Mexican Valenzuela returns it quickly and throws the right that causes Love to fall, so the fight has been quickly evened.
9:57 PM16 days ago

When it looked like a routine round, between the blow and the slip caused the slight fall of the Mexican Valenzuela, who did not start this fight well.
9:52 PM16 days ago

It is worth remembering that Gabriel 'Gollaz' Valenzuela is a boxer from Jalisco and already has 25 victories, little by little his career has been on the rise and he will be in the co-main event of this show.
9:47 PM16 days ago

The next bout promises to be very exciting when Montana Love and Gabriel Valenzuela square off.
9:42 PM16 days ago

For the second time in his career, Canelo Alvarez gained 178 pounds and, therefore, implemented a special vegan diet to make weight and not have major problems with his body.
9:37 PM16 days ago

It should be noted that Dmitry Bivol will go out tonight without the flag and anthem of his country, because the World Boxing Association imposed a punishment against both Russian and Belarusian fighters.
9:27 PM16 days ago

It should be noted that more or less the stellar fight between Canelo and Bivol would be given approximately at 10pm in Mexico and 11pm Eastern United States.
9:22 PM16 days ago

This Friday the weigh-in between Canelo and Bivol took place, although the most curious thing was not generated by either of the two boxers but by Alvarez's daughter, who in the middle of the press conference stuck her tongue out at her father's rival.

In one of the most anticipated fights of the night, China's Zhang Zhilei defeated American Scott Alexander in the first round by knockout at heavyweight.
9:12 PM16 days ago

That's right, a few moments ago Canelo arrived at T-Mobile Arena and he did it in a very good mood and with the conviction to stay in the top:

It is worth mentioning that we are only two fights away for the Mexican Canelo Alvarez to enter the ring, so we will keep you informed and give you all the details about this fight.
9:02 PM16 days ago

Saul Canelo Alvarez, after several months, will return to the ring with the mission of retaining his title against Dmitry Bivol, in a fight that will take place in Las Vegas. We begin with the coverage of the event through VAVEL.
8:57 PM16 days ago

Do not miss a detail of the match with the live updates and commentaries of VAVEL. Follow along with us all the details, commentaries, analysis and lineups for this Canelo Alvarez vs Dmitry Bivol match for the Boxing 2022.
8:52 PM16 days ago

What time is Canelo Alvarez vs Dmitry Bivol match for Boxing 2022?

This is the start time of the game Canelo Alvarez vs Dmitry Bivol of May 7th in several countries:

The fight between Saul Canelo Alvarez and Dmitry Bivol is scheduled to take place after 9:30 PM (Mexico Central Time), in one of the most anticipated fights of the year.
8:42 PM16 days ago

Shakhram Giyasov vs Gomez, for the U.S. Welterweight title

Prior to the fight, Bivol acknowledged that he doesn't care that they are already planning the third part of the Canelo-Golovkin, so he said he is focused on this Saturday's fight.

"The truth is that I don't care if Canelo and Golovkin have an agreement, what matters to me is that they gave me 12 rounds with Canelo and that for me is enough."

In addition, he noted that he comes 100 percent focused in search of pulling out the victory.

"I think the fight is going to be difficult, that's why I come well focused. It is undoubtedly the most important fight of my career and I come with the firm determination to win."

The Russian, with the same age as the Mexican, has a lower number of fights, but the 19 he has fought, all 19 he has won, and 11 of them have been by knockout.

His most recent fight was against his compatriot Umar Salamov on December 11 of last year with a unanimous decision win on the scorecards.

Motivation to the maximum

El Canelo Alvarez confessed that his greatest motivation to keep fighting is precisely boxing because he is passionate about it and wants to prove it once again in the ring.

He also thanked all the support he has always received from the fans in Las Vegas, to whom he hopes to contribute with a great show on Saturday night.

"I feel very happy, they always receive me very nicely. Yesterday we were counting the times I have fought in Las Vegas, there are 15 and the truth is that I am very happy to be here, thank you all for your support, as always."

The record that the tapatío holds is very good because in 60 fights he has won 57 of them (39 by knockout) with two draws and one loss, which happened on September 14, 2013 when he lost to American Floyd Mayweather, Jr. by split decision.

In addition, the last time he stepped into the ring was on November 6, 2021 when he defeated Caleb Plant by chloroform in the eleventh round.

What title will be disputed?

It should be noted that this Saturday from the United States the World Boxing Association (WBA) semi-complete title will be disputed, remembering that the winner is almost a fact that he will face next September against the Kazakh Gennady Golovkin.
8:12 PM16 days ago

The Canelo Alvarez vs Dmitry Bivol match will be played at the Arena T Mobile, in Nevada, United States. The kick-off is scheduled at 10:30 pm ET.
8:07 PM16 days ago

Welcome to VAVEL.com’s LIVE coverage of the Boxing 2022: Canelo Alvarez vs Dmitry Bivol!