Well, that will do it for me. Thank you for joining me tonight. Be on the lookout for the match recap after postgame press conferences are over. I am Jordan Wohl, thank you and have a great night!

FULL TIME! 2-2. Good result for the Union against a very good Galaxy team.

90'+4': Alberg fouls a Galaxy player. Free Kick Galaxy in the defensive half.

90'+2':Rosenberry gets a cross in but Sapong can only get a tiny touch on it

90'+1': Fabinho takes it down the flank unabated until Zardes steps on him

89': Galaxy sub: Magee off for Lletget

89': Rosenberry gets a rip but Kennedy is there to collect it.

88': Roland Alberg comes in for Barnetta for Philadelphia's last sub

86': Pontius is coming off for Fabian Herbers

84': Rosenberry again with a great defensive play to start the Union offense

83': Kennedy gets a yellow for time wasting

82': Nogueira gets the second ball and shoots wide and weakly out of bounds. Goal Kick Galaxy

81': Union earn another corner kick at Talen Energy rises for the kick

79': Free Kick Union in the offensive half

78': Fabinho's ensuing shot is thought to be deflected by a Galaxy player, but the referee sees it as a goal kick

74': Rosenberry is having an excellent game tonight, his ability to get forward as well as his improving defensive skills make this team better

73': Jeff Larentowicz comes on for Gerrard

70': Le Toux comes off for Ilsinho

69': Extremely nice move by Pontius to get past his defender but his ensuing shot is wide. Goal Kick Galaxy

68': Marquez beats Zardes in the air to clear it away

67': Tempo has really picked up after that last goal for both sides

65': Gerrard tries a cross but Yaro is there to clear it away

64': GOAL GOAL GOAL! On the ensuing corner, Kennedy cant hold onto the inital shot leaving Rosenberry with a tap-in! 2-2

62': Union with good possession offensive half, which leads to a corner kick.

60': Union offsides on what would have been an equalizer by Pontius. Free Kick Galaxy.

Barnetta's free kick is curled toward the opposite post. Kennedy dives but the ball was always going wide. Goal Kick Galaxy

53': Union lacking the final ball into the box right now. Need to follow through on their opportunities or it will come back to bite them.

51': Good work by Zardes to track back defensively and earn his side a goal kick

50': Pontius nearly gets free, but Kennedy comes out to snag the ball

47': GOAL! Mike Magee gets an open shot in the box, which was set up by Gerrard. Magee puts it top corner where Blake had no shot to save it. 2-1 Galaxy

45'+1': Pontius with a free header from 5 yards out but puts it over the crossbar.

45': One minute added at the end of first half

43': Dos Santos with a shot from 25 yards out. Well hit but rising over the net. Goal Kick Union

41': Fabinho with a low hit cross that Sapong is unable to get on target. He is down for a minute alongside Van Damme but both get back up.

40': Sapong fouls a Galaxy player. Free Kick Galaxy in the defensive half.

39': Van Damme mishits a cross and it goes out for a Union throw in in the defensive half

38': After a small stoppage by Steven Gerrard, the corner leads to nothing more than Goal Kick

34': Union trying to start counter but Pontius' ball is too far for Barnetta and is colelcted by a Galaxy defender

33': Both teams battling to keep possession

29': Rosneberry's cross almost finds Pontius on the back post, but Pontius cant get a touch. Goal Kick Galaxy

28': Union playing a lot through Barnetta

27': Free Kick Union about 35 yards out. Barnetta to take the kick

26': Le Toux is down for a minute, but pops right up. Free Kick Union

25': Corner Kick is cleared out and Galaxy try to rebuild possession

24': Fabinho having a tough time with Zardes out on the wing.

21': Barnetta takes the corner kick. The ball trickles out to Fabinho, who takes it on a half volley, but the ball dribbles to Kennedy for the easy save.

21': Rosenberry's long throw is headed out for a corner kick

19': Union trying to build possession in the offensive half

Good passing from Dos Santos, who is credited with an assist on the goal, helped set that one up.

15': GOAL!! Robbie Rogers! Galaxy strong some passes together on a counter and beat Fabinho down the left side. Rogers with a great shot far post that beats Blake. Tied 1-1

13': Galaxy trying to build out of the back

11': Barnetta with an excellent set piece. Sapong flicks it backpost but no one is there to put the ball into the net. Goal Kick Galaxy

9': Union looking like the better side so far. They are controlling possession and just earned a corner kick.

8':Carroll gets a foot on it by the back post, but Kennedy is right there to collect it easily.

7': Husidic fouls a Union player. Union free kick in the offensive half with Barnetta over it.

Galaxy stood watching as the ball was free in the box and Nogueira, with the good hustle, followed up on it for an easy score.

4': GOAL!!! Poor defending by Galaxy in the box allows Nogueira to scoop up the second ball off a cross for the easy goal. 1-0 Union

3': Yaro finds Barnetta on a chip forward but Barnetta cannot bring it down as possession is changed hands.

2':Husidic tries a long through ball for Dos Santos but it goes out for a Union goal kick

Kickoff. Union attacking The River End side first and starting with the ball

About to get started here at Talen Energy Stadium!

Los Angeles rolling out a tough lineup tonight. Four forwards ( Dos Santos, Zardes, Keane, and Magee) all starting in this odd 4-3-3. Husidic and Gerrard will have to pick up the defensive responsibilities for the midfield. 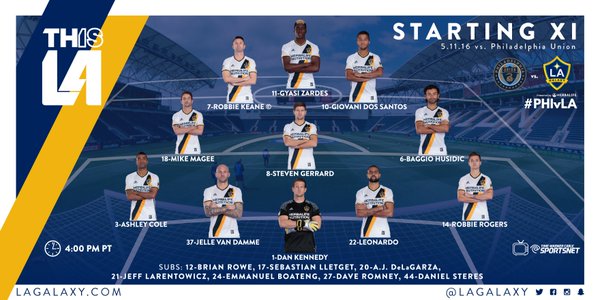 Philadelphia rolling out their usual starting lineup as of late. Fabinho gets the start over Gaddis and Tribbett is still not match fit and Yaro will start for him again. 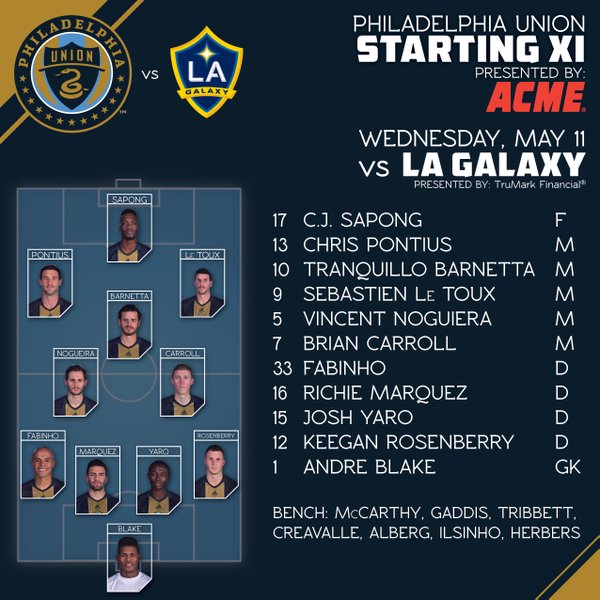 Welcome to Talen Energy Stadium! We are about an hour from kickoff! Stay tuned for lineups.

Another selection choice will be the inclusion of Ilsinho and/or Roland Alberg in the midfield. Ilsinho could allow Sebastien Le Toux to rest for Saturday’s matchup if he gets the nod. For Alberg, he could allow Tranquillo Barnetta to rest up for their match against the Impact. Considering Barnetta was listed with osteoarthritis on the injury report early this season, he likely cannot play two 90 minute games only three days apart.

For Wednesday’s game, Gaddis has the pace to recover against the Galaxy’s talented wingers, but will likely give very little to the team going forward on offense. Fabinho has certainly improved his defensive skills in recent time, plus he provides service from the wings to forwards. It will be up to the technical staff to determine whether Fabinho’s ability to get forwards puts him in front of Gaddis.

A possible selection choice for Curtin and his staff is the inclusion of Fabinho or Ray Gaddis in the backline. Fabinho was suspended last game due to yellow card accumulation. In his absence, Gaddis filled in admirably.

Let’s discuss possible selection dilemmas for Philadelphia. One thing to keep in mind is that Philadelphia will also play on Saturday against Montreal Impact in a big MLS Eastern Conference matchup. With this in mind, the technical staff will have to determine how to rotate this squad with two big tests this week.

In their last game, Los Angeles tore apart New England Revolution, 4-2. The game featured Robbie Keane’s return to the starting eleven, where he added two goals that were set up by Zardes.

For comparison’s sake, Fabinho is 5’7”. If Zardes floats out to the wings, expect Philadelphia to build on team defending to keep the United States International in check. On corner kicks, Richie Marquez, who is also listed at a little over six feet tall, will likely be responsible for marking Zardes.

A key matchup for Philadelphia is Zardes going up against likely left fullback, Fabinho. Galaxy Head Coach Bruce Arena plays at times a 4-3-3, with two central attacking midfielders behind a forward as he did on Sunday. Depending on the night, the three up top could be flat across. Zardes is listed at a little over six feet tall and 175 pounds, which does not stop him from being exceptionally quick on the field.

Players such as Robbie Keane, who returned last week to score two goals, and forwards Giovani dos Santos as well as Gyasi Zardes will cause some matchup problems for Philadelphia if they see playing time Wednesday.

On the matchup side, the Galaxy are a whole different animal offensively than San Jose. As Curtin told reporters on Monday, Los Angeles is bringing their entire squad.

If the Union intend to get a result against a legitimate MLS Cup and Supporter's Shield contender in Los Angeles, the team as a whole has to do better with killing off games in the end, whether with a lead or a tie.

Curtin also said this after the San Jose game. “We were a little careless with the ball, I think for about, from the 45th to about almost to the 76th minute we were under control, we were creating chances, we were pushing the tempo. Everything that they had was kind of long, from their goalkeeper and giving it right back to us. For whatever reason a couple of bounces started going their way, they pressed a little better, and started picking the balls off, and we were unable to get back to keeping the ball and killing the game off.”

Further, fans were also disappointed in Philadelphia Head Coach Jim Curtin’s choice of substitutes. Curtin held onto his subs until the 73rd minute and then made two subs immediately after San Jose scored to tie the game.

In the game, rookie Joshua Yaro and Richie Marquez did well to keep Chris Wondolowski off the scoreboard as well as limit his opportunities to two shots with one on target. The offense did sputter in the second half for Philadelphia as the team did not register a single shot on goal in the half.

In their last game, Philadelphia dropped two points late to San Jose Earthquakes thanks to a late equalizer by Simon Dawkins.

Head referee for Friday’s match will be Sorin Stoica. The assistant referees will be Jeff Muschik and Danny Thornberry. The fourth official will be Marcos DeOliveira.

In total, Philadelphia has yet to beat Los Angeles in Chester as they sport a record of two losses and one draw.

If previous meeting results are any indication of the upcoming between these two sides, Philadelphia fans will be nervous coming into this matchup. In the last three matchups, the Galaxy have outscored the Union 13-3 en route to three wins. Out of those three matchups, only one was played in Chester. In 2013, Philadelphia lost at home to Los Angeles, 4-1.

The game will be broadcasted locally on the Comcast Network in the Philadelphia area, TWCSN-LA in the Los Angeles area and on MLS LIVE.

Welcome to VAVEL USA’s LIVE coverage of the 2016 Major League Soccer Regular Season. Today’s matchup between Philadelphia Union and Los Angeles Galaxy will take place at Talen Energy Stadium in Chester, Pennsylvania. I’m Jordan Wohl, and I’ll be providing minute-to-minute updates, commentary, and results of the match. The game starts at 7 PM ET and there will be coverage pregame, mid-game, and postgame.