Thank you for following today's match between the Montreal Impact and Toronto FC. The recap of this match will be up shortly. This is Matt Niksa saying "so long!" I hope you all enjoyed the match as much as I did!

95': Referee Juan Guzman blows the final whistle and the game is over! If there's one word to describe this win from an Impact perspective, it's bittersweet. The Impact absolutely dominated the first half and might have put the nail in TFC's coffin when left back Ambroise Oyongo scored in the 53rd minute. But two Americans--Jozy Altidore and Michael Bradley--scored to cut the deficit to one and keep TFC alive. Although the Impact won the first leg, they could've--and probably should've--won by more than one goal. TFC, meanwhile, need to get off to a much better start if they hope to win next week's second leg. The visitors got off to a terrible start but played much better in the second half.

94': Drogba wins a corner and tries to pump up the crowd. We're only moments away from the final whistle.

93': Venegas drives forward and passes the ball towards TFC's six-yard-box, but TFC center back Drew Moor boots the ball out for an Impact throw-in.

90': There will be four minutes of added time.

87': TFC left back/midfielder Justin Morrow is fouled about 30 yards from the Impact's goal. Giovinco takes the free kick but badly mishits the ball. The ball goes out for an Impact goal kick.

81': Impact right back Donny Toia comes on for Hassoun Camara. Camara was unable to continue after suffering an injury right after TFC scored their second goal.

78': Impact right back Hassoun Camara is down on the field and in some pain. Meanwhile, the TFC fans are jumping up and down and making their presence felt in the cavernous Olympic Stadium.

73': GOAL! TFC scores again! The Impact fails to clear the ball from their 18-yard-box and TFC substitute Tosaint Ricketts lays the ball off to TFC captain Bradley, who hits a first-time shot with the inside of his right foot past Impact goalkeeper Bush. Make no mistake about it--TFC is back in the series! Impact 3 TFC 2 (Impact 3 TFC 2 on aggregate).

57': TFC coach Greg Vanney subs out both of his starting center midfielders. He brings on Tosaint Ricketts and Will Johnson for Jonathan Osorio and Armando Cooper. Ricketts will play up top with Altidore and Giovinco while Johnson will support Bradley in the midfield.

53': GOAL! The game--and the series--might be over! Impact left back Ambroise Oyongo dribbles thirty yards upfield and takes a shot at the top of TFC's 18-yard-box. The ball bounces by Irwin and nestles into the bottom-right corner of the goal. There will be questions about Irwin's goalkeeping on the play, but the Impact certainly won't care--they're now up 3-0 on aggregate. Impact 3 TFC 0 (Impact 3 TFC 0 on aggregate).

47': Giovinco gets on the end of a Morrow cross, but his shot is blocked by Impact center back Victor Cabrera. The Impact clears away the ensuing corner kick.

The second half is underway! Impact 2 TFC 0

46': Referee Guzman blows his whistle twice to end the first half. What a half by the Impact! Oduro and Mancosu scored in the 10th and 12th minute, respectively, to send the home fans into a frenzy. TFC eventually settled down and began to control possession, but the Impact defense held firm. TFC cannot concede another goal, while the Impact needs to make sure TFC don't score a priceless away goal. Halftime score: Impact 2 TFC 0 (Impact 2 TFC 0 on aggregate).

45': There will be one minute of stoppage time.

42': Giovinco is fouled just outside the Impact's 18-yard-box. Giovinco looks set to take the free kick. The ball sits about 20 yards outside of goal, at the center of the field. Giovinco's free kick is blocked by the wall.

40': TFC midfielder Cooper is fouled by Impact center back Ciman. Giovinco takes the ensuing free kick but the Impact head the ball away.

39': Impact forward Ignacio Piatti dribbles from his own half, runs at the TFC back line. He decides to try and chip the ball over TFC goalkeeper Clint Irwin but his attempted chip flies over the crossbar.

29': Mancosu uses his head to flick the ball to Oduro, who hits a first-time volley that Irwin palms away for a corner kick. TFC clears the corner kick and the chance is gone.

26': Giovinco is fouled by Impact center back Victor Cabrera. The Impact game plan seems to include fouling Giovinco whenever he touches the ball. Referee Juan Guzman hasn't handed out any yellow cards, though.

20': TFC midfielder Armando Cooper slips the ball to Giovinco, who takes the ball and dribbles towards goal. His shot is just over Bush's crossbar and the Impact breathes a sigh of relief.

18': Dominic Oduro is the man-of-the-match so far. The Impact forward has a goal and an assist through 18 minutes as the Impact has stormed out of the gate to take a quick 2-0 lead.

15': TFC coach Greg Vanney is currently talking with TFC right back Steven Beitashour. The visitors look rattled at the moment.

12': GOAL! The Impact is tearing TFC apart! Oduro chips a ball over TFC right back Steven Beitashour to Ignacio Piatti, who crosses the ball to Impact center forward Matteo Mancosu. Mancosu beats four TFC defenders to the ball and smashes it past TFC goalkeeper Irwin. What a start by the Impact! Impact 2 TFC 0 (Impact 2 TFC 0 on aggregate).

5': Giovinco is fouled by Impact right back Hassoun Camara right outside the Impact's 18-yard-box. Giovinco takes the free kick, but it flies over the crossbar.

A reported 61,004 Impact and TFC fans are in attendance for tonight's match.

The match has been delayed for a bizarre reason: one of the goal boxes was several feet too narrow on both sides. The Olympic Stadium field staff is putting down new lines to correct the goal box size. The match should start shortly, stay tuned for more updates!

TFC is in a 3-5-2 formation, which they used in both legs of their Eastern Conference semifinal series against New York City FC. The Impact is in their tried-and-true 4-3-3 formation, with Oduro, Mancosu, and Piatti up top. 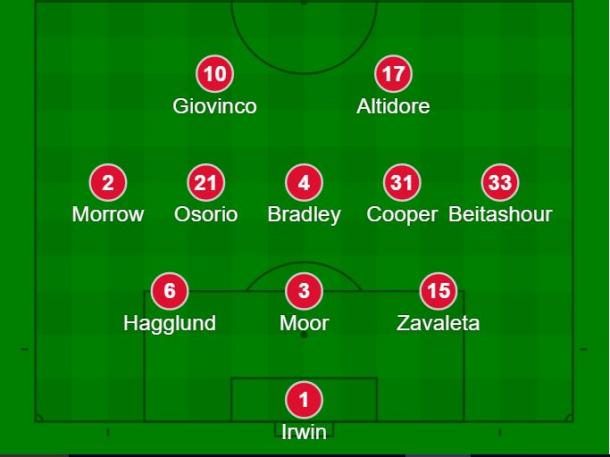 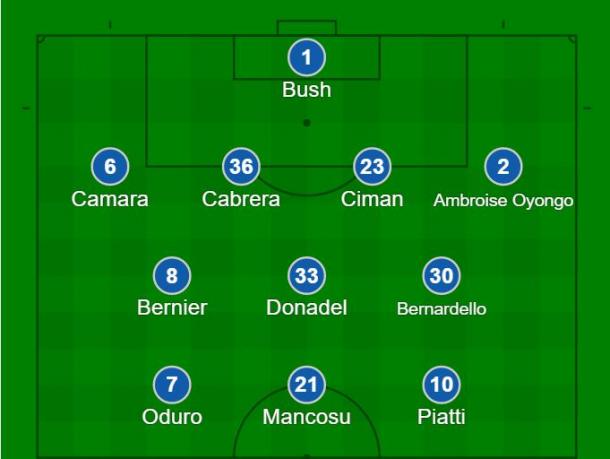 Lineups have been announced and players are warming up!

Juan Guzman is the center referee, Eduardo Mariscal and Matthew Nelson are the two assistant referees. Armando Villarreal is the fourth official.

Hello, everyone! My name is Matt Niksa and I'll be covering today's game between host Montreal Impact and Toronto FC.

Here are the projecting starting lineups for the Montreal Impact and Toronto FC.

Toronto FC's game plan against the Impact will be to double-team Ignacio Piatti and find both Giovinco and Altidore in space. Piatti scored three goals in two regular-season matches against TFC in 2016, and two of those goals came when Piatti was isolated against TFC right back Steven Beitashour. Beitashour alone cannot defend Piatti, so TFC will need right central midfielder Armando Cooper to help Beitashour cover Piatti when the Impact is in possession. When TFC is in possession, they will likely try to force the Impact's two center backs, likely Victor Cabrera and Laurent Ciman, to defend both Giovinco and Altidore. Giovinco is usually a handful for two center backs, so look for Giovinco to occupy both center backs while Altidore makes darting runs through the Impact's back line. If Giovinco can find Altidore when Altidore is making these runs, TFC will generate multiple scoring opportunities on Tuesday.

The Impact's game plan against Toronto FC will be to absorb pressure and then counterattack. The Impact is arguably the best counterattacking team in Major League Soccer (MLS) because of their attacking trident of Ignacio Piatti, Matteo Mancosu, and Dominic Oduro. Piatti is a ruthless finisher and can dribble past one or two players at a time, Mancosu can create space for a shot and knows how to time his runs, and Oduro can outrun defenders and lay the ball off to teammates. These three players complement each other well and are a nightmare to defend in transition. Head coach Mauro Biello will likely ask his players to sit back and defend when TFC is in possession, but when TFC lose the ball or are caught out of position, Biello will implore his team to go forward and exploit gaps in TFC's defense. If TFC loses the ball in their own half or gets caught with too many players forward, look for the Impact's attacking trio of Piatti, Mancosu, and Oduro to counterattack quickly.

Toronto FC advanced to the Eastern Conference Championship after routing host New York City FC 5-0 at Yankee Stadium to win 7-0 on aggregate. Toronto FC effectively ended the series in the sixth minute when star Designated Player (DP) Sebastian Giovinco took a touch by NYCFC center back Maxime Chanot before firing the ball into the bottom-left corner of the net. In the 19th minute, NYCFC's other center back, Frederic Brillant, fouled Giovinco in NYCFC's 18-yard-box, and Giovinco dusted himself off to bury the penalty kick. TFC scored their third goal of the half in the 29th minute when in-form striker Jozy Altidore hit a searing volley that flew past NYCFC goalkeeper Eirik Johansen. TFC would go on to score two more goals in the second half to cap off a sensational road win. The 7-0 aggregate win was the largest margin of victory in MLS playoff history. When the final whistle sounded, TFC players and fans celebrated after advancing to the Eastern Conference Championship for the first time in club history.

The Impact advanced to the Eastern Conference Championship after defeating the New York Red Bulls 2-1 at Red Bulls Arena to win 3-1 on aggregate. The Red Bulls could have tied the series on aggregate in the 20th minute, when Red Bulls winger Gonzalo Veron was brought down by Impact goalkeeper Evan Bush in the Impact's 18-yard-box. Yet Bush redeemed himself by saving the ensuing penalty kick to preserve the Impact's aggregate lead. The Impact scored a crucial away goal in the 51st minute when talisman Ignacio Piatti hit a left-footed blast off the underside of the crossbar and in. The Red Bulls pulled a goal back in the 78th minute when Bradley Wright-Phillips' deflected strike rolled past Bush, but the Impact put the game--and series--to bed when Piatti took a pass from substitute Didier Drogba and slotted the ball past Red Bulls goalkeeper Luis Robles. When the final whistle sounded, Impact players and fans celebrated after advancing to the Eastern Conference Championship for the first time in club history.

The Montreal Impact looks to win the first leg of their Eastern Conference Championship match in front of their fans when they take on Toronto FC on Tuesday, November 22, at Olympic Stadium in Montreal, Quebec. The game will kickoff at 8:00 PM ET and can be seen on ESPN in the U.S. and RDS in Canada. This will be only the 15th all-time meeting between the two sides, with Toronto FC holding a slim (win-loss-draw) 6-4-4 all-time series lead.

Hi, and welcome to VAVEL USA's LIVE coverage of Montreal Impact - Toronto FC. My name is Matt Niksa and I'm here to bring you minute-by-minute updates of Tuesday night's match.