The Philadelphia Union welcome the New York Red Bulls to Talen Energy Stadium in Chester, Pennsylvania on Saturday night in search of their first win of the 2017 Major League Soccer season.

The Union and the Red Bulls have had substantially different form so far this season in Major League Soccer play. Hosts, Philadelphia sit rock bottom of the Eastern Conference, as well as the league itself, having failed to win a match through eight games so far this season. Meanwhile,  New York is in second place in the East, just two points off of Orlando City SC in the top spot, having played two more games.

However, despite their lofty place in the standings, the Red Bulls have struggled at times this season, having already lost four games while also struggling to adjust to the team's new 4-2-2-2, and conceding plenty of goals thanks to the rotating door that is their defense.

Philadelphia holds a pretty woeful all-time record of 5-11-3 against the New York Red Bulls in league play. In contrast, their home record versus the Red Bulls is much better and standing at  4-4-2 all-time, the most recent of which was a half-hearted loss on the final day of the 2016 season, courtesy of Alex Muyl and Bradley Wright-Phillips, in which Philadelphia rested a number of their players with a playoff spot essentially secured prior to kick off.

Despite making the playoffs last season, Philadelphia failed to win any of their three league matches against the Red Bulls, losing two and drawing one. Club legend and current DC United striker, Sebastian Le Toux is Philadelphia's all-time leading scorer against the Red Bulls with six goals, followed by the now retired Conor Casey with four. As for current members of the Union, C.J. Sapong and Chris Pontius are joint top scorers with two goals (not including matches with Sporting Kansas City or DC United).

While the on-field product is not always the most competitive of matches, all but one of Philadelphia's home matches versus the Red Bulls have been sell outs. Given the team's poor form this season and unrest among supporters, that streak may, however, come to end an end this weekend.

Both teams have been plagued with a number of long-term injuries this season. New York remains without center back Gideon Baah who is out for the season with a broken leg, while center back Aurelien Collin is out with an abdominal strain and winger Mike Grella may return from a knee injury but is doubtful to play.

As for Philadelphia, much to the chagrin of the fans, Maurice Edu continues to recover from left ankle/left tibia surgery. Defensively, the team appears quite depleted with Joshua Yaro another long-term absentee set to return this month at the earliest from shoulder surgery, Richie Marquez potentially missing out through illness, and Ken Tribbett doubtful with an ankle sprain. Backup goalkeeper, John McCarthy remains doubtful as he recovers from a concussion, and midfielder Ilsinho is also a doubt following a bout with illness. 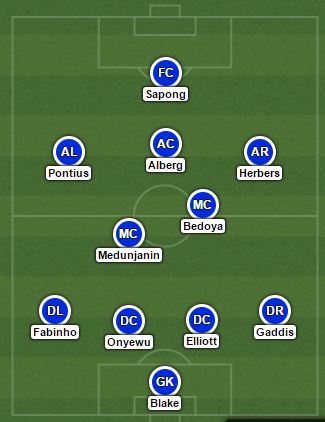 Given their injuries defensively, Philadelphia may be forced to trot out an untested partnership in central defense with Oguchi Onyewu and Jack Elliott. However, manager Jim Curtin could opt to give homegrown player Auston Trusty his first appearance of the season should he feel it necessary a left footed player fill the left center back slot vacated by Richie Marquez's illness. However, given pre-season comments from Onyewu that he was comfortable playing on either side of a center back pairing it's unlikely.

Meanwhile, Ray Gaddis may continue at right back following Keegan Rosenberry's dropping due to his loss in form. In midfield,  Alejandro Bedoya is expected to partner Haris Medunjanin once again, however, expect to see Derrick Jones at some point if the Union decide to opt for a more defensive approach late in the game. Offensively, with Ilsinho's illness, Fabian Herbers may slot in at right midfield with Chris Pontius returning to the left, or Fafa Picault and Pontius may remain the preferred wingers. Further up the pitch, expect Roland Alberg and C.J. Sapong to continue at the attacking midfield and striker positions. 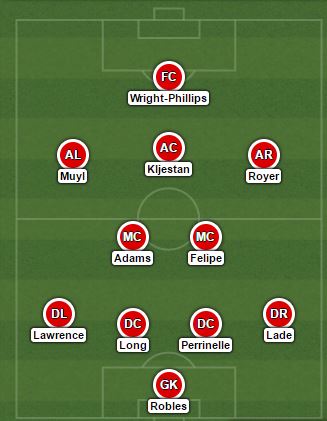 In recent matches, the Red Bulls have returned to their favored 4-2-3-1 formation, having started the season playing the 4-2-2-2 formation that Red Bull are attempting to push on all their teams globally. New York rested a handful of starters in their midweek 2-0 loss to Sporting Kansas City at Sporting Park, presumably to have them fit for the match against Philadelphia. Meanwhile, defensively, expect to see Connor Lade shift to right back in place of Sal Zizzo with Kemar Lawrence starting at left back, while Damien Perrinelle is expected to sit next to Aaron Long in central defense following Collin's injury in place of Michael Murillo who played in midweek.

In midfield, Tyler Adams and Sean Davis have split time next to Felipe but given Davis played 90 minutes versus Kansas City, expect Adams to start. Further forward, Sacha Kljestan came off the bench against Sporting but is likely to start in his favored attacking midfield role against Philadelphia. On the wings, the preferred pairing has been Alex Muyl and Daniel Royer, but with Muyl playing 90 minutes versus Kansas City and Mike Grella's potential return from injury we could see the second-year homegrown player benched for this match. Finally, Fredrik Gulbrandsen will make way for Bradley Wright-Phillips at forward, having deputized for the Englishman in midweek.

New York should be fresh having rested key starters in midweek and have shown time and time again they can score goals, particularly when it comes to Wright-Phillips versus the Union. Sapong has goals in him but with the Union expected to trot out a makeshift back line, expect them to ship goals.

Regardless of the result, expect a physical match with plenty of goals, this fixture doesn't have a ton of clean sheets historically.