I don't like cliches, and I try really hard to avoid using them as much as I possibly can. Why? They're lazy writing, they don't really inform anything, and most of them are so overused as to actively detract from what is being written, as people cringe over reading the same phrase for the six billionth time.

/ steps up to mic
/clears throat

This was a game of two halves.

I'M SORRY I'M SO SO SORRY

but it's true! The first half of this game saw the Timbers, who entered the game knowing that a win would clinch a playoff spot (and make for better positioning in the Western Conference when they do make the playoffs), trying to make things happen, and mostly failing. Vytas was apparently trying to see if soccer balls could fly, given how many balls he just bopped into the air in a vague attempt at...something, and Alvas Powell had another of his WTF Alvas moments, overrunning a perfect pass from Darren Mattocks and dribbling straight over the end line.

The second half, though? Wow. After opening the scoring right before half time thanks to a Diego Valeri penalty, the Timbers poured it on a dejected DC United side mercilessly. They scored three goals that easily could have been five or six but for some less-than-lethal finishing, and overall looked more like the team it should have looked like in the first half against a fairly abject United team who had nothing but pride and contracts to play for.

Alvas Powell. That "WTF Alvas" moment I mentioned up top? A friend of mine notes every time one of those happen. And they happen multiple times a game, generally. Alvas Powell is one of the most frustrating players I've been a fan of recently - he's got bags of talent and speed to burn, but he also can't seem to match those two things up with a footballing brain very often. But when he does? Well, when he does, this happens.

I mean, the strike itself was pretty great, but equally great was the work he did to get into position to make it, and the way he put his body in a good position to actually take the shot in the first place. If Alvas can do this more often, the meaning of "WTF Alvas" will change 180 degrees, and I can't wait until it does.

Diego Valeri. What more is there to say? With two assists on Sunday, he becomes only the second player to accumulate 20 or more goals and 10 or more assists in an MLS season (21/11) - and there's one more regular season game to go. We are watching an MVP caliber season from Valeri, and every moment of it has been a joy. 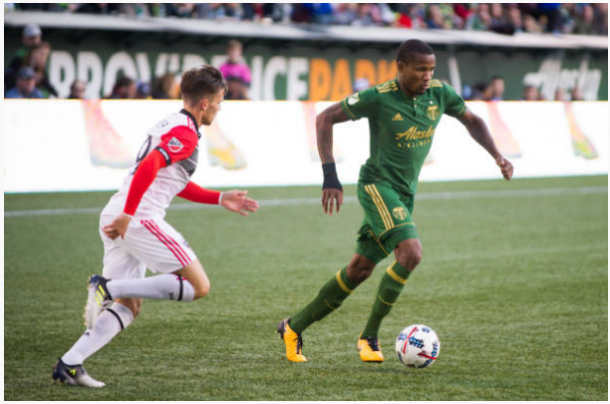 More Alvas nights like last night in the next few weeks would be great.
Image: Diego Diaz/Icon Sports via Getty Images

The first half. As mentioned, the Timbers kinda didn't come out to play in the first half. In a game with so much at stake - playoff positioning, defending one's home, etc - the Timbers came out timid, didn't really try to break down DCU all that much, and just seemed to be playing not to concede rather than playing to assert their influence on the game.

The penalty right before half time opened up DC a bit as they had to try to equalize, which allowed the Timbers to tear them apart, but there's really no good reason the Timbers couldn't have done that in the first half too. Tentative play has its time and place, but the beginning of a very winnable game probably isn't when you should be tentative.

Refereeing. This isn't a standard "MLS REFEREES SUCK" entry. This is more specific. This is calling out Mark Geiger and his assistants for doing nothing when this happened. Jeremy Ebobisse picked Steve Birnbaum's pocket, pinging the ball to Sebastian Blanco, which led to Blanco's second goal of the season. But watch the video again. Ebo's hit on Birnbaum, while legal, resulted in a clear head injury - Birnbaum hit the deck and didn't move. Play continued, as it had the right to do, but only after the goal did Geiger allow medical staff to enter the pitch and attend to Birnbaum.

While there are of course two assistant referees and a VAR that could also have stopped play, it's ultimately on Geiger that play wasn't stopped here so Birnbaum could be attended to. At the time, the game was already out of reach, so I'm not sure calling back a play that resulted in a goal would have been a big deal, but even if the game was still tight, that shouldn't matter when it comes to head injuries.

Impact get dominated by Revolution5 days ago

Impact fall to Whitecaps in Undisciplined fashion12 days ago

Impact fall to TFC at home19 days ago